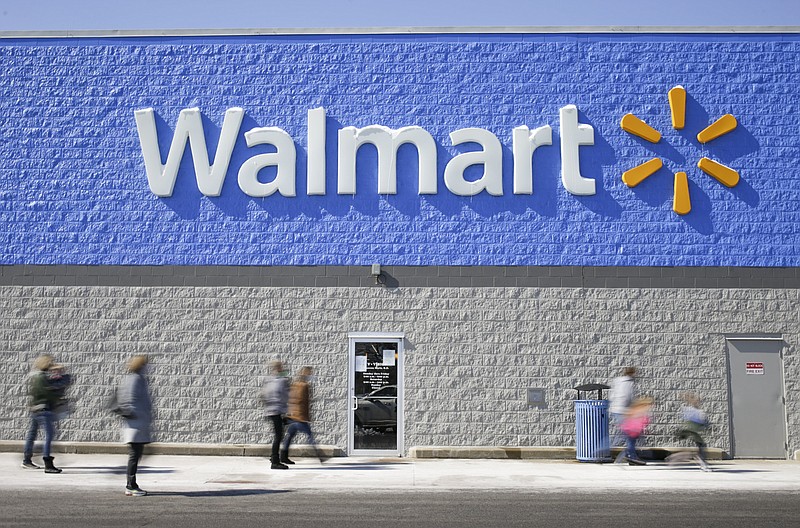 FILE - In this Feb. 18, 2021, file photo, shoppers walk along the sidewalk of the Walmart Supercenter in Bentonvile. (NWA Democrat-Gazette/Charlie Kaijo)

Before the markets opened, the Bentonville retailer reported second-quarter revenue of $141 billion, compared with $137.7 billion in the second quarter of 2020.

Doug McMillon, Walmart's president and chief executive officer, said in the earnings presentation that the company had another strong quarter in every area of its business.

"Our global e-commerce sales are on track to reach $75 billion by the end of the year," McMillon said. "We grew market share in U.S. grocery, added thousands of new sellers to our marketplace, rapidly grew advertising businesses around the world, and we're finding innovative ways to commercialize our data and build technology."

Brian Yarbrough, a retail analyst with financial services firm Edward Jones, said a lot of investors are wary because the markets have yet to see a "normalized operating environment" since the pandemic began.

"At the end of last year, we got the stimulus checks," Yarbrough said. "Then once the stimulus ended, we started seeing the child tax credit checks coming into people's homes."

Even with these extra funds, he said, investors have a lot of questions about how companies will look after the pandemic.

But Yarbrough sees the company "regaining some steam," especially with its in-house media agency, recently renamed Walmart Connect. That business "could be somewhat of a game changer" for its e-commerce platform, he said, and help it achieve profitability much faster than it otherwise would have."

Both Yarbrough and Carol Spieckerman, a retail consultant and president of Spieckerman Retail, think the additional sellers on its marketplace will benefit Walmart.

Spieckerman said the focus on an expanded third-party marketplace is already paying off, "layering on a passive revenue stream."

And shoppers' increased confidence in getting out and about "reignited dormant discretionary items like luggage and apparel that also plump up margins," she said.

"These categories also tend to benefit from the strategic merchandising and the potential for impulse purchases that in-store trips encourage," Spieckerman said. "These same dynamics helped propel Walmart's grocery business as consumers strayed from shopping lists while browsing in-store."

Regarding Walmart's efforts to mitigate ongoing supply-chain issues, Spieckerman said the retailer's scale and multicategory model have shielded it from the supply disruptions that plague smaller competitors.

Of the quarter overall, Spieckerman said, "it was a solid performance that should continue despite the latest covid-19 surge."

"Given the diversity of its platform, Walmart is poised to prevail regardless of how consumers decide to shop," Spieckerman said.

The unit's e-commerce net sales grew only 6% over last year's second quarter, which saw a 97% jump as the pandemic drove many shoppers to choose contactless options such as buying online and picking up curbside.

Its membership income rose 12.2%, and the number of members reached a record high.

Looking at the third quarter, McMillon and Brett Biggs, chief financial officer, said it's off to a good start with strong back-to-school sales, especially in apparel, shoes and other school essentials such as backpacks.

They also updated guidance for the quarter. Walmart expects to see earnings per share ranging from $1.30 to $1.40, and same-store sales at its U.S. stores to rise 6% to 7%.

A replay and transcript of Tuesday's presentation and conference call with investors are available at Walmart's corporate website by logging into http://corporate.walmart.com/newsroom/financial-events and selecting the Second Quarter Earnings Release event.