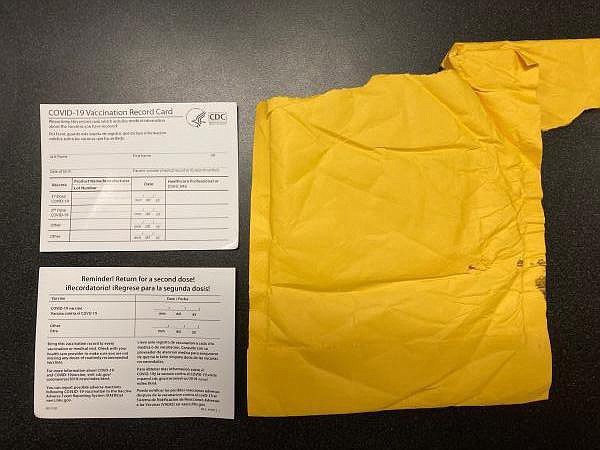 Bundles of counterfeit coronavirus vaccination cards printed with the Centers for Disease Control and Prevention logo have been shipped from Shenzhen, China, to recipients all around the United States, as some unvaccinated people try to evade restrictions that require proof of the shot to enter certain bars, schools and public spaces.

U.S. Customs and Border Protection officials said in a Friday statement that agents have seized thousands of fake vaccination cards passing through Memphis, a shipping hub.

"These vaccinations are free and available everywhere," Michael Neipert, border protection area port director of Memphis, said in a statement. "If you do not wish to receive a vaccine, that is your decision. But don't order a counterfeit, waste my [officers'] time, break the law, and misrepresent yourself."

The agents confiscated 121 packages filled with more than 3,000 fake vaccination cards, according to the the agency. Officers realized the cards were fake because the packages were not sent by the CDC or another medical organization. The forms also had errors, including misspellings, unfinished words and incorrect Spanish translations, the agency said.

Making or buying a counterfeit card violates federal laws against the unauthorized use of an official government agency's seal, which can result in a fine and up to five years in prison, according to the FBI.

As the number of coronavirus cases has swelled again with the spread of variants such as delta, many places have begun asking people to present proof of vaccination to enter public spaces where social distancing is difficult. Chicago's large, outdoor music festival Lollapalooza required concertgoers to show vaccination cards or negative coronavirus tests. San Francisco bars have ordered patrons to show proof of vaccination. And New York City mandated vaccinations for patrons to dine indoors and enter gyms.

Despite the law barring impostor cards and the heightened risk of infection for the unvaccinated population, some people have sought ways around inoculation requirements.

On Sunday, police arrested Norbert Chung, 57, and Trevor Chung, 19, in the Honolulu airport after the father-son duo allegedly used fake coronavirus vaccination cards to evade travel restrictions and fly from California to Hawaii without having been vaccinated, KMPH reported.

Last month, two travelers were fined nearly $16,000 each after they submitted fake vaccine documentation to cross the Canadian border on a flight to Toronto.

And colleges across the country that have required students and faculty to get vaccinated before returning to campus have been raising concerns that people might be submitting forged records.

Federal authorities lamented that watching for counterfeit vaccination documents has taken Customs and Border Protection agents away from other duties, including spotting potentially dangerous and illegal drugs.

"CBP Officers at the Area Port of Memphis remain committed to stopping counterfeit smuggling and helping to protect our communities," Neipert said. "But just know that when you order a fake vaxx card, you are using my [officers'] time as they also seize fentanyl and methamphetamines."