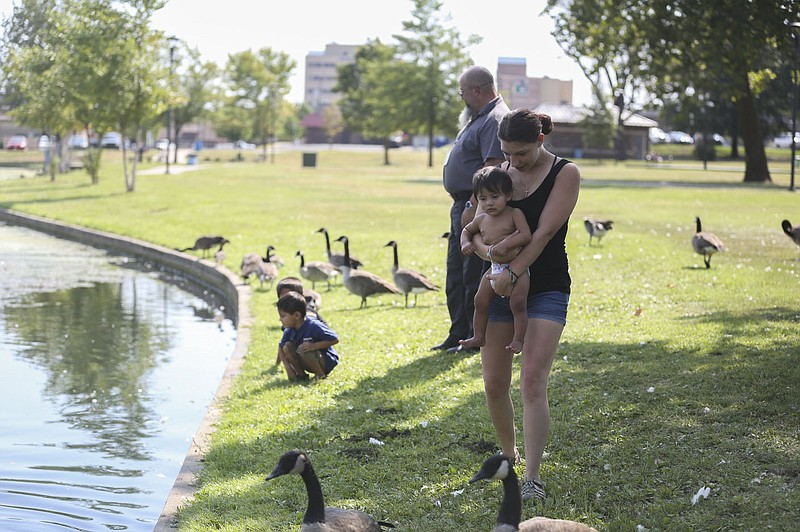 SPRINGDALE -- "No Smoking" signs might soon go up in city parks.

The City Council, working as a committee of the whole, on Monday advanced to the council a measure prohibiting smoking in the outdoor areas of the city's parks, trails, ball fields and grandstands. The council will vote on the measure at its next meeting Aug. 24.

The city ordinance would prohibit not only cigarettes, cigars and pipes, but also vaping devices, electronic cigarettes and smokeless tobacco.

City Attorney Ernest Cate said the fines for smoking in Springdale parks could run up to $500 -- the same as they are with smoking inside a city building, he said.

Representatives of the Northwest Arkansas Tobacco and Drug Free Coalition and the Community Clinic have worked with city officials to develop this measure, said Chad Wolf, director of the city's Parks and Recreation Department. The coalition help develop and provide the signs for the city's Parks and Recreation Department to post noting the restrictions, he said.

The city already prohibits smoking in city buildings, including the Recreation Center, noted City Attorney Ernest Cate. When the Arkansas Indoor Clean Air Act was passed in 2006, it did not apply to outdoor areas.

The act was amended in 2011 with the Arkansas Protection From Secondhand Smoke for Children Act, which prohibits smoking in cars with children younger than 14 years old.

"We all have learned that secondhand smoke is dangerous, and we don't want to expose kids to those chemicals," said Chris White, senior project manager for the Northwest Arkansas Tobacco and Drug Free Coalition.

Plus, seeing adults smoking can set examples and expectations of behavior for children that contradict tenets of a healthy lifestyle, he said.

People go to parks for family enjoyment and to enhance those healthy lifestyles, White continued. "So it seems counterintuitive to allow smoking in those places," he said.

The coalition, since it was formed in the late 1990s, has sponsored many events to help clean litter from parks across the Northwest Arkansas region.

White said most cigarette butts are found in the playground and pavilion areas during cleanup events -- places where children also gather. He said the volunteers pick up "thousands" of cigarette butts at each event.

But if signs are in place prohibiting smoking, people tend to refrain, White continued. He said many smokers also will stop if asked to by another person.

"Most people are law-abiding citizens and tend to follow the rules," White said. "A sign prohibiting smoking usually prevents it."

Mayor Doug Sprouse said the city has received a few calls over the years from residents asking for control of smoking in the bleachers at ball fields, but officials had no tool requiring smokers to refrain.

The new rule and the signs would provide residents and city officials something to point to when asking someone to stop smoking, Sprouse said.

Fort Smith instituted a similar program in 2017, with cooperation of the coalition, said Doug Reinert, director of that city's Parks and Recreation Department.

Reinert agreed most people police themselves. Fort Smith can charge fines if a person does smoke in restricted areas, but Reinert said he has never been notified a ticket was written by that city's police department.