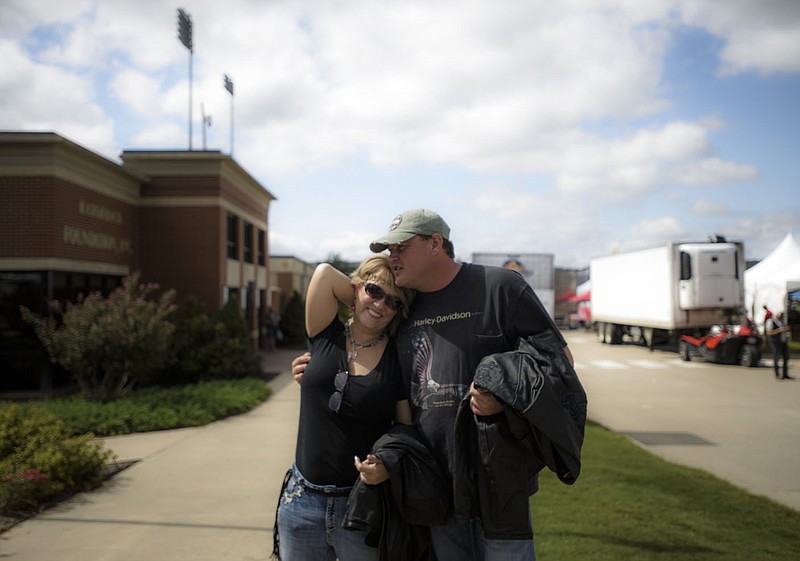 Linda Hill (left) of Tahlequah, Okla., rests her head on Joe Butler during Bikes, Blues &amp; BBQ on Sept. 28, 2018, at Baum-Walker Stadium in Fayetteville. The main stage of the festival will be at the baseball stadium this year. (File photo/NWA Democrat-Gazette/Charlie Kaijo)

FAYETTEVILLE -- The main stage of Bikes, Blues & BBQ will be at Baum-Walker Stadium this year to avoid construction work associated with the arts corridor downtown.

Performers for the festival's main stage were announced Friday and include Arkansauce, the Mixtapes, Honeyjack and Dead Metal Society.

Festival organizers announced the move to the east lot of Baum-Walker on the University of Arkansas campus in a July 17 Facebook post. The plan to move the stage from the Walton Arts Center parking lot was more than a year in the making and predated the covid-19 pandemic, said Tommy Sisemore, the rally's executive director.

Potential scheduling conflicts with development of the cultural arts corridor downtown prompted the move, Sisemore said. Construction of the civic plaza of the corridor at the Walton Arts Center parking lot is set for 2022. However, the timeline has been fluid, and the festival's board decided to make the move this year to eliminate the possibility of conflicts, he said.

Construction of a new parking deck at the Depot parking lot northwest of Dickson Street and West Avenue was originally set to start in the spring. The pandemic delayed the schedule. Construction should start next month and should last 12-14 months, said Wade Abernathy, the city's facilities manager.

That means the deck's construction will coincide with the festival, which runs from Sept. 22-25 this year. People are still invited to hang out on Dickson Street. The construction site will be fenced off.

Closing Dickson Street, like in years past, requires an event permit from the city, and the festival didn't apply for a permit. However, the Police Department can close the street for safety reasons if it deems the action appropriate.

Police Chief Mike Reynolds said he isn't sure what to expect with the crowd size this year. Officers are preparing and staffing the event largely the same way they have the past 20 years, he said. The department will close Dickson Street for motorcycles only if the crowds get large enough, he said.

Only the performers and vendors associated with the festival itself will move to Baum-Walker, Sisemore said. The vendors who sell from private property will still set up on Dickson Street, he said.

Sisemore said he hopes to see the Walton Arts Center lot and any other open private lots full of motorcycles and people enjoying the restaurants and bars downtown, which have taken a financial hit during the pandemic.

"I say that with an asterisk," he said. "I also pray that this recent covid spike knocks it off so we can all do those things."

The far more contagious and harmful delta variant of covid-19 has become the dominant strain in Northwest Arkansas in recent weeks, as it has in the rest of the nation. Cases and hospitalizations have surged as the region's vaccination rate has remained stagnant at just above 40% for people 12 and older.

Last year's rally was canceled because of the pandemic. Rallies in recent years have attracted 200,000 to 250,000 visitors, Sisemore said. Organizers are preparing for a crowd similar to 2019, he said.

Construction of the civic space of the arts corridor is set to begin in September 2022.

Mel Collier, owner of Collier Drug on Dickson Street, said he and other property owners knew the main stage was likely to move, they just weren't sure where.

Collier said he plans to have vendors on his lot this year, but he's not sure what to expect for them business-wise. He said he's not charging any of them to use his lot as a result.

The move, as well as the pandemic, puts many aspects of this year's festival up in the air, Collier said.

Peter Nierengarten, the city's environmental director who is serving as project lead on the arts corridor, said the city has been in contact with numerous groups including Bikes, Blues & BBQ on potential conflicts with the construction schedule. Decisions on whether to apply to host events are up to them, he said.

Construction of the parking deck may require some lane closings on West Avenue near the site, but it shouldn't hinder people's experiences downtown, Nierengarten said.

This year’s main stage of Bikes, Blues & BBQ will be at Baum-Walker Stadium. The lineup is as follows: