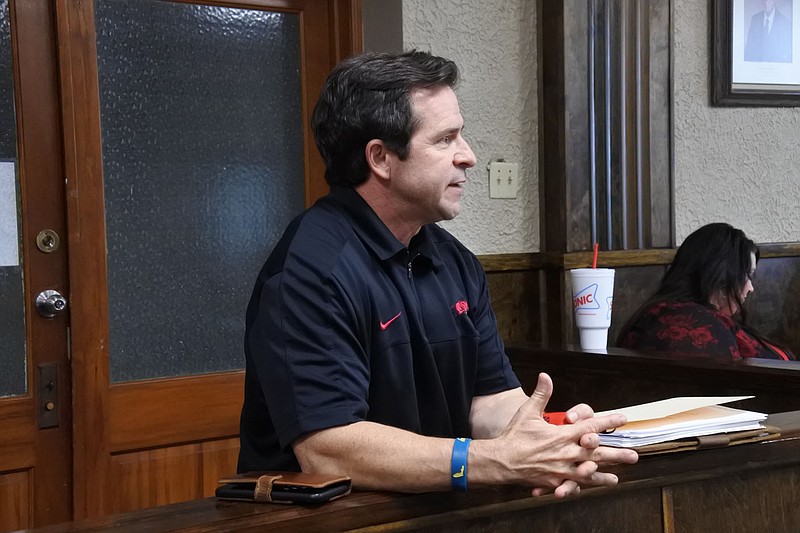 OZARK -- The process to remove a River Valley sheriff convicted of two federal felonies is already in motion.

Jeff Phillips, prosecutor for Franklin, Johnson and Pope counties, told Franklin County's Quorum Court during its meeting Thursday he filed a petition in the county circuit court that day to order the removal of Sheriff Anthony Boen, 51, from office and allow a vacancy to be declared on both an emergency and permanent basis. He had Boen served with the petition as well.

"That petition basically states that, because of his felony convictions, that he can no longer serve as sheriff of Franklin County," Phillips said.

This comes after a jury in the U.S. District Court in Fort Smith convicted Boen on Monday of two federal counts of deprivation of rights under color of law at the end of a trial that began Aug. 2. The charges stemmed from two use-of-force incidents against detainees in 2018 resulting in bodily injury. He was indicted on three counts Nov. 20, 2019, but the jury found him not guilty on one of the counts.

U.S. District Judge Timothy L. Brooks ruled Boen would be in custody before sentencing due to being convicted of felony violent offenses that injured his victims. He expects Boen to be sentenced in roughly four months.

Franklin County Judge Rickey Bowman said he asked Phillips and Christopher Brockett, attorney for the county, to help the Quorum Court with the next steps needed to declare a vacancy for the sheriff's position shortly after receiving word about Boen's convictions.

The petition from Phillips states, in addition to making a formal determination to remove Boen from office, the circuit court should enter an order removing him on a temporary basis. It recommended the temporary emergency order be in place until Boen can be served and the matter can be heard, after which the order to remove would become permanent.

The petition states this is due to Franklin County paying Boen his full salary for more than 19 months while he wasn't acting in his capacity as sheriff. It also stated, pursuant to the case law Campbell v. State (1989) 300 Ark. 570, Boen shouldn't continue drawing a salary after his felony convictions.

Boen was forbidden from entering the Sheriff's Office and had to relinquish all duties except for signing employee checks that were brought to his home per the 2019 order setting the conditions of his release on a $5,000 bond.

Brockett said the Quorum Court voted in April to end authorizing county employees to deliver Boen checks. It also established May 1 as the start of a 90-day period after which it could have voted to turn the possibility of removing Boen to Phillips. An elected official can be removed from office if he fails to do his duties for 90 days.

The Quorum Court named Rickey Denton as undersheriff on July 23, 2020, according to the minutes of that meeting. This placed him in charge of the Sheriff's Office and jail personnel.

Phillips said Thursday he'll know whether or not the temporary removal will happen "within the next few days." Boen had 60 days to answer the petition.

The Quorum Court also unanimously voted Thursday to ask Brockett to write Boen a letter asking for his resignation as a consequence of his convictions. An affirmative answer from Boen would allow the Quorum Court to declare a vacancy in Boen's position.

Brockett said the Quorum Court would appoint someone to replace Boen should he no longer be in office. This person would only serve out the remainder of Boen's term and wouldn't be able to run for the sheriff position in the 2022 election.

Brian Lachowsky, justice of the peace, said when asked about Boen's convictions he was satisfied the legal system "performed as it should" and the county will move forward from there. However, he believes it "deeply unfortunate" Boen was unable to handle the stresses that came with his position and not commit felonies.

"I'm very much a fan of the sheriff, Anthony Boen," Lachowsky said. "He's a very good man. He was under a lot of pressure, and he evidently did some things that he should not have done. I think he probably regrets them."

Lachowsky said he would be thankful to Boen if he resigned as sheriff, saying it would provide great relief to the county quickly. He also supports what Phillips has done through the county circuit court.

Jerry Dorney, chief deputy for the Sheriff's Office, said the department had no comment regarding Boen.

Boen has served as sheriff since 2011. The County Clerk's Office states his current term runs until Dec. 31, 2022.

Sheriff Anthony Boen faces up to 20 years in federal prison and additional fines as a result of his two felony convictions.