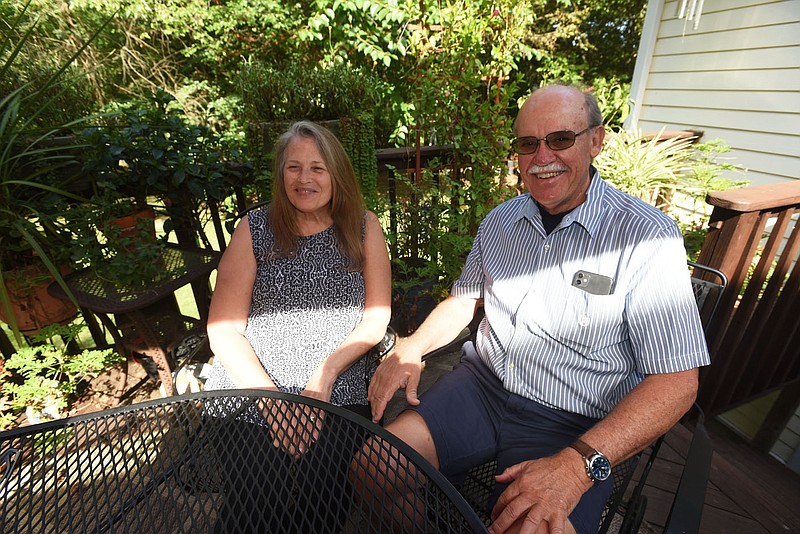 Pat (left) and Dale Adams at their home in Gentry on Wednesday Aug. 11 2021. Dale credits his vaccination from preventing major illness when he caught covid-19 after his innoculation. Go to nwaonline.com/210814Daily/ to see more photos. (NWA Democrat-Gazette/Flip Putthoff)

Dale Adams of Gentry wasn't very concerned when he developed some mild seasonal allergy symptoms in June, especially since he and his wife Pat Adams each received two doses of the Moderna vaccine two months earlier.

But a few days later Dale Adams grew worried after he noticed he lost all sense of taste and smell. He visited his doctor that afternoon and tested positive for covid-19. Meanwhile, his wife tested negative for the virus.

When the couple got home, they stayed on opposite ends of the house and Pat Adams never got sick.

"For about four days, I couldn't taste or smell anything, but I felt fine -- never ran a fever, never got chills," Dale Adams said.

At 70, Dale Adams is convinced the outcome would have been very different for him and his wife if they hadn't been vaccinated. Although he's in good health, hasn't smoked in 15 years and walks every day, he said his doctor agreed he would have been in the hospital without the vaccine.

"If we hadn't taken the vaccination, we wouldn't be here right now," he said. "We might have been in a much worse place."

Adams isn't alone. Since Feb. 1, 90.4% of cases, 92.3% of hospitalizations and 90.7% of deaths in Arkansas have been among people who weren't fully vaccinated, according to Dr. Jennifer Dillaha.

Since the delta variant became prominent in Arkansas, the state has seen a higher proportion of these "breakthrough cases" than in the past, she said. Breakthrough cases take place when people get covid-19 more than two weeks after they receive their final dose of vaccine.

This week, about 15% of active covid cases in Arkansas are in people who are fully vaccinated, Dillaha said.

"We are seeing close to that here," she said.

On Friday, 90% of the 166 people hospitalized with covid-19 in Northwest Arkansas who were eligible for a vaccine were not vaccinated, according to Martine Pollard, a spokeswoman for Mercy who released a joint statement from the region's largest health care providers.

The good news is fully vaccinated people who get infected in general do much better than people who aren't vaccinated, Dillaha said.

"The vaccine works very well keeping people out of the hospital and keeping them from dying," she said.

Breakthrough cases are happening for a combination of reasons, according to Dr. Marti Sharkey, Fayetteville health officer.

No vaccine is 100% effective, including the covid vaccines, Sharkey said. In addition, immunity from immunizations does wane a little over time, she said.

Clinical trials and real-world conditions show mRNA covid-19 vaccines, such as those produced by Pfizer and Moderna, reduce the risk of covid-19, including severe illness, by 90% or more, according to the federal Centers for Disease Control and Prevention. Most of the current data is related to the mRNA vaccines, and information about the Johnson & Johnson vaccine will be shared when it becomes available, the CDC website states.

Another problem is the delta variant is much more transmissible than the original strain of the virus, Sharkey said. For example, a person with the delta strain releases 1,260 times more viral particles into the air, she said. As a result, a person with the original strain would infect an average of two to three other people, while people with the delta variant infect an average of six to nine individuals, she said.

"It's a different beast," Sharkey said.

Dr. Kevin Davis, infectious disease specialist at Mercy Hospital in Fort Smith, said he's seeing some breakthrough cases, but in his observation, breakthrough cases are more common in older patients or in patients with immunosuppressed conditions.

"I do think there is a protective effect as (the vaccine) prevents critical disease," he said.

The delta variant is a new disease, very similar to the original covid-19 virus, but with new characteristics, Davis said.

While data from medical research is very new, and its not uncommon to see conflicting data early on, there is data that shows vaccines might provide less protection from mild cases of covid caused by the delta variant, he said.

"There is reason to be concerned there could be more breakthrough cases than originally thought, but data does suggest good protection from severe and critical disease," Davis said.

Vaccination is still by far the best way to protect people from serious illness and death, and people should also be encouraged to wear masks in indoor and congested settings, he said.

Taking the 'fangs' out of the virus

Joyce Cook, 73, and her husband Rudy Cook, 75, of Decatur believe the covid vaccine protected them from being hospitalized with the virus.

The couple received both doses of the Pfizer vaccine in March. They were on their way to get on cruise ship in Galveston, Texas, last week when Joyce Cook started to notice some sinus congestion. Her symptoms quickly became worse, and the couple turned around and came home.

"It really hit me hard," she said, noting her husband's symptoms were significantly less severe than hers even though he's a few years older and has more health problems.

"I think I possibly might not have made it (without the vaccine); there were a couple of days I was really bad," she said.

She urged everyone to get immunized.

"(Covid-19) is bad stuff," she said. "I hope that everyone will get vaccinated. I think that is the only way of controlling it. That might not even be enough."

Like the Adamses and Cooks, most people who experience breakthrough cases avoid hospitalization or death.

"I'm confident in saying, as the spread of the delta variant has dramatically increased, the number of breakthrough cases has also increased; however, the individuals who are vaccinated have better outcomes than unprotected individuals who have not been vaccinated," said Dr. Joe Thompson, president and CEO of the Arkansas Center for Health Improvement.

Vaccines do just what they advertise -- prevent serious illness and death, Sharkey said.

"For lack of better words, vaccines kind of takes the fangs out of it," she said. "Most of the breakthrough cases have been mild."

Why some people still get severely ill

The small percentage of vaccinated patients hospitalized are immunocompromised because of a variety of reasons such as age, conditions such as cancer, or because they are taking immune-suppressing medications after an organ transplant, Sharkey said.

While the Arkansas Center for Health Improvement is still analyzing data, Thompson said he clearly thinks individuals whose immune systems are compromised by factors such as chemotherapy or immunosuppressing drugs may not have received enough protection from the vaccine originally, or their protection may have waned more quickly.

"I think we will see people vaccinated with a comorbidity (two or more diseases or medical conditions) have less ability to defend themselves," Thompson said.

While Davis said he has seen some severely immunosuppressed patients who have died, people who are vaccinated definitely appear to have better outcomes.

"The people who end up critically ill on vents and dying, by and large are not vaccinated," he said.

On Thursday, the U.S. Food and Drug Administration announced a change in the emergency use authorizations for both the Pfizer and Moderna vaccines to allow booster doses for organ transplant recipients or those who are immunocompromised at an equivalent level, according to a news release.

The Centers for Disease Control and Prevention's Advisory Committee on Immunization Practices recommended Friday a covid-19 booster shot for individuals who are immunocompromised, the release states.

A study on vaccine hesitancy by the Northwest Arkansas Council released in July shows questions about side effects, safety and the speed at which immunizations were developed are among the top reasons people in the region hesitate to get the vaccine.

For Dale Adams, the risk calculation was simple. He figured the odds of him getting a serious case of covid were much higher than the odds of him experiencing serious side effects from the vaccine.

"(Vaccines) are how we beat polio and everything else," he said.

With the exception of very rare instances, seen in less than one in 1,000 cases, researchers aren't seeing side effects from covid-19 vaccines, Thompson said. The rare side effects have included allergic reaction, blood clots and very mild pericarditis in teenagers, he said.

"That is a major piece of misinformation that is dissuading the public from taking the steps to become protected," he said.

Davis said he has not seen a single patient and is not aware of a single person who has been admitted to Mercy Hospital in Fort Smith because of an adverse reaction.

Eight out of 1o people who are fully vaccinated will not become ill with covid-19, but the people who do become ill can spread it in the same way that unvaccinated people do, she said.

Because there is still a chance that vaccinated people can get infected or spread the disease, they need to take precautions such as wearing masks in public places, hand sanitizing and social distancing, all four doctors said.

It's also important for both vaccinated and unvaccinated people to get tested if they are showing symptoms, they said.

People should also get tested if they show symptoms, whether or not they have been vaccinated, because they may be eligible for preventive treatment with monoclonal antibodies, which work to keep people out of the hospital, Dillaha said.

Arkansas is the hot zone for the nation with the high levels of transmission, Thompson said. Individuals in public spaces should be wearing masks, he said.

"If you go to a grocery store, a retail space, a movie theater, you should presume the virus is in the enclosed space with you," he said.

Vaccines the way out

While there appears to be very good outcomes for vaccinated people, the longer covid-19 spread continues to happen, the more likely vaccines are to lose protective qualities, Thompson said.

"Vaccines are our answer and our way out of this, but unless we get many more people taking the vaccines it will continue to spread and be a risk to us all," Thompson said.

Each time the virus infects someone it reproduces itself, which increases the opportunity for a new variant to develop, Dillaha said. The delta variant could gain additional mutations that might make it an even worse virus, she said.

The more the virus spreads, the higher the chances of another mutation popping up, Thompson said. In the worst case scenario, there could be another mutation that makes the vaccine less effective against bad outcomes, he said.

"I don't want the Arkansas variant to be the variant the vaccine doesn't work against," Thompson said. 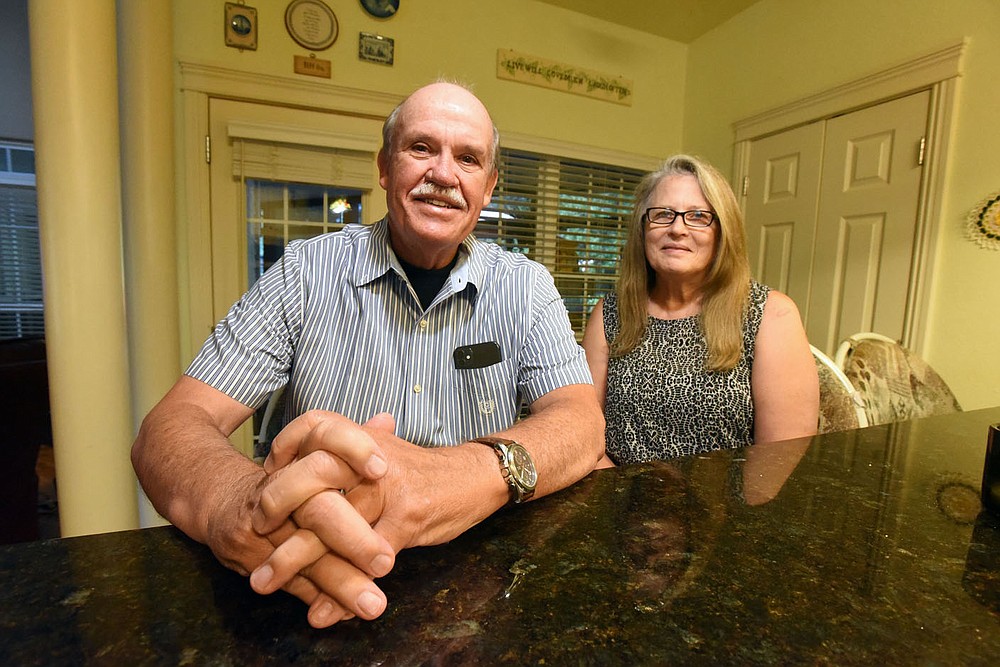 Dale (left) and Pat Adams at their home in Gentry on Wednesday Aug. 11 2021. Dale credits his vaccination from preventing major illness when he caught covid-19 after his innoculation. Go to nwaonline.com/210814Daily/ to see more photos. (NWA Democrat-Gazette/Flip Putthoff) 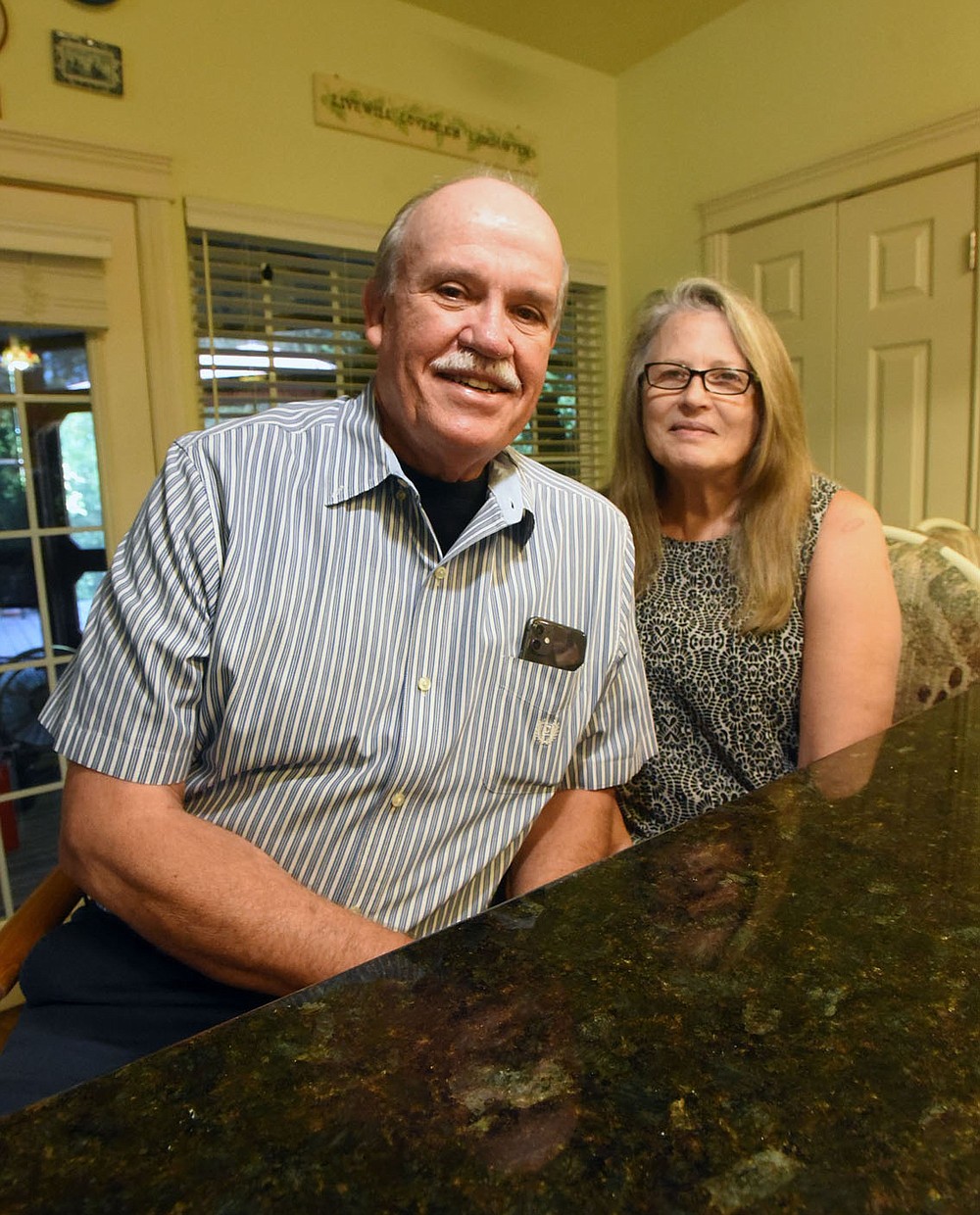 Dale (left) and Pat Adams at their home in Gentry on Wednesday Aug. 11 2021. Dale credits his vaccination from preventing major illness when he caught covid-19 after his innoculation. Go to nwaonline.com/210814Daily/ to see more photos. (NWA Democrat-Gazette/Flip Putthoff)
More News

Currently, 84.6% of active covid-19 cases are among unvaccinated individuals.