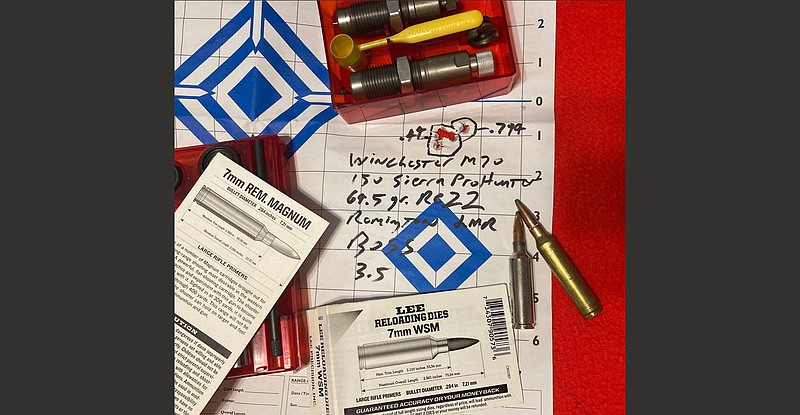 Hunters have a variety of 7mm options, including the 7mm Remington Magnum and the 7mm Winchester Short Magnum. They are ballistic twins but feature radically different cases. The author gets superb accuracy from his Winchester Model 70 in 7mm Rem. Mag. (Arkansas Democrat-Gazette/Bryan Hendricks)

The difference between a .277-caliber bullet and a 7mm bullet is only seven-thousandths of an inch, but they are a universe apart.

As mentioned last week, there are only three major options in the .277-cal. family, but the 7mm family tree has as many branches as a southern live oak. Numerically, the 7mm bullet has a diameter of .284 inch. Unlike the .277, hunters and reloaders can choose .284-cal bullets in a dazzling array of styles and weights. Only the .30-cal. is more versatile.

Until the 6.5 Creedmoor took hold, American hunters traditionally rejected cartridges with metric designations, but several 7mm cartridges are notable exceptions. The most popular, of course, is the 7mm Remington Magnum. The 7mm-08 Rem. has a loyal fan club. There's also the 7mm Weatherby Magnum, the 7mm Winchester Short Magnum, and the ancient 7x57 Mauser.

There are also a couple of Americanized variants, most notably the 280 Rem. and the 284 Win.

It is not an accident that I have more 7mm rifles than any other caliber. Their names all look cool on paper, they all roll off the tongue gracefully, and they all excel at every job you give them.

Introduced in 1962, this is America's definitive 7mm cartridge. Other sevens are more powerful, but this is the one by which all the others are judged.

It originates from a shortened 375 Holland & Holland case necked down to take a 7mm bullet. It has a distinctive belt around the base that serves no real purpose in this application, but its burly, muscular appearance bolsters the cartridge's reputation.

Through a 24-inch barrel, the 7mm Mag. launches a 160-gr. bullet around 3,000 feet per second, about the same as a 165-gr. bullet in 30-06. However, a .284 bullet is longer than an equal weight .30-cal. bullet, so the same style and brand bullet is more aerodynamic. For terminal energy and muzzle velocity, it is more comparable to the 300 Winchester Magnum.

To me, the beauty of the 7mm Rem. Mag. is its effectiveness with a such a wide range of bullet styles and weights. Admittedly, my rifle probably has a lot to do with it. It's a Winchester Model 70 Stainless with a Ballistic Optimizing Shooting System, an adjustable barrel weight that centers the barrel oscillation's sine wave at the point where the bullet exits the muzzle. I have tuned it to print groups smaller than 1 inch for loads with 140-, 150-, 162- and 175-grain bullets. This level of accuracy and versatility makes it my most versatile rifle.

As soon as I started hunting with it, the 7mm Rem. Mag. distinguished itself by making decisive, down-right-there kills. Every shot I have taken on a deer with this round has been a pass-through, with large exit wounds.

As with all cartridges, reloading allows a hunter to wring maximum velocity from the 7mm Rem. Mag. It is well behaved and easy to work with a wide range of powders.

Essentially a 308 Winchester case necked down to take a 7mm bullet, the 7mm-08 is a very popular hunting cartridge. Commercialized by Remington in 1980, it replicates 7x57 Mauser ballistics in a more efficient short-action case. Its mild recoil is comfortable for shooters of all ages and statures, making it a very easy cartridge to shoot accurately.

Most literature equates the 7mm-08 with 140-gr. bullets, but my Remington Model 700 is superbly accurate with 130-gr. Speer boat tails powered by IMR-4064 powder. It is so effective on deer of all sizes that I have never seen the need to experiment with other bullet weights.

Doug Speight of Greenbrier is a big fan of the 7mm-08, using bigger bullets for much bigger game. He took a record book bighorn ram several years ago with a custom 7mm-08.

While Remington did everything right to make the 7mm Rem. Mag., one of the most popular hunting cartridges of all time, it did everything wrong to relegate its excellent 280 Rem. to irrelevance.

Even so, the 280 is a little faster and a little more powerful than the 270 Win., and much more versatile because of the wider range of 7mm bullet weights and styles. It really shines when handloaded.

The challenge is finding rifles chambered for 280 and factory ammo to feed it. In any configuration, it is an excellent all-around big game hunting rifle, especially for Arkansas whitetails.

Winchester introduced the 7mm Winchester Short Magnum in 2001 as part of its highly acclaimed short magnum lineup that included .30-, .270- and .325-cal. variants. The 7mm version, which duplicates 7mm Rem. Mag. ballistics in a short, fat case, did not excite hunters, but the shooting/hunting media have finally warmed to it.

Like all short mags, it has a reputation for being hard to chamber. A rifle chambered in 7mm WSM is a collector's item, but it is suitable for any North American big game, especially whitetails.

I have had three 7mm WSM rifles. The first was a Mossberg All-Terrain, an excellent choice. The second was a Ruger Model 77 with a short barrel that limited its performance. My third was a Winchester Model 70 Ultimate Shadow. Light and handy with enough barrel to matter and an ergonomic, all-weather stock, it is my perfect rifle for all occasions.

Originally designed as a military cartridge, the 7x57 is a proven performer in every arena. Scottish adventurer Walter Bell killed about 800 elephants with a commercial variant known as the 275 Rigby shooting 172-gr. solid bullets.

The 7x57 is synonymous with heavy bullets and relatively low velocities. However, the Ruger Model 77 is the only modern rifle whose barrel has an appropriate twist rate for this application. My Winchester Model 70 Featherweight works best with 139-gr. soft points, which puts it in the middle of the pack of my other 7mm rifles. For that reason, I don't use it much.

For shooting down satellites and breaking up asteroids, you have the 7mm Remington Ultra Magnum, 7mm Remington Short Action Ultra Magnum, the 7mm Shooting Times Westerner and the 28 Nosler. These flat-shooting cartridges burn a ton of powder and are most appropriate for shooting across vast, wide open spaces. The 7mm Rem. Ultra Mag. has the largest case of any commercial 7mm cartridge.

The 7mm Weatherby Magnum is at the lower end of this spectrum and is the least regarded of the Weatherby line. Like the 7mm WSM, it is more of a collector's item.

If you marry into the 7mm family, the 7mm Rem. Mag and 7mm-08 are your best choices for Arkansas hunting.