At river where Tigrayan bodies floated, fears of 'many more' 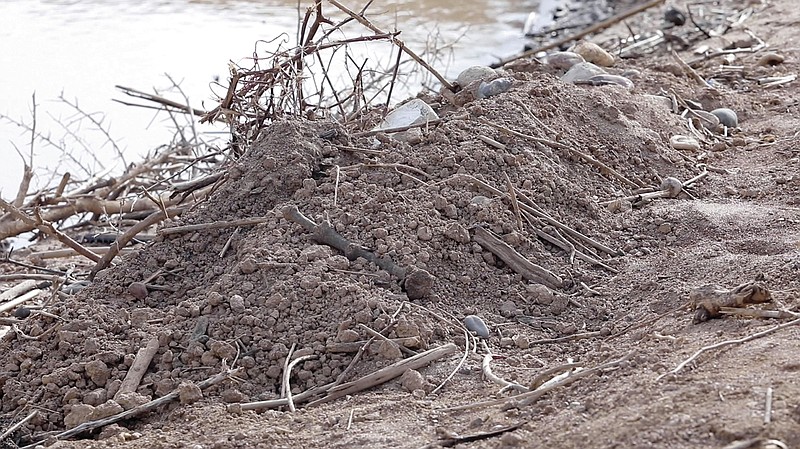 A fresh grave covered in sticks beside the Setit river at Wad el Hilu, Sudan on Wednesday, Aug. 4, 2021. Dozens of bodies have been found floating down the Setit River, known in Ethiopia as Tekeze River, in southwestern Sudan in the past week. (AP Photo/Mohaned Awad)

WAD EL HILU, Sudan -- From time to time, a body floating down the river separating Ethiopia's troubled Tigray region from Sudan was a silent reminder of a war conducted in the shadows. But recently, the corpses became a flow.

Bloated, drained of color from their journey, the bodies were often mutilated: genitals severed, eyes gouged, a missing limb. The Sudanese fishermen who spotted them, and the refugees from Tigray who helped pull them to shore, found many corpses' hands bound. Some of them had been shot.

The Associated Press reported dozens of bodies floating down the Tekeze River last week and saw six of the graves on Wednesday, marking the first time any reporters could reach the scene. Doctors who saw the bodies said one was tattooed with a common name in the Tigrinya language and others had the facial markings common among Tigrayans, raising fresh alarm about atrocities in the least-known area of the Tigray war.

"They are from Tigray," said Garey Youhanis, a Tigrayan who helped bury several bodies found Aug. 1. With a piece of red cord, he demonstrated how their hands were tied behind their backs. He squatted on the rock-strewn shore, crossed himself and prayed.

The deaths are the latest massacre in a nine-month war that has killed thousands of civilians and is now spilling into other regions of Ethiopia, Africa's second most populous country and the anchor of the often-volatile Horn of Africa. Though Tigray forces in June reclaimed much of the region as Ethiopian and allied forces retreated, western Tigray is still controlled by authorities from Ethiopia's neighboring Amhara region, who have cleared out many ethnic Tigrayans while saying the land is historically theirs. Witnesses have told the AP of watching mass expulsions.

More than 60,000 Tigrayans fled to Sudan, where thousands remain in makeshift camps a short walk from the river in the hope of hearing news from those who still arrive. Some scrutinized the bodies in the river for clues, and they have asked Sudanese police and the United Nations to exhume them for autopsies.

"In the last one week, 43 bodies were buried around this river," the surgeon from the nearby Tigray town of Humera, Tewodros Tefera, told the AP. He and other refugees believe the bodies were dumped into the river at Humera, which has seen some of the worst violence since the war began in November.

"Some had amputated limbs and legs," Tewodros said. "There was a man which we buried yesterday, his genital area was completely severed. ... So this is the kind of trauma that we're seeing of western Tigray."

He told the AP they hadn't heard of any new bodies since Tuesday, when at least seven were found. But he believes an active search along the river could reveal "many, many more," perhaps hundreds.

Ethiopia's government has accused the rival Tigray forces of dumping the bodies themselves for propaganda purposes. A "fake massacre," the spokeswoman for Prime Minister Abiy Ahmed, Billene Seyoum, told reporters on Thursday.

But the discovery has increased international pressure on the prime minister, a Nobel Peace Prize winner, at a time when his government is already accused by the U.N., the United States and the European Union of besieging Tigray and blocking food and other aid to millions of people. Hundreds of thousands face famine conditions in the world's worst hunger crisis in a decade.

Ethiopia's prime minister in recent days referred to the Tigray forces as "weeds" and a "cancer," bringing a warning from the U.N. special envoy on genocide prevention that such dehumanizing language "is of utmost concern." Ethiopia's government has said such talk is not meant to describe ordinary Tigrayans.

But the bodies in the river brought new fears of ethnic cleansing, or the forcing of a population from a region through expulsions and other violence.

"We are deeply concerned by the latest developments," the U.N. refugee agency in Sudan said Thursday. It confirmed seeing one of the bodies pulled from the river along with "what appear to be several fresh graves." It said it was unable to confirm the identifies of the dead or how they died.

Like other international aid organizations, the U.N. agency said it has no access on the Ethiopian side of the border region. Underlining that absence, the U.N. humanitarian agency on Wednesday tweeted a map showing no foreign aid group active in western Tigray. One that had worked there, the Dutch section of Doctors Without Borders, had its operations suspended by Ethiopia on July 30, accused by the government of spreading "misinformation" and illegally using satellite radio equipment.

Ethiopia's government has alleged that aid groups are arming and supporting the Tigray forces, without evidence.

"Those who want corridors for weapons and non-humanitarian goods to be brought into them continue to try to manipulate the realities on the ground in an attempt to convince the world that unfettered access is not happening" in Tigray, the prime minister's spokeswoman said. She called the Tigray forces, who dominated Ethiopia's repressive government for years but were sidelined when Abiy took office, a "terrorist organization that has hijacked the well-being of the people of Tigray."

Phone, internet and banking services remain down across the Tigray region of some 6 million people, and the U.N. says more than 5 million need help now. The Tigray forces, who have pushed into the neighboring Afar and Amhara regions and displaced more than 200,000 people, have said restoring basic services is a precondition to negotiations to end the war.

Tigray forces on Thursday entered the Amhara town of Lalibela, a UNESCO World Heritage site for its rock-hewn churches, a resident told the AP. While they entered peacefully, "yeah, we're scared," he said, worried about damage to what residents call the "new Jerusalem." He estimated thousands of fighters were there and "many people are running away." He spoke on condition of anonymity for his safety.

With the Tigray forces pushing south after threatening to go as far as the capital if needed, the U.N. humanitarian chief and the USAID administrator in visits to Ethiopia this week urged a cease-fire and talks. Sudan has offered to play a role in mediation. Sudan also could be a direct aid corridor to Tigray.

But the prime minister's spokeswoman called Ethiopia's relationship with Sudan "a bit tricky," pointing to a border dispute. "That element needs to be thoroughly addressed before Sudan can be entertained as a credible party in negotiations," she said.

For the refugees in Sudan, each body found in the river is a reminder of loved ones trapped in the fighting.

Horrified, refugees in the Sudanese border community of Hamdayet spotted one body that looked familiar. Like most of the Tigrayans killed in the war, it was a young man.

"How can I not feel the death of my brother and friend?" said one of the Tigrayans who buried him, Awet, who gave only his first name. "I'm very sorry."

The dead man's name was Robel, the surgeon Tewodros said. By the water's edge, his fingers tapping his graying temple in anxiety, he checked his phone for news of other bodies found. 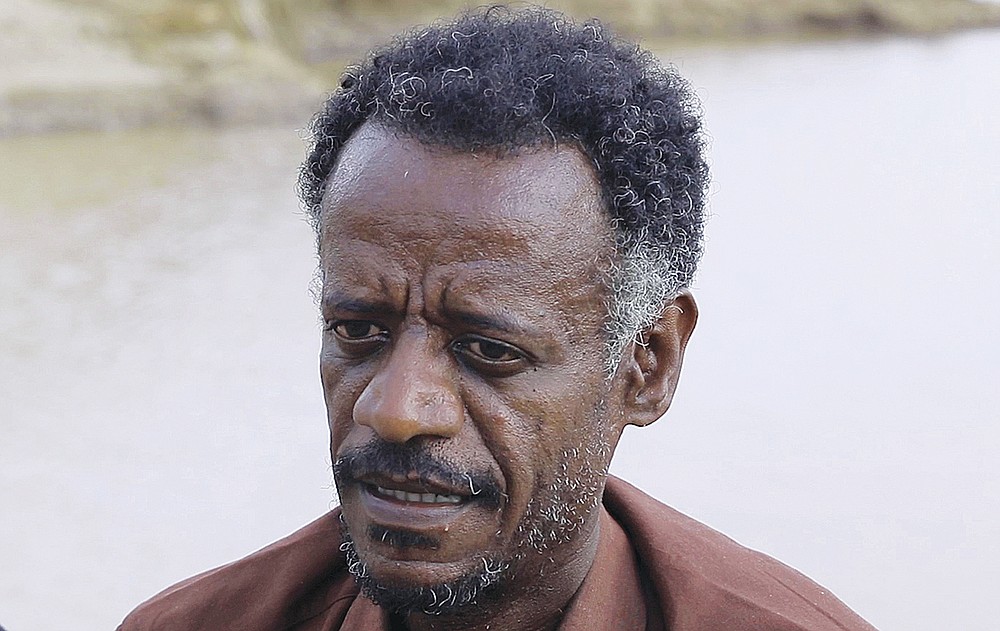 Dr. Tewodros Tefera, an Ethiopian refugee doctor who has been documenting the arrival of the bodies and their injuries, is interviewed beside the Setit river at Wad el Hilu, Sudan on Wednesday, Aug. 4, 2021. Dozens of bodies have been found floating down the Setit River, known in Ethiopia as Tekeze River, in southwestern Sudan in the past week. (AP Photo/Mohaned Awad) 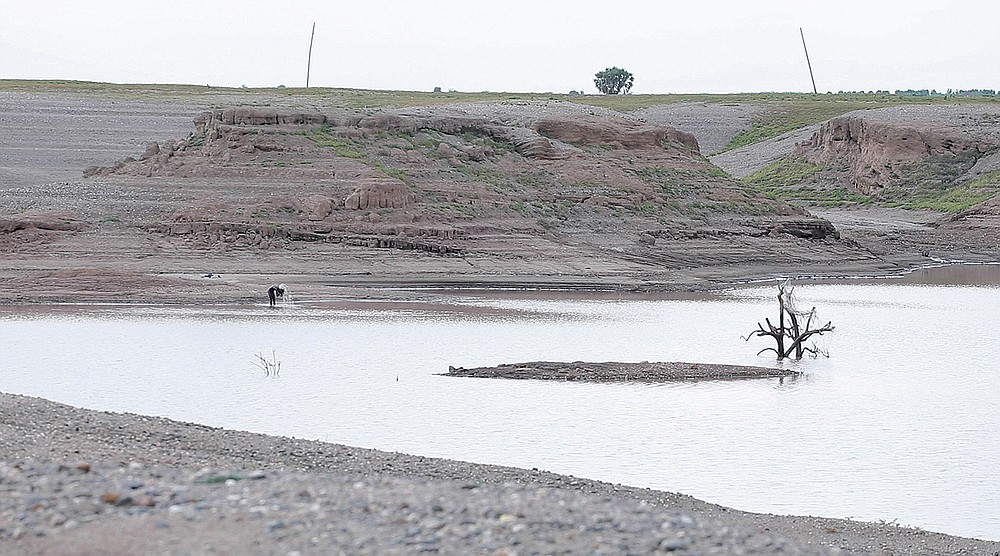 In this photo taken from a video shot on Wednesday, Aug. 4, 2021 in Wad el-Hilu, Sudan, a man washes in the Setit river, known in Ethiopia as Tekeze River. Locals and refugees have pulled dozens from bodies from the river separating Ethiopia&#x2019;s troubled Tigray region from Sudan in the past week, many with bullet wounds and their hands bound. Witnesses say that they are ethnic killings committed by Ethiopian government forces of Tigrayans, and that the bodies are being dumped to conceal the evidence. There was no immediate comment from the Ethiopian government but it has denied ethnic killings in the past. (AP Photo/Mohaned Awad) 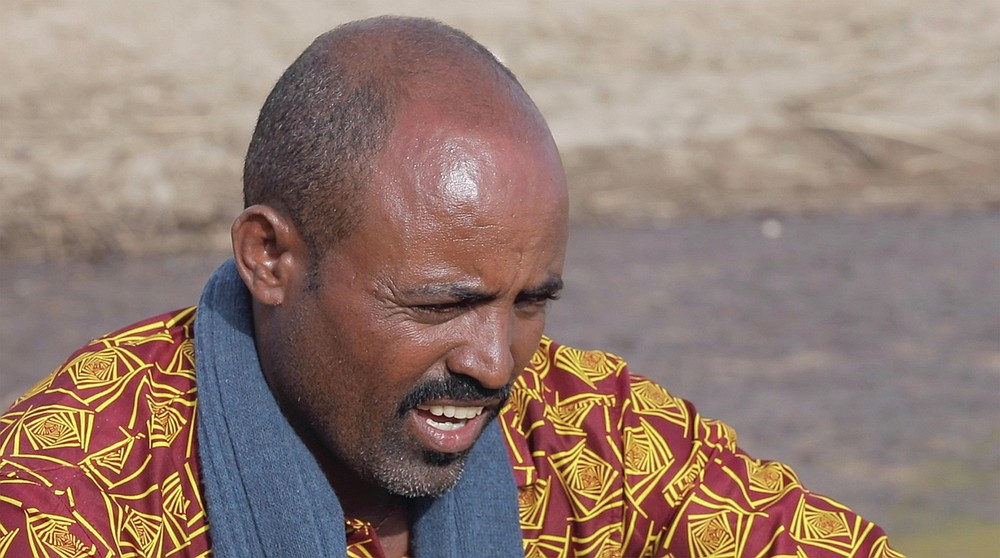 Garey Youhanis, an Ethiopian from Tigray who is living in Sudan and was one of the men who found dead bodies in the Setit river, sits during an interview beside the river at Wad el Hilu, Sudan on Wednesday, Aug. 4, 2021. Dozens of bodies have been found floating down the Setit River, known in Ethiopia as Tekeze River, in southwestern Sudan in the past week. (AP Photo/Mohaned Awad) 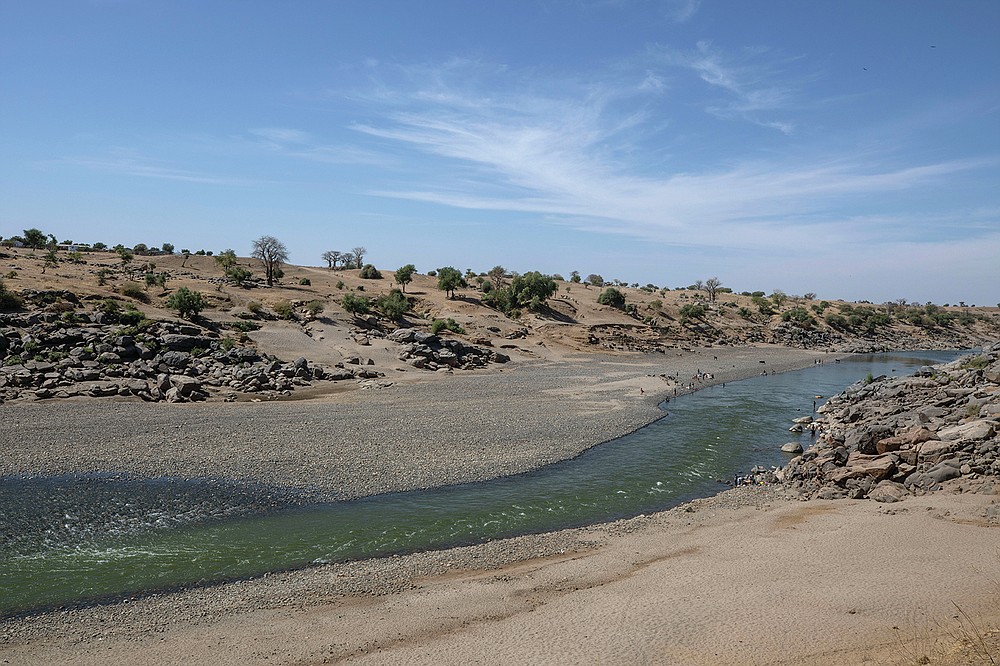 FILE - In this Dec. 15, 2020 file photo, a general view of the empty banks of the Tekeze River, on the Sudan-Ethiopia border after Ethiopian forces blocked Tigrayan refugees from crossing into Sudan, in Hamdayet, eastern Sudan. Ethiopia is at left, and Sudan is on the right. Dozens of bodies have been found floating down the Setit River, known in Ethiopia as Tekeze River, in southwestern Sudan in the past week, Wednesday, Aug. 4, 2021. (AP Photo/Nariman El-Mofty) 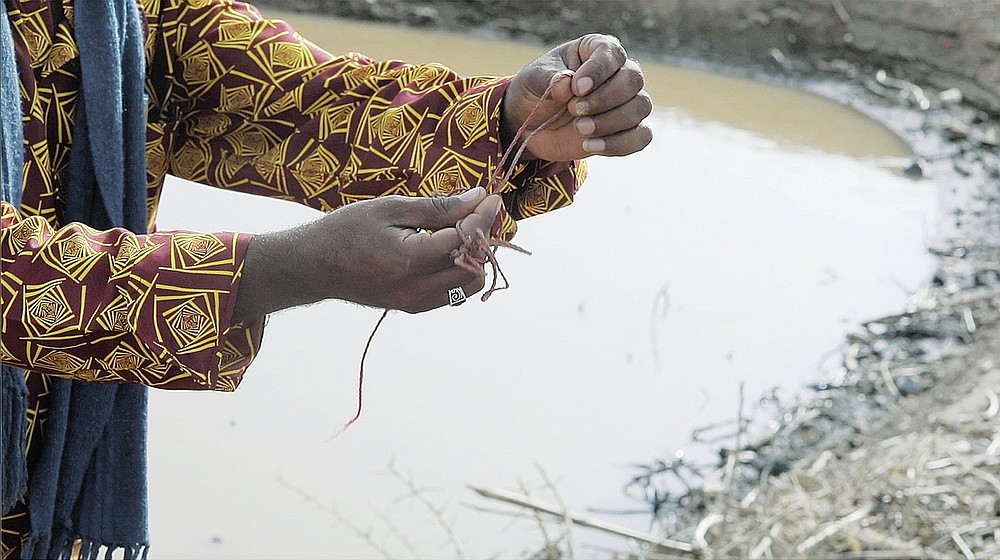 The hands of Garey Youhanis, an Ethiopian from Tigray who is living in Sudan and was one of the men who found dead bodies in the Setir River demonstrates with a red cord how the bodies had been tied at Wad el Hilu, Sudan on Wednesday, Aug. 4 2021. Dozens of bodies have been found floating down the Setit River, known in Ethiopia as Tekeze River, in southwestern Sudan in the past week. (AP Photo/Mohaned Awad)

Print Headline: At river where Tigrayan bodies floated, fears of 'many more'