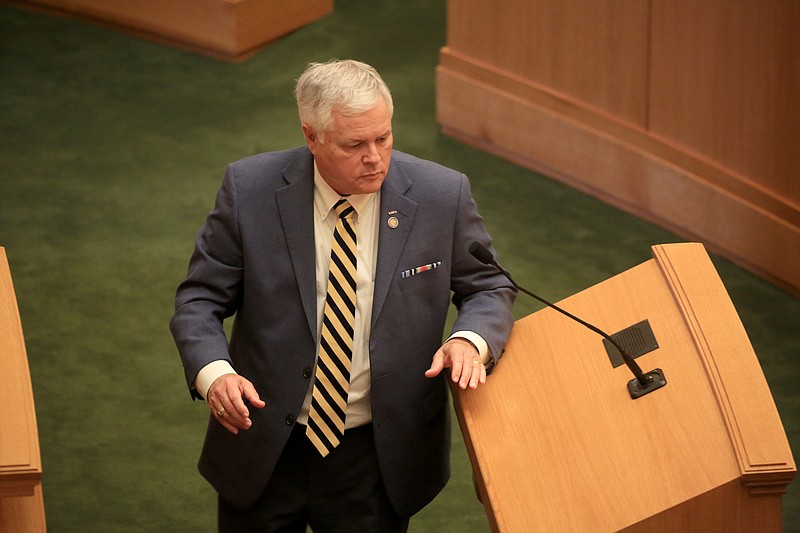 Rep. Brandt Smith, R-Jonesboro, goes to the podium Tuesday April 27, 2021 to ask members of the House to override the veto of SB 298. More photos at arkansasonline.com/428leg/. (Arkansas Democrat-Gazette/Staton Breidenthal)

"I'd been thinking about it for some time, but today, I finally decided I'm going to go ahead and make an announcement and run," he said.

Smith informed several members of the Craighead County Republican Committee of his decision earlier in the day and "word spread pretty quick," he said.

"I respect Rick. I just think I can do a better job," he said.

Crawford, who also lives in Jonesboro, has failed to keep in touch with grassroots party activists and the people he serves, Smith said.

"We don't see him at our county committees," the state representative said.

"He floats in and floats out of different things, but he's just not as accessible to the constituents in the 1st Congressional District," Smith said. "I think that's something that ought to be very important for any congressman."

Crawford's absence has been noticed, he said.

"I've just been told repeatedly over the last couple of years that the people would like to have more touch with their congressman and I thought, 'I could do that,'" he said.

Thursday evening, a spokeswoman for Crawford declined to comment on Smith's candidacy.

In the interview, Smith did not question Crawford's conservative credentials or criticize his voting record.

"We may not be as far apart on some of the policy issues," Smith said. "It's more about personality and leadership."

If elected, "I do know that I would be more vocal regarding the southern border and the chaos shown in the news that we see every day," he said.

"I would really be tackling issues like human trafficking [and] the illegal drugs that are pouring into our country. And I would be a fiscal conservative," he said. "I think there's unrestrained spending at the federal government level, and you've got to be verbal and bold to say, 'Enough is enough.' And I don't think we're seeing that out of Washington, D.C. these days from either side of the aisle."

Smith said he has been an accessible state representative.

"We're in special session right now, and my phone rang until 10:30 [or] quarter to 11 last night and I took every call," he said. "I'm not going to push people off when they've got a real, legitimate concern. It may not be a long conversation, but they need to know I'm listening."

Smith, 62, is vice chairman of the Arkansas House Judiciary Committee. He's also a member of the Joint Performance Review Committee and the House Committee on Agriculture, Forestry & Economic Development, according to the House's website.

This is his fourth term.

Smith holds a bachelor of arts degree in behavioral sciences from National Louis University; a master's degree in religion and education from Mid-America Baptist Theological Seminary; and a doctorate in organizational management and leadership from Capella University.

A former missionary with the International Mission Board of the Southern Baptist Convention, Smith has also been a humanitarian aid worker, social scientist and a college professor, he said.

In addition to serving in the Legislature, he also teaches at Liberty University.

"I stay busy. I get up earlier than most and stay up a little later than the rest of us, just to do my job," he said.