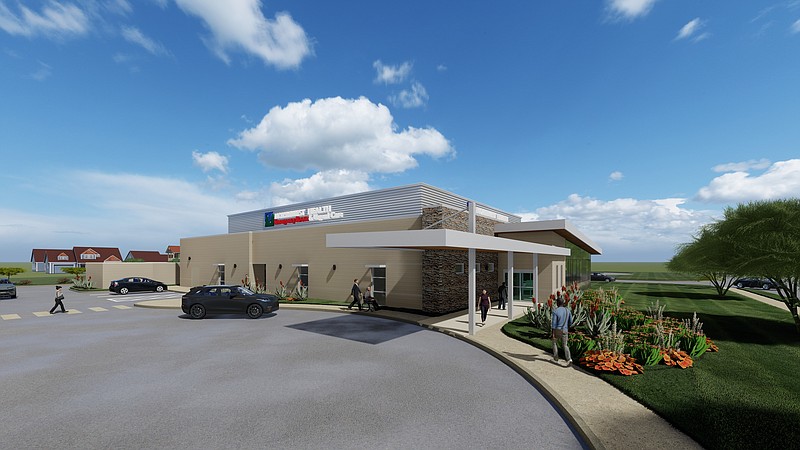 An architectural rendering of a new Northwest Health facility that will be a combined freestanding emergency department and urgent care on Bentonville's west side. The 11,000-square-foot facility at the intersection of East Centerton Boulevard and Southwest Tater Black Road will be a department of Northwest Medical Center Bentonville. (Courtesy photo)

BENTONVILLE -- Northwest Health is building a combined freestanding emergency department and urgent care on the city's west side.

The 11,000-square-foot facility at the intersection of East Centerton Boulevard and Southwest Tater Black Road will be a department of Northwest Medical Center Bentonville, according to a news release. It will be the first in the region to offer emergency and urgent care under one roof, the release states.

The facility is scheduled to open by the end of the year.

"Our primary goal is to provide the residents and visitors of west Bentonville and Centerton area with faster access to emergency and urgent care services," said Patrick Kerrwood, chief executive officer for Northwest Medical Center Bentonville.

The facility will be equipped to handle emergencies like a hospital, but if patients don't need acute care, they will receive and be billed only for urgent care services, Kerrwood said. It will have 12 private exam rooms as well as on-site labs, X-ray, ultrasound and computed tomography, the release states. Services will be available around the clock.

"This means that as a patient, you do not have to try to decide which type of location to go to when you need immediate care," he said.

Ambulances will be able to transport patients to Northwest Health Emergency & Urgent Care, according to spokeswoman Christina Bull.

If an emergency situation requires care beyond what the department can provide and a full-service hospital can be accessed in a reasonable time, then patients will likely be transported to the nearest hospital, she said.

If a patient does need to be admitted to a hospital, Northwest Health can easily transfer patients via ambulance to a facility of their choice, Bull said.

Northwest Health Emergency & Urgent Care will be in Bentonville on the border with Centerton. Centerton Mayor Bill Edwards said having an emergency room so close to his city will be good for the growing community of 20,000 residents.

Northwest Medical Center in Bentonville is seven or eight minutes away from Centerton while the new facility will just be one or two minutes, Edwards said. He noted the city already contracts with Northwest Health for ambulance service.

"In a dire emergency, that is very close," he said.