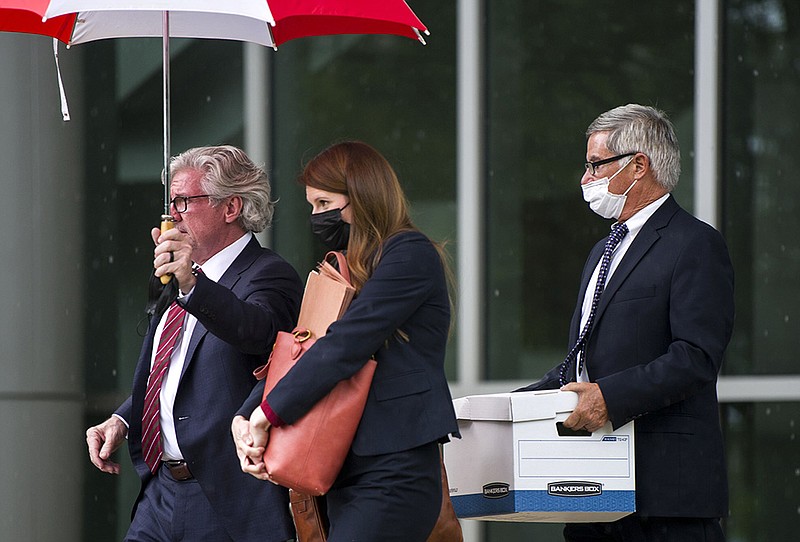 J. Blake Hendrix, left, and Annie Depper walk with Gilbert Baker as they leave the Federal Courthouse after the first day of his trial on Monday, July 26, 2021. Baker is accused of bribing former Circuit Judge Michael Maggio as part of a scheme to get Maggio to lower a financial judgement against Greenbrier Nursing and Rehabilitation Center in the death of patient Martha Bull, according to a 2019 federal indictment. The trial is expected to last as long as three weeks. (Arkansas Democrat-Gazette/Stephen Swofford)

The sixth day of testimony in the Gilbert Baker bribery trial began with Baker's former boss from University of Central Arkansas taking the stand Wednesday to say Baker lied to him about his lobbying activities for others while he was on the UCA payroll.

Baker, 64, is accused of bribing former Faulkner County Circuit Judge Mike Maggio to reduce a $5.2 million jury award against Greenbrier Nursing and Rehabilitation Center in 2013 in a lawsuit filed by the family of Martha Bull. Bull died two weeks after being admitted for a one-month rehabilitation stint at the center, which is owned by Michael Morton of Fort Smith. Maggio pleaded guilty to bribery in 2015 and was sentenced to 10 years in prison.

After the testimony of Tom Courtway, who served as president of UCA from 2011 until 2017, the government's attorneys, assistant U.S. attorneys Julie Peters and John Ray White, rested their case.

Courtway said that he fired Baker from his $132,000 position lobbying the state Legislature on behalf of the university after receiving confirmation that Baker was also performing lobbying duties for outside entities but his testimony was unclear as to the connection between Baker and the bribery conspiracy alleged by the government.

Courtway did testify that after Baker was hired by the university in 2013, his duties included fundraising for UCA and lobbying on behalf of the university at the state and national levels. Courtway said both lobbying and fundraising were important functions because state support of public colleges and universities has eroded in recent years, to the point that state funding makes up only about 35% of the overall budget for universities in Arkansas.

"The formula is really complicated," he said, "how the money flows from the state to the institutions and that's the biggest one."

Courtway said when he hired Baker, the former lawmaker was to be responsible for keeping in contact with the General Assembly and in Washington, D.C., on issues important to UCA, and to engage donors to keep contributions flowing to the university. The intent, he said, was for Baker to work full-time on those areas for UCA.

Courtway was adamant that he had talked with Baker prior to his hiring, and had told him that his fundraising and lobbying efforts for others would not be compatible with his UCA employment. He said Baker would be allowed to fundraise for political candidates in a limited capacity but that his lobbying activities would have to be limited to UCA.

"When you walk into the Capitol, you've got to have one hat on," he said. "It's important that when he walked in there they knew he's a UCA employee. To the extent you're working other issues, you're diluting your effectiveness."

Courtway said Baker told him he had some outside interests in tort reform and was working to raise funds for political candidates, which he said he told Baker would not be a problem so long as none of those activities interfered with Baker's UCA duties.

"I didn't want him lobbying for groups outside of UCA," Courtway said. "We did have a discussion ... that he wanted to do a little bit of work on tort reform. ... I said I don't really have a big problem with that as long as it doesn't affect your UCA job or anything you're doing for us."

When information reached Courtway that Baker was lobbying on behalf of others, he said, Courtway told Baker to stop. He said Baker lied to him, telling him he had divested himself of any ownership or other role in LRM Consulting, the lobbying firm Baker established when he left the Senate, and that he subsequently lied to him about his relationships with Morton and with Maggio.

"Did you talk to Gilbert Baker about his connection to the PACs?" asked Peters.

"Yes," Courtway replied. "He said he had nothing to do with them."

"What did he say about the connection between Mr. Morton's donation and Judge Maggio's campaign?" Peters asked.

"He said it had nothing to do [with it] and it was just donations to a campaign," Courtway replied. "I wasn't really concerned with that. I was concerned with [the $100,000 donation] and to make sure that it was OK."

But, Courtway said, when it became apparent that Baker was lobbying for others and had lied to UCA, and as his ties to numerous political action committees and controversy over those activities continued to hit the news, he said Morton's $100,000 donation to the university became a problem, as did Baker's employment. He described a meeting with Baker at UCA in March 2014 as "tense."

"I told him we were sending the donation back to Mr. Morton, which we did on March 24, and at that meeting I asked him to resign," Courtway said.

"Why did you ask him to resign?" Peters asked.

"The publicity that had been generated was not in the interests of the university, No. 1," Courtway said. "No. 2, I felt like throughout this episode -- particularly in the spring of 2014 -- he had not been truthful with me."

During cross examination by defense attorney Blake Hendrix, Courtway said that Baker was hired because of his experience with the Legislature and higher education issues and for his budget expertise. Baker served on the Joint Budget Committee in the General Assembly as well as the Higher Education Committee during his time in the Senate.

"Is the ability to have a seat at the table in the Legislature, is that a fair way to say what lobbying is?" asked Hendrix.

"And Gilbert was the guy because of that experience?" asked Hendrix.

An internal audit performed after Baker's resignation and released on May 30, 2014, that looked at various aspects of the Conway Republican's job and political activities and his handling of Morton's $100,000 donation to the university found "no evidence that Mr. Baker had committed egregious acts or fraud against the University as it relates to his duties as an administrator at UCA."

After Courtway's testimony, Peters and White rested the government's case against Baker. Chief U.S. District Judge D. Price Marshall denied defense motions for a directed verdict of acquittal, saying the government had provided sufficient evidence for the jury to consider Baker's guilt or innocence. Hendrix and fellow defense attorney Annie Depper maintained that the government's case had failed to provide evidence of any agreement between Baker and Maggio and that Maggio's own testimony provided evidence that no such agreement had ever existed.

Hendrix argued that Maggio's testimony before the jury last week indicated that he was unaware of any bribe at the time the bribe was supposed to have been tendered, thus rendering any contention that an agreement existed between Baker and Maggio to be false.

"There was no agreement," Hendrix said. He said Maggio's testimony indicated that at the time of the ruling in the nursing home case, Maggio himself said he was unaware of any attempt to bribe him -- that he had only become aware he might have been manipulated much later -- until as much as a year after the conclusion of the nursing home trial.

"The inference can be drawn from the Morton-Baker-Maggio connections and interactions," Marshall said. "Mr. Morton conceded [the timing of the donations] looks horrible and I think the jury can reasonably infer that it not only looks horrible, that it was criminal."

"My opinion of his reputation in the community is that he is untruthful," Hiland testified.

Hiland was asked if Maggio's decision to run for the Arkansas Court of Appeals was prompted by his eroding viability for re-election to his circuit judge post in Faulkner County.

"I know at one point there were concerns that he was damaged in the community," Hiland replied.

The defense team's case will resume at 8:30 this morning.