RECIPES: Mix alcohol with classic barbecue sauces to add some zing to your meals 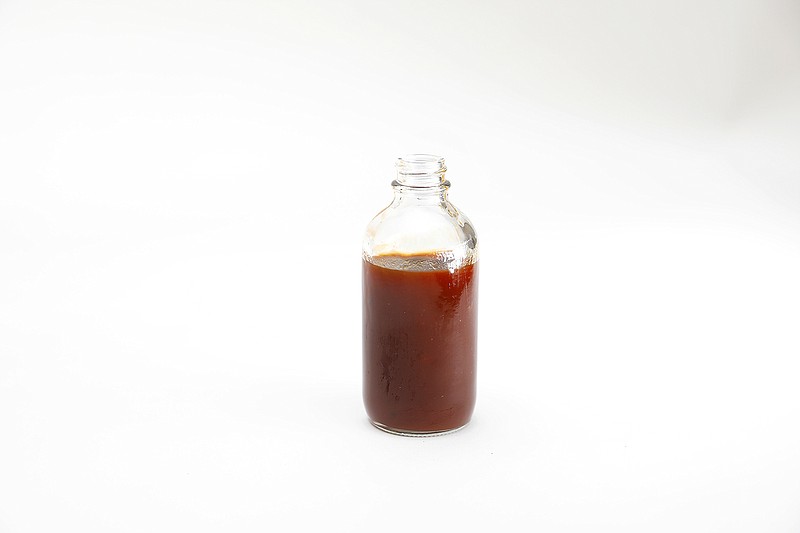 During the past year, I turned to a daily cocktail (or two) to help get through this pandemic (just me?). I experimented with syrups and bitters, perfected my orange twist and went through many bottles of booze.

Recently, I immersed myself in using some of those bottles to create lots of flavorful barbecue sauces — using the alcohols' distinct flavors and aromas to complement those of the other ingredients — that you can make now and keep in your fridge to use at a moment's notice.

For my Jack-and-Coke sauce, good old-fashioned whiskey adds a dry punch to a traditional ketchup-and-vinegar-based sauce sweetened with cola and caramelized onions. In the same vein, but with a twist, my Stone Fruit & Scotch BBQ Sauce gets its sweetness from peach preserves (you can use plum, apricot or cherry too) and is balanced with the smoky tinge of blended Scotch.

If you love honey mustard, then try my Golden Honey Mustard Sauce With Rum and Turmeric, which uses the punch of rum for a more complex sweetness that is balanced with the earthy kick (and vibrant color) of ground turmeric.

The sweetness of bourbon works with the heat of fresh chiles and a complex mix of warm spices to bring harmony to the Moroccan-Spiced BBQ Sauce from Zuzu, a Spanish-inspired restaurant in Napa, Calif.

Expanding beyond smooth sauces, my Pineapple Chutney With Mezcal and Vanilla Bean utilizes the booze's tell-tale smokiness to add character to the tropical sweetness of pineapple and vanilla bean, pod and all. And my favorite condiment gets a south-of-the-border makeover in Tomatillo & Tequila Chow-Chow. The relish, typically made with green tomatoes and bell peppers with lots of vinegar and sugar, instead uses tart, firm tomatillos and serrano and habanero chiles for plenty of heat. Sweet at first, then spicy at the end, the earthy agave liquor seamlessly blends each flavor with the next.

Some are more traditional barbecue sauces — sweet and tangy and spicy — meant for brushing on grilling chicken or splashing on hearty pulled pork, while others are relishes meant for spooning onto cooked meat, seafood and vegetables or using as a spread on the sandwiches you'll make with all the leftovers. Because once you make these sauces, you'll find plenty of excuses to use them, whether your bar is stocked or not. 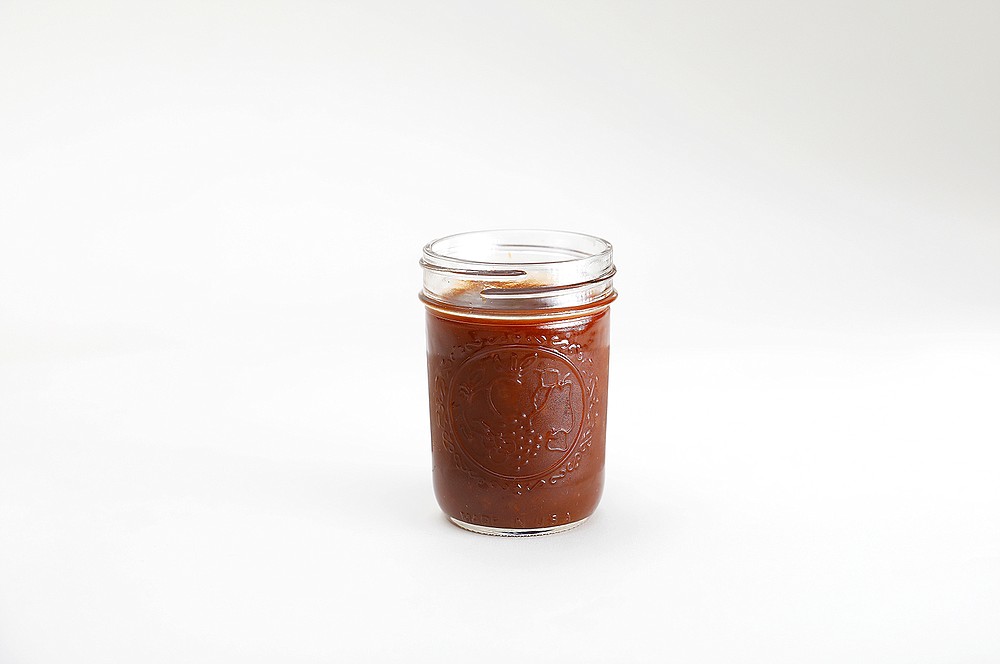 The sweetness of cola and whiskey are the ideal foundation for a complexly layered barbecue sauce that works brilliantly as a rib glaze as well as a sauce to pass around the table for slathering over grilled chicken, pulled pork or slices of beef brisket. Be careful to stir the onions often so they brown evenly but don't burn. Otherwise, they'll make the sauce bitter.

Heat the oil in a small saucepan over medium-high heat. Add the onions and cook, stirring, until soft and evenly browned at the edges, 8 to 10 minutes. Add the tomato paste and garlic and cook, stirring to combine both with the onions, for 30 seconds. Pour in the whiskey, bring to a boil and cook until reduced to a thick sauce, 2 to 3 minutes.

Add the ketchup, vinegar, brown sugar, Worcestershire, salt and soda; bring to a boil. Reduce the heat to maintain a steady simmer and cook, stirring occasionally, until reduced by about a third and thickened, 15 to 20 minutes. 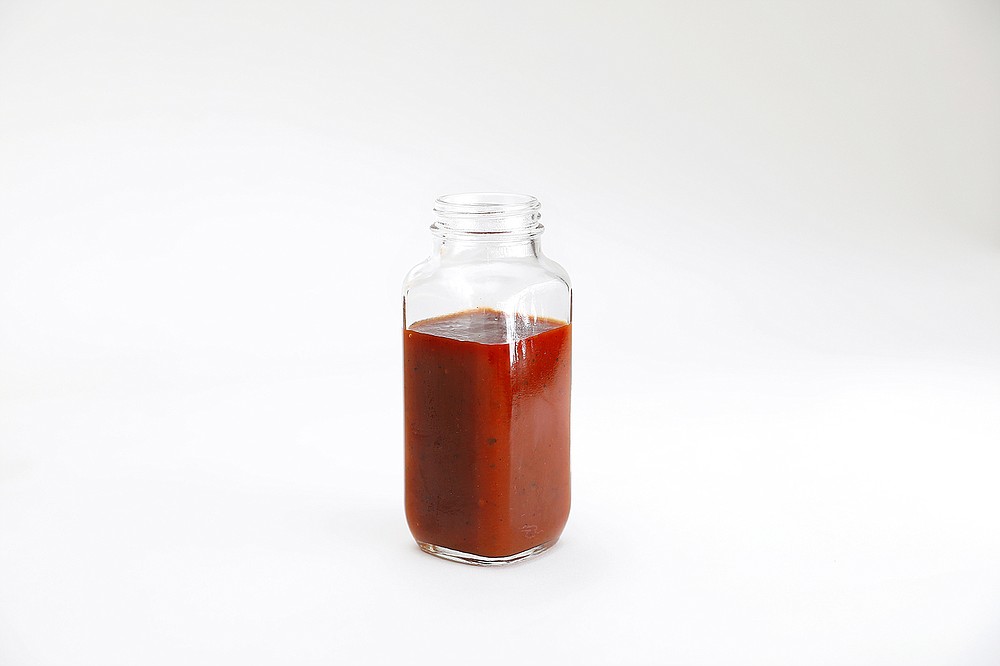 This tomato-based barbecue sauce uses peach preserves to add a fruity sweetness (you can also use apricot, plum or cherry), balanced by the light smokiness of Scotch, while whole peeled tomatoes add acidity and tang. Brush the sauce on pork ribs or chicken, but also try it on salmon fillets or swordfish.

Bring the Scotch to a boil in a small saucepan and cook until reduced by half, about 2 minutes. Pour in the remaining ingredients, crushing the tomatoes with your hands as you add them or with a spoon or potato masher in the pan; return to a boil. Reduce the heat to maintain a steady simmer and cook, stirring occasionally, until reduced slightly and thickened, about 15 minutes.

Remove the pan from the heat and pour the sauce into a blender, or use an immersion blender, and puree until smooth. Transfer the sauce to an airtight storage container and let cool to room temperature. Refrigerate until ready to use. Sauce will keep for up to 1 month. 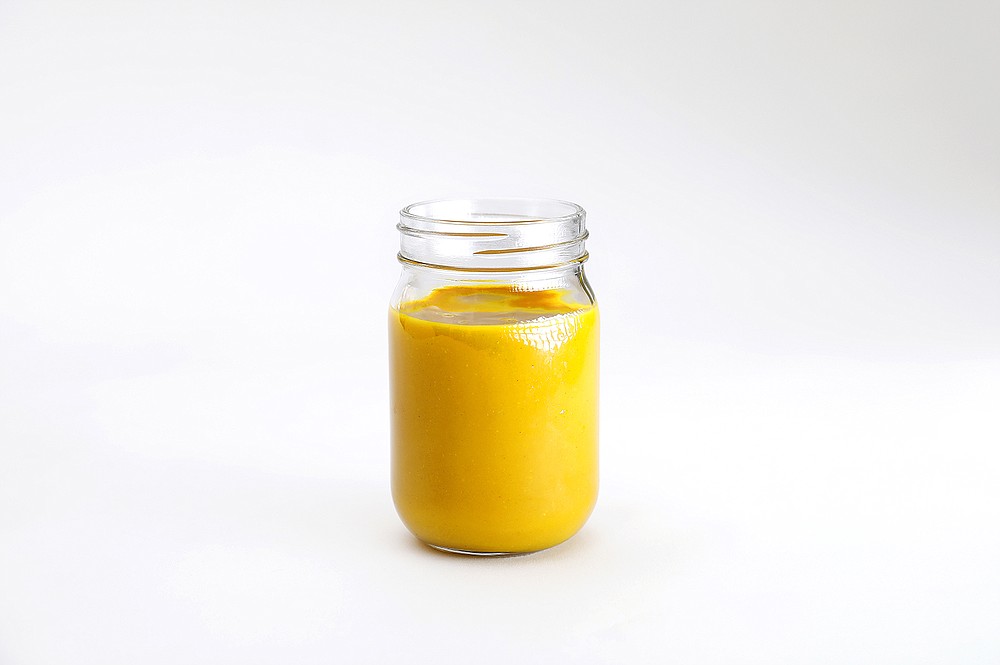 Bright yellow, spicy and earthy all at once, ground turmeric adds complexity to regular honey mustard sauce, balanced here with a splash of Worcestershire sauce and golden rum. While it's a great dipping sauce for chicken tenders or anything coming off the grill, try it as a coating for chicken wings or grilled vegetables and as a marinade and grilling sauce for tofu or veggie burgers.

Bring the rum to a boil in a small saucepan and cook until reduced by half, about 2 to 2 ½ minutes. Stir in the remaining ingredients and bring to a simmer over medium-high heat. Reduce the heat to medium-low to maintain a gentle simmer and cook, stirring occasionally, to marry flavors and thicken slightly, about 10 minutes.

Remove the pan from the heat and let the sauce cool completely. Transfer the sauce to an airtight container and refrigerate at least 8 hours before serving. Sauce will keep for up to 1 month.

This intensely aromatic and spicy sauce comes from Zuzu restaurant in Napa, Calif., and is filled with 20 ingredients, all of which are essential to its final flavor. Bourbon helps elevate the sweetness of the ketchup and honey to balance out the headiness of the warm spices and fresh chiles. Serve this sauce with lamb, game, dark meat chicken or any other protein that can match its bold flavor.

Heat a medium saucepan over medium-high heat. Add the black peppercorns, coriander, cardamom, cloves, cumin, star anise and the cinnamon stick and cook, stirring, until all the spices are lightly toasted (look for the cumin to turn a shade darker), 2 to 3 minutes.

Pour in the bourbon to stop the spices from cooking; if using a gas stove, remove the pot from the heat beforehand so the alcohol doesn't catch fire. Bring the bourbon to a boil and cook until reduced by half, 1 ½ to 2 minutes. Add the remaining ingredients and return to a boil. Reduce the heat to maintain a steady simmer and cook, stirring occasionally at the beginning and more frequently toward the end, until the sauce is reduced by about half and is syrupy, about 30 minutes.

Pour the sauce through a fine strainer into a bowl and let cool to room temperature. Transfer the sauce to an airtight container and refrigerate until ready to use. Sauce will keep refrigerated for up to 1 month. 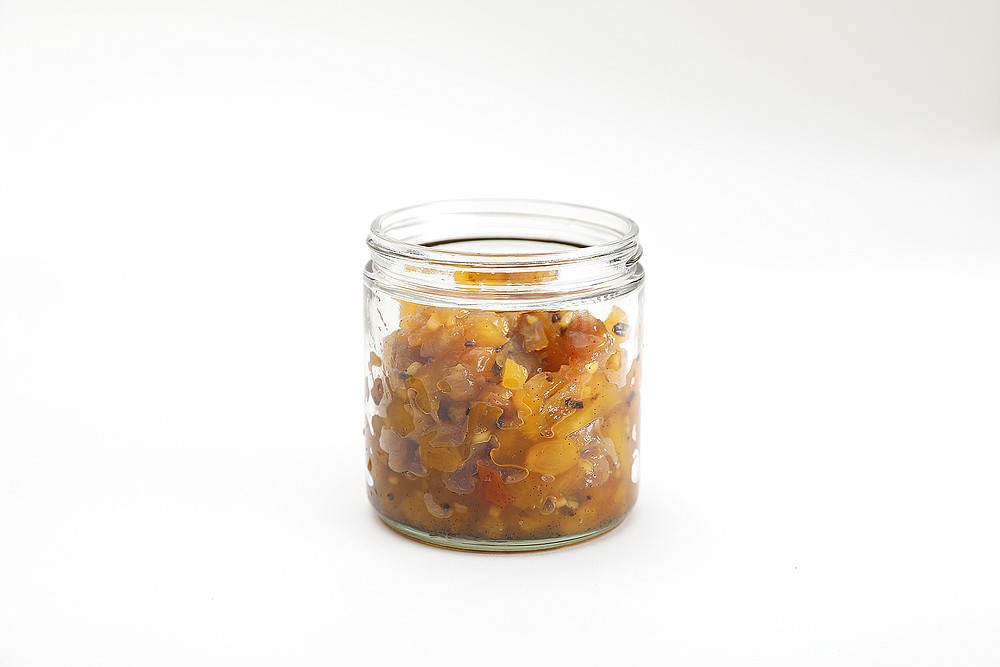 Major Grey's chutney, the Indian-influenced British condiment typically made with mango, serves as the inspiration for this pineapple version, imbued with fragrant vanilla bean and cut through with smoky mezcal. Bright lime, spicy ginger and the mineral sweetness of golden raisins add even more tropical fragrance to the chunky sweet condiment that's best served over smoked meats, grilled turkey or chicken, salmon or grilled lobster and shrimp.

Using a paring knife, split the vanilla bean pod in half lengthwise. Using the tip of the knife, scrape out the seeds and transfer them to a small bowl. Very thinly slice the vanilla pod, then run your knife through it a few times to make sure it's very finely minced. Transfer the chopped pod to the bowl as well.

Bring the mezcal to a boil in a medium saucepan and cook until reduced by half, 1 ½ to 2 minutes. Stir in the vinegar, both sugars, the lime juice and salt, stirring until sugars dissolve, then add the reserved chopped vanilla bean and its seeds, the pineapple, raisins, ginger, onion, garlic and cinnamon.

Place the pan over high heat, cover and bring to a boil. Reduce the heat to maintain a gentle simmer and cook, stirring occasionally, until the mixture is reduced, almost all the liquid is gone and the mixture is glossy and thick, 50 to 55 minutes. 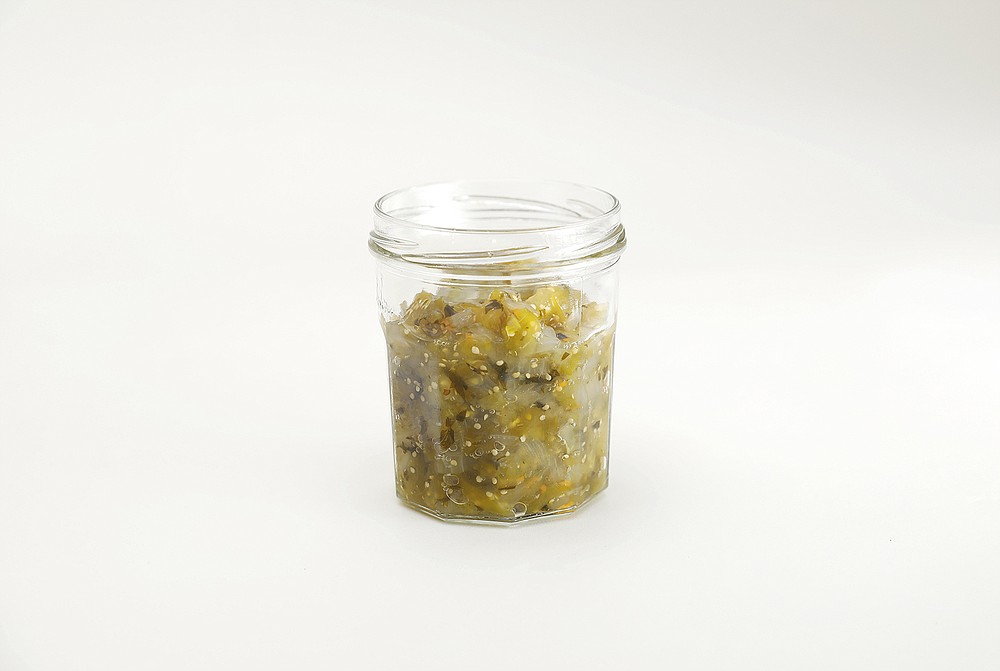 The earthy salinity of tequila adds depth to this sweet, tangy relish, which uses tomatillos instead of the typical green tomatoes, and adds plenty of heat from serrano and habanero chiles. Try to use large tomatillos to make the slicing quicker. This chow-chow is wonderful spooned onto grilled meat, but even better paired with grilled fish, oysters or on sauteed crab cakes.

Remove the husks from the tomatillos, then rinse them under warm running water to remove the sticky film on the outside. Cut each into 8 wedges, then thinly slice the wedges crosswise to create triangles. Transfer the sliced tomatillos to a large bowl.

Add the onion, serrano and habanero. Sprinkle the vegetables with the salt and toss to combine. Cover the bowl with plastic wrap and let sit at room temperature for 4 hours or refrigerate for 8 hours or overnight.

Transfer the vegetables to a large sieve set in the sink and press to extract as much liquid as possible, discarding the liquid.

Bring the tequila to a boil in a medium saucepan and cook until reduced by half, about 1 minute. Stir in the sugar, vinegar and garlic, then stir in the drained vegetables.

Cover the pan and bring the mixture to a boil. Reduce the heat to maintain a gentle simmer and cook, stirring occasionally, until the vegetables are very soft, almost all the liquid is gone and the mixture looks glossy, 40 to 45 minutes.

Print Headline: Getting in the spirits