FILE - In this Oct. 23, 1989, file photo, Seattle Seahawks' Louis Clark (84) brings in a pass as Denver Broncos' Steve Atwater defends during an NFL football game in Seattle. Atwater will be inducted into the Pro Football Hall of Fame with the class of 2020. (AP Photo/Barry Sweet, File)

DENVER -- Steve Atwater was in his second season with the Denver Broncos in 1990 when then-public relations chief Jim Saccomano approached him a few days before their home opener against Kansas City.

"Hey Steve, we want to mic you for the game Monday night," Saccomano announced.

"Against Christian Okoye?" answered an incredulous Atwater. "Why would you want to mic me up for this, of all games?"

Because the super-sized safety nicknamed the "Smiling Assassin" vs. the All-Pro, 260-pound running back known as the "Nigerian Nightmare" was about as good as it gets.

"I definitely was hesitant," Atwater recounted recently as he reflected on a career that has landed him in the Pro Football Hall of Fame. "I wasn't just like, 'Yeah, put it on me. I'm confident I'm going to go out there and make something happen.' "

The folks at NFL Films are forever grateful that Atwater, a former University of Arkansas player from 1985-88, relented and agreed to wear the microphone that night.

When Okoye took a handoff from Steve DeBerg and stepped into the hole, the running back was met by the fierce free safety who moved like a cornerback, hit like a linebacker and -- at 6-3 and 225 pounds -- was built like today's edge rushers.

"We could hear the hit from the sideline," John Elway marveled.

So could everybody at home.

"Yeah, you tried, baby!" Atwater bellowed as he hovered over Okoye.

"He'll be remembered for that hit the rest of his career," a young Broncos offensive assistant named Mike Shanahan offered after Denver's 24-23 victory that night.

"I was just fortunate to come out on the right side of that one," Atwater said all these years later, "because that guy had trucked so many people, and I'm lucky I wasn't one of them."

The seminal stop is being saluted anew as Atwater prepares for his induction into Canton on Saturday with the rest of the Class of 2020, a ceremony that was delayed a year because of the pandemic.

"It couldn't happen to a better guy," Elway said. "He had such a great career and was a guy that changed that position because of his size and his ability to move around."

While intimidation "is no longer as big a part of the game as it used to be," Elway added, "he was an intimidating guy that did a great job."

"I just loved physical football," said Atwater, who was born in Chicago, raised in St. Louis and starred at Arkansas after moving from quarterback to safety as a freshman so he could see the field sooner.

Atwater and Okoye have only spoken briefly about the iconic play that links their careers. A few years ago Okoye asked Atwater to send him a video for a roast in Okoye's honor.

"I was glad he called because we got the chance to chop it up a little bit," Atwater said. "And anybody who's met Christian Okoye knows he's a heck of a guy. And on the football field things happen at different times and, hey, I've gotten run over by different guys, he's gotten hit by other guys, too. So, it's not out of the norm for this to happen.

While that iconic hit on Okoye might symbolize Atwater's spectacular football career, it certainly doesn't define it.

"He had a lot of great moments," Atwater's teammate and mentor Dennis Smith said. "He was an impact player. He had a big impact on wins and losses. Even if it was just his presence. Teams were so afraid of him that they had to game plan ways to just avoid him. He was so big and could move and cover a lot of ground. He just had a lot of skills that a kid his size doesn't usually have."

What elevated Atwater to stardom, Smith said, "was the way he played in Super Bowls."

Atwater, who now works as a fan development manager for the Broncos marketing department, was so instrumental in Denver's first world championship that Shanahan suggested he deserved Super Bowl 32 co-MVP honors with Terrell Davis, who scored three touchdowns that day.

While fellow Hall of Famers Elway, Davis, Shannon Sharpe and Gary Zimmerman were starring on offense in Denver's 31-24 win over the heavily favored Packers, Atwater spearheaded Denver's defense that badgered Brett Favre with six tackles, a strip sack that turned into a tone-setting takeaway and two pass breakups.

"Steve made big plays throughout the game," Shanahan said.

Atwater, who played in Denver from 1989-98, capped his time with the Broncos with a seven-tackle performance in the Broncos' 34-19 win over the Atlanta Falcons in Super Bowl 33.

He played one final season with the Jets, then signed a ceremonial one-day contract in Denver to retire a Bronco. 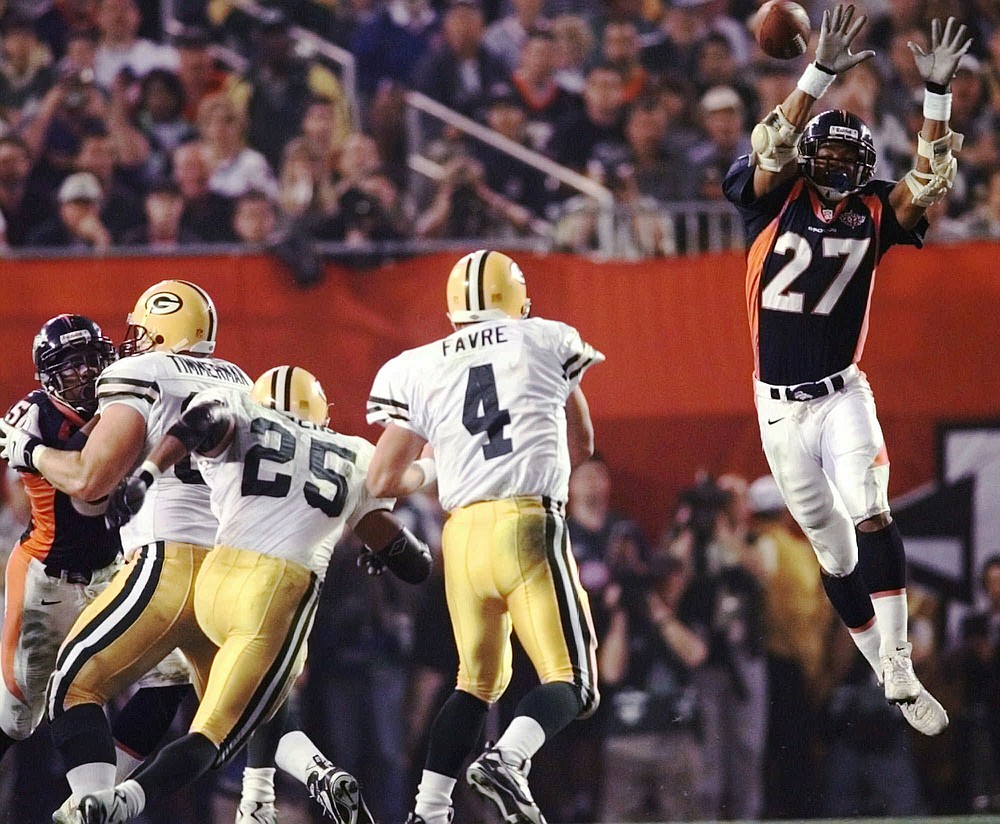 FILE - In this Jan. 25, 1998, file photo, Denver Broncos safety Steve Atwater (27) jumps into the air in an attempt to block a pass by Green Bay Packers quarterback Brett Favre during the third quarter of NFL football's Super Bowl 32 at San Diego's Qualcomm Stadium. At left are Packers' Dorsey Levens (25) and Adam Timmerman (63). Atwater is part of the 2020 class to be inducted into the Pro Football Hall of Fame. (AP Photo/John Gaps III, File) 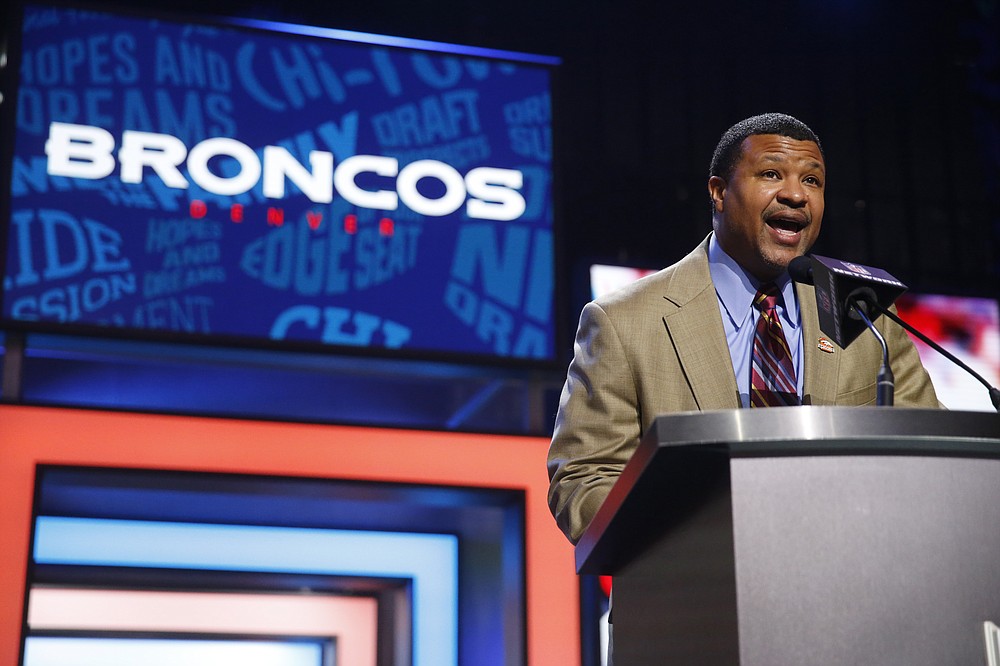 FILE - Former NFL player Steve Atwater announces that the Denver Broncos select Georgia Tech's Adam Gotsis as the 63rd pick in the second round of the 2016 NFL football draft in Chicago, in this Friday, April 29, 2016, file photo. Chances are slim the Broncos would have dethroned the defending champion Green Bay Packers in Super Bowl XXXII were it not for the outstanding play of free safety Steve Atwater. (AP Photo/Charles Rex Arbogast, File)