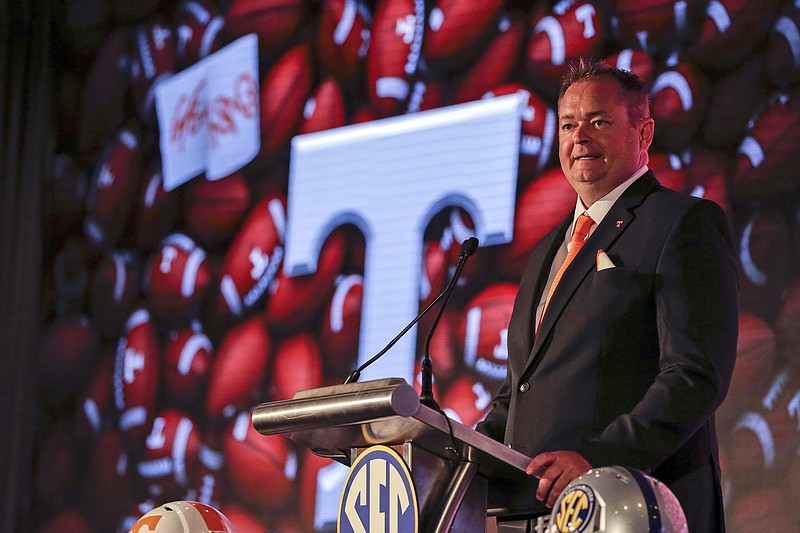 HOOVER, Ala. -- The "Power T" brand touted by Tennessee football has been on a power nap most of the last 13 years.

Since tying for the SEC East crown with Georgia in 2007, the Volunteers have churned through five permanent head coaches and two interim ones, suffered through a public spectacle in their widely ridiculed 2017 coaching search, and finished no closer than two games behind the division winner.

Tennessee's high water marks in that span were back-to-back 9-4 records and ties for second place in the East in 2015 and 2016 under current Arkansas State University Coach Butch Jones.

The Vols also suffered through last-place finishes in 2017 and 2018, including an 0-8 SEC run in Jones' final season, touching off Tennessee's frantic, 26-day coaching search.

Phillip Fulmer, the Vols' BCS national championship-winning coach in 1998, coached his last game in 2008, took over as athletic director during the search fiasco in 2017 and tabbed Jeremy Pruitt, whose 16-19 run ended last winter with his firing for cause due to NCAA infractions.

Fulmer's replacement as athletic director, Danny White from Central Florida, turned it into a package deal when he hired Josh Heupel away from the Golden Knights to restore some gusto to Tennessee's fading image.

Yes, it has been a soap opera on Rocky Top.

"This is one of the great and iconic logos in all of college football, steeped in tradition," Heupel said at SEC Media Days. "It's a great honor to be the caretaker of Tennessee football at this time and really proud of what our players and our staff have done in six months."

The Volunteers went 3-7 last year after a 2-0 start, then accepted a bid to the Liberty Bowl, which Fulmer called a "primer" for spring practice.

However, covid-19 issues at Tennessee caused the Vols to back out of the bowl and within a month, Pruitt and Fulmer were out of jobs.

The transfer portal then hammered the program with a large array of standouts, including star tailback Eric Gray (to Oklahoma) and linebacker Henry To'o To'o (to Alabama) exiting the roster.

The Volunteers had beaten the Crimson Tide 10 of the last 12 meetings prior to Coach Nick Saban's arrival in 2007. In 14 games since then, Alabama has won them all, outscoring the Vols 537-177 in the process.

Heupel hopes his fast-paced offense will catch fire in the SEC.

His Central Florida teams finished in the top eight in FBS scoring in each of his three seasons. The year before that at Missouri with Drew Lock under center, the Tigers led the SEC with 37.5 points per game.

"As an entire football program, we want to play fast and be physical, but when I say the word fast, I'm talking about in the way that we play, not just from play to play, but how we play the play.

"To do that, you've got to be able to put your kids in a position to understand what they're doing, to unlock their natural opportunities of who they are, their physical capabilities, and let them go play."

Receiver Velus Jones Jr. said he and his family did research into Heupel's system, liked it, and is even more hyped following spring drills.

"I'm so excited with my ability to catch the ball, to get yards after the catch and be a deep-ball threat," Jones said at media days. "It's just like it's a dream come true playing in this offense, especially speaking for my receiver corps and also my tight ends. Like we're really excited about this offense."

Starting quarterbacks in Heupel's system the last four years -- Lock, then McKenzie Milton and Dillon Gabriel at UCF -- have thrown 130 touchdown passes against 30 interceptions, averaged 3,463 passing yards per year and completed 59% of their passes.

Settling on a starting quarterback this fall is expected to last well into training camp.

Sophomore Harrison Bailey, the No. 3 ranked pro-style quarterback in the 2020 class by 247Sports, is the top returner at the position, but he'll be challenged by a pair of transfers in Hendon Hooker, formerly of Virginia Tech, and ex-Michigan Wolverine Joe Milton.

"Competition is the greatest friend that any coach has," Heupel said when asked about Milton's spot in the quarterback derby. "You have to have it in that room. It's going to drive the players inside of it when you're not around it.

"To me, Joe's got a unique skill set, a strong arm, accurate passer. I think he's a very bright young man that's picked up on what we've done so far really well. He's talented. He can spread the football field from sideline to sideline and vertically and has a unique skill set with his size and mobility to use his feet as a weapon."

The Vols bring back just two offensive starters in tackles Cade Mays and Darnell Wright to pair with the new quarterback starter.

Five starters return on the other side of the ball, including defensive backs Trevon Flowers, Jaylen McCollough and Alontae Taylor.

SEC media projected the Volunteers to finish fifth in the SEC East in what looks like a rebuilding year in Heupel's debut.

Tennessee's veterans know the expectations are low but they want to make an impact now.

"It's a special place to come play college football, and everything and anything that you want to do in the game and outside of the game has been done at Tennessee and will be done again," he said.

Tennessee at a glance

The Volunteers are seemingly starting over, at a point well behind division kingpins Georgia and Florida, after being hammered in the transfer portal. There is hope Heupel’s offense can start to kick in this season after the Vols identify a quarterback, but finishing in the top part of the division is a big ask.