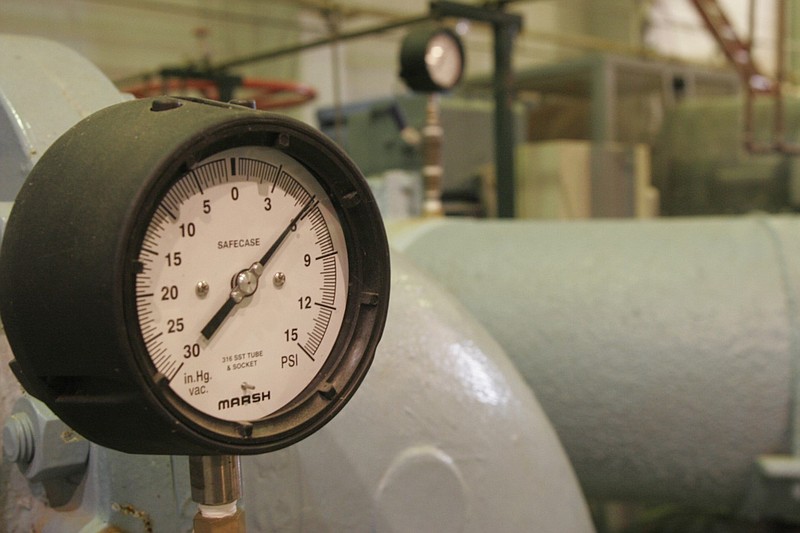 Gauges in high service pumps measure the suction and discharge levels of water to each of the distribution centers throughout Little Rock and North Little Rock in this August 2007 file photo. (Arkansas Democrat-Gazette file photo)

Central Arkansas Water has sent a letter to Pulaski County Quorum Court members and Pulaski County's chief executive suggesting they use a portion of American Rescue Plan funds for the expansion of water service to an area out west.

The West Pulaski Water Expansion Project seeks to provide water coverage in west Pulaski County to more than 1,000 residents and businesses that are on private wells. The expansion project has stalled because many residents are reluctant to commit to a $125 per month surcharge, said Doug Shackelford, director of public affairs and communications for Central Arkansas Water.

"This a substantial surcharge," Shackelford said. "We recognize that, and, of course, the residents out there recognize that as well. But there is still a group right now of about 300 that are very interested or have signed up with us to bring water out there."

The letter asks county government officials to consider giving a $6 million to $8 million allotment to Central Arkansas Water from the federal government's American Rescue Plan, saying it would lower the cost to residents to as low as $40 per month.

"We're hoping to hear something positive from this project," Shackelford said. "It's our goal to begin construction out there in 2022 and then it will be some time before we get the water out there."

The $18 million project did not just spring out of nowhere. Residents have been pushing for access to public water for some time, Shackelford said.

"The area out near Ferndale doesn't have any public water system," Shackelford said. "Most of the residents out there are on wells, but there has been a movement coming up on 20 years now to try to bring public water to that area."

Shackelford said the low- to moderate-income residents in the area would not be able to afford the $125 monthly surcharge.

"The $125 is out of reach to be able to pay that amount monthly, but they don't have access to really good water," Shackelford said. "In some cases, the wells are not good. The water coming out of the ground is poor quality."

The Central Arkansas Water letter to Pulaski County officials speculates that the project, when complete, would improve community health near Ferndale, citing a study that tested wells in the area for contamination.

Additionally, the letter suggests a partnership of some kind may be able to bring more than just water to the area.

"We have looked at partnering with other utilities, and, while we have trenches open to put pipe in the ground, can we put in fiber [internet]?" Shackelford said. "Can we put in natural gas lines? What can be done to lower construction costs?"

The goal for Central Arkansas Water, Shackelford said, is to get 600 out of the 1,000 area residents -- or about double they have interested now -- to sign on to a surcharge.

"The more residents we have out there that agree to come on board, the less the surcharge will be," Shackelford said. "We're doing our estimates around 600 folks."

The area the letter specifies is along Kanis Road, centering at the intersection with Ferndale Cutoff Road in the 1st District of the Quorum Court.

Doug Reed, the 1st District representative on the Quorum Court, which is the elected governing body for Pulaski County, said he thinks positively of the suggestion sent to him and the other members of the board.

"I did talk to people about that, and I think I'm for it -- until I find something to be against it," Reed said.

Hyde said in an interview Friday that giving Central Arkansas Water that funding would be moving toward that direction.

"At this time, that's something we're not going to jump at to subsidize CAW," Hyde said. "We want to be careful with that, and really with our rescue funds, we want to be cautious taking on responsibilities we can't sustain."

Hyde said Central Arkansas Water could look for funding from the state for the project.

"They have several other options to them," Hyde said. "The biggest one and the last thing I told them, and I don't know if they're pursuing it or not, is that's a valid project for them to apply to the state committee on rescue funds."

During the Quorum Court's Agenda Committee meeting on July 13, Justice of the Peace Kristina "KG" Gulley asked her fellow JPs about the letter that was sent to them from Central Arkansas Water about the West Pulaski Water Expansion Project.

When asked on Saturday what she thought about the proposal, Gulley said she thought it was unfair to give money toward new projects while residents in her district were still paying Central Arkansas Water for previous projects. Gulley represents the 10th District in North Little Rock.

"My concern is that Central Arkansas Water wants to do this expansion out west of Little Rock and they're asking for a lot of money," Gulley said. "As of right now, my position is if Central Arkansas Water is wanting me to support that on the Quorum Court, they're going to have to erase the debt tax that's going on my constituent's water bill every month."