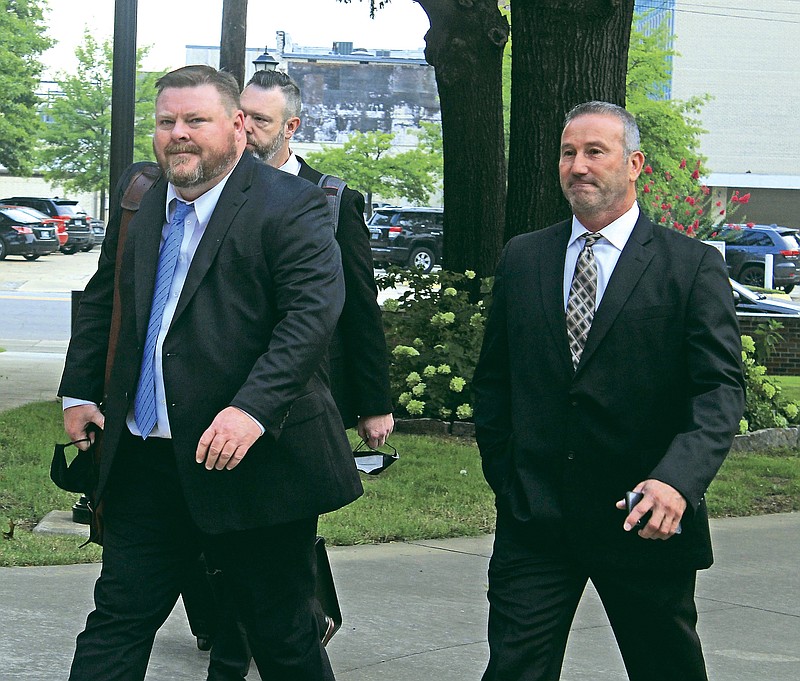 Franklin County Sheriff Anthony Boen (right) walks into the federal courthouse for the Western District of Arkansas on Monday with his attorneys, Russell Wood (left) and Paul Prater (center), in Fort Smith. Boen is on trial for three charges of deprivation of rights under color of law in connection with three use of force incidents involving detainees. (NWA Democrat-Gazette/Max Bryan)

FORT SMITH -- The jury selection process is underway for a criminal case in which a River Valley sheriff stands accused of using unreasonable force against detainees three separate times.

The jury trial for Franklin County Sheriff Anthony Boen, 51, began at about 9 a.m. Monday in Fort Smith before U.S. District Judge Timothy L. Brooks. Boen pleaded not guilty to three federal charges of deprivation of rights under color of law on Dec. 17, 2019. He has held the position of sheriff since 2011.

Boen's trial was originally set for Feb. 3, 2020. However, it was postponed four times. A moratorium on jury trials in the federal courts stemming from the covid-19 pandemic was in place from March 2020 through May 17, 2021.

Franklin County Sheriff Anthony Boen faces a maximum sentence of 30 years in prison, three years of supervised release and a fine of up to $250,000 if convicted of his three federal charges.

Source: U.S. attorney for the Western District of Arkansas