Get ready because OU, Texas on their way 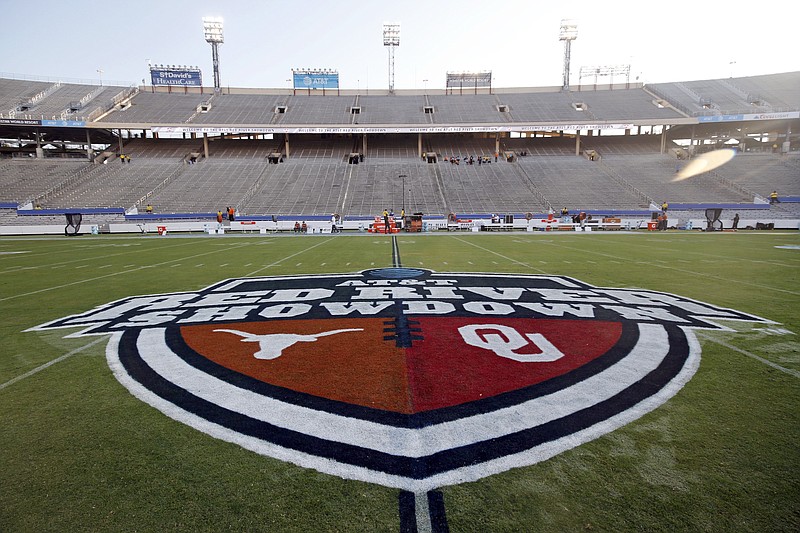 The Red River Showdown logo is displayed on the field of the Cotton Bowl, prior to a Oct. 10, 2020, matchup between University of Texas and Oklahoma in Dallas. - Photo by Michael Ainsworth of The Associated Press

While lawyers argue over when Texas and Oklahoma can officially leave the Big 12 Conference and join the SEC, we can begin right now to prepare for the move.

The first order of business is to melt down the Battle Line trophy from that contrived rivalry with Missouri and reuse it for more important items like butter knives and doorknobs.

Texas is Arkansas' No. 1 rival.

Not Missouri. Not Ole Miss. Not LSU.

It's Texas. Always has been, and we don't need a trophy to prove it.

Secondly, folks on the western side of the state who drive around with those "House Divided" Hogs/OU license plates need to make a decision on where their loyalty lies before Oklahoma joins the league. Can't do both.

Adding Texas and Oklahoma to the SEC is a big deal and sports fans in Arkansas, especially the younger ones, should know what to expect when they move into the neighborhood.

Texas fans are loud and obnoxious -- the type who'd show up to a dance recital decked out in a cowboy hat and a long, black duster coat just to make a grand entrance. Texas remains arrogant despite the fact they've been getting their butts beat on a regular basis the last 20 years.

Arkansas is no better than third on their list of rivals behind Oklahoma and Texas A&M. Texas holds a 56-22-0 series lead over Arkansas, and the Longhorns have won games where it appeared surely they were about to lose.

I saw it in 1977 when Earl Campbell took a swing pass and went 28 yards to set up a late touchdown that beat Arkansas 13-9. It was the only loss of the year for Lou Holtz and the Razorbacks, who finished 11-1 and ranked No. 3 in the country.

I saw it in 2004 when Arkansas appeared on the verge of an upset of the No. 7 ranked Longhorns. But Matt Jones was stripped from behind while fighting for extra yardage and Texas recovered at the 8 to preserve a 22-20 victory.

I saw it in 1969 as a little boy sitting too close to the TV when No. 1 Texas rallied from a 14-0 deficit to defeat No. 2 Arkansas 15-14. Heartache, for sure. While then-president Richard Nixon joined the Longhorns in their locker room, I left a full room at our house to go outside and cry alone. I was met there by my brother, who was already in tears.

Losing that so-called "Game of the Century" remains the ultimate heartbreak in the history of Arkansas sports to the players involved and to the fans who watched it.

Now for Oklahoma, which holds a 10-4-1 series lead over the Razorbacks.

Arkansas compiled a 22-game winning streak from 1963 to 1965. That's pretty good, except when you compare it to Oklahoma, which has compiled winning streaks of 28, 31, and 47 games, still the longest in the history of college football.

I remember the betting line changing substantially in 1977 after Lou Holtz suspended four starters for violating team rules before facing No. 2 Oklahoma in the Orange Bowl. It was a principled move by Holtz, one I'm sure many coaches wouldn't make today. Holtz rallied the team and backup running back Roland Sales rushed for 205 yards as the Razorbacks stunned the Sooners, 31-6.

The 1977 football season is arguably second-best at Arkansas behind the 1964 team that went 11-0 and was declared national champions by the Football Writers Association of America after beating Nebraska in the Cotton Bowl.

Do you remember the statistics for Arkansas at the Cotton Bowl in 2002, when Oklahoma beat the Hogs 10-3? I do.

Arkansas was so bad offensively that may have been the reason bowl officials decided to removed the word "Classic" from Cotton Bowl Classic. OK, maybe not.

I've revealed nothing here that Arkansas fans 50 years and older don't already know about Texas and Oklahoma. You've done your part in standing up to the aggressors, celebrating the victories and suffering in the painful defeats.

So, it's up to new generations of Arkansas fans to pick up the slack for the old-timers and match the passion of the conference newcomers when they come strutting into our neighborhood. Pump up the pep rallies. Call into radio shows, watch previews on TV and visit our newspaper website for the best Razorbacks coverage in the state.

Most importantly, go to the games and be loud.

The Razorbacks will need your youthful enthusiasm in what will become an even bigger and bolder SEC.

Print Headline: Get ready: OU, Texas on their way