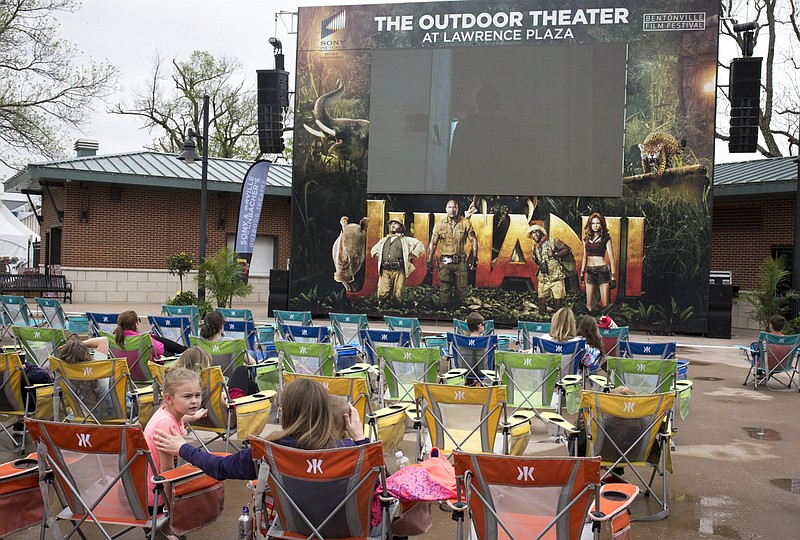 NWA Democrat-Gazette/CHARLIE KAIJO Attendees watch an outdoor screening of Jumanji, Monday, May 4, 2018 at the Bentonville Square in Bentonville. Food and shopping vendors set up tables at the Square for the Bentonville Film Festival.

If there was one silver lining from the Bentonville Film Festival's forced switch to a virtual format in 2020, it might be the lesson in inclusivity festival organizers learned.

The digital platform allowed increased capacity for events that always sell out, as well as for more than 30,000 virtual participants from around the world to attend the festival.

"We probably will always have watch.bentonville.com, which is our virtual platform," confirms Ashley Edwards, BFF director of programming.

While the festival has always been mission-oriented in its pursuit of making space for female and underrepresented voices in media, pivoting to a digital sphere underscored the issue of physical access that can often be part of a festival's reality.

"Some people can't travel. Definitely not everybody can ever travel to Sundance. I don't know if you'd be able to get a hotel room, you know?" Edwards demonstrates. "So this sort of elitist way of going to a film festival -- people struggling to have access to even get in to see a film -- should never be the case."

And so as Bentonville prepares to roll out the "blue" carpet for the festival's seventh annual event, organizers hope BFF's hybrid model of in-person and virtual opportunities will continue that level of access so many enjoyed last year.

"I have found it very interesting that we are a globally and nationally recognized film festival; you hear it time and time again," Edwards shares. "I was talking to a Variety reporter this morning, and she's like, 'Your festival's at the top of our list,' right? But then I'm from Bentonville, I go down the street and hear, 'What's the Bentonville Film Festival?' And it just floors me."

So, as the festival gets its feet back under it, that's Edwards' next goal: to help the region fully understand the festival's impact.

"Why do we have a film festival? What are film festivals for? How do you go to a film festival?" she says, noting the outreach pieces that need some work. Edwards wants Arkansas audiences to understand that all are welcome to come and take part, and that "independent cinema" doesn't mean boring.

It's "indie cinema" -- and the work of organizations like the newly formed nonprofit Bentonville Film Foundation -- that make it possible to bring showings and events outside the mainstream to Northwest Arkansas.

By way of example, Edwards points to the screenings earlier this year of the Oscar-nominated film "Minari" that took place around the region. Despite the fact that the film follows a family of Korean immigrants on their move to Arkansas, Edwards speculates that the lauded film might not have otherwise been shown at big name movie theaters in the region.

"That, and then also understanding the impact of how we as a festival in Arkansas are changing the landscape of Hollywood in a way that Hollywood sees representation in film," she goes on. "That's amazing. What [festival co-founder] Geena [Davis] did here is amazing."

And it's a ripple effect, Edwards adds, pointing to the growing film industry in the Natural State. Growing up in Arkansas, she never saw an opportunity to be part of the industry unless she left the state. Now, the infrastructure has grown such that there are myriad ways to make a living in different areas of the filmmaking process, Edwards asserts.

"That kind of stuff, I think we still need that regional education. I'm not saying we're bringing it all, but we definitely want to help foster that."

One way festival organizers are supporting that goal is with the Regional Shorts Showcase, initiated last year. A compilation of non-competition short films that were filmed regionally or created by filmmakers and/or actors from the region are highlighted in their own category during the festival.

"We want to be able to support stories, and support filmmaking, here and make sure that those stories have a place in our festival," Edwards affirms.

In the vein of making space for underrepresented voices, the seventh annual BFF will also have an LGBTQIA+ Shorts Showcase. Viewers will, of course, still find queer stories represented in the competition films, but the festival received so many incredible submissions that they couldn't all fit in the lineup. So the programming team wanted to offer a platform to highlight just a few more of the "beautiful stories" they received, Edwards reveals.

"As we grow as a festival, we are trying to really understand who's not being represented. And, truly, I've watched films for this festival since the beginning, and the LGBTQ stories are the ones that I see that are really changing, and really changing how we see that," she shares. Edwards also saw the same trend in film submissions featuring Asian and Pacific Island stories, she adds.

"I think it's just the more that we are doing our own mission in the industry -- where we are asking filmmakers to look at their crew: Who's behind the camera? Who's telling the stories? And then who's in front of the camera? -- I'm just seeing how it's changing the industry landscape."

The Northwest Arkansas landscape also seems to be responding to the festival's mission of inclusion, Edwards notes. Among previous partnerships and "unofficial" community events planned around the festival, she specifically points to the yearly exhibition organized by University of Arkansas faculty and students to complement the festival's theme. The exhibition is hosted for free at 21c Museum Hotel during BFF's run.

"It's pretty great for our filmmakers to see and great for the community," Edwards enthuses. "I hope more people do that in the future, that they partner with us in a way, kind of like Sundance. If you go to Sundance, you see all these different people of Park City kind of activating around [the festival], and in response to it. And it's not all led by our programming, but it's definitely kind of in celebration of the festival. I think more and more, that hopefully will grow." 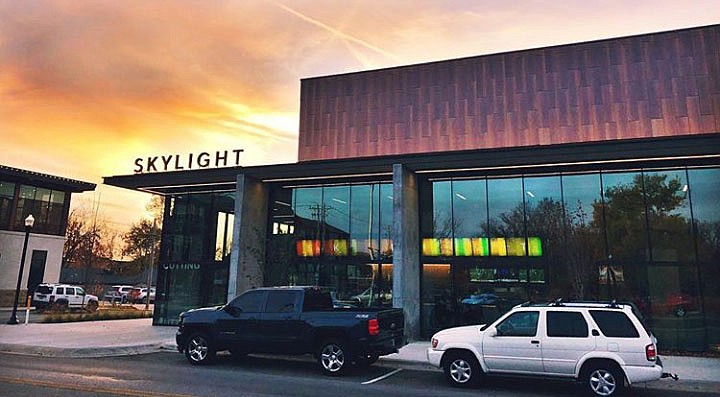 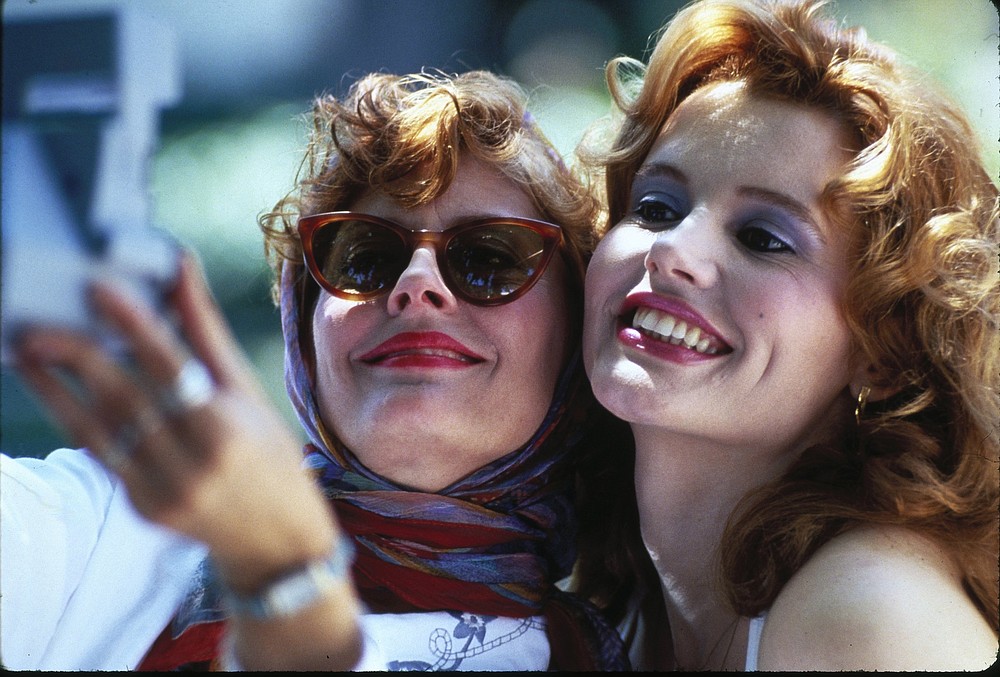 On the Cover: “Thelma & Louise,” starring BFF founder Geena Davis (right) and Susan Sarandon, celebrates its 30th anniversary at this year’s festival with a drive-in screening at 8 p.m. Aug. 3 at the 112 Drive-In in Fayetteville. A live-streamed conversation with Davis and screenwriter Callie Khouri will follow. Tickets are $30 per car at bentonvillefilm.org/tickets-passes. (File Photo)
More News