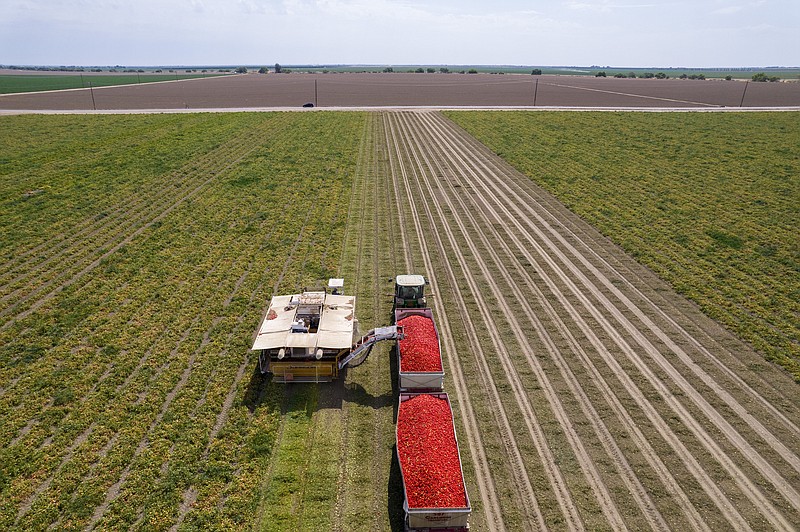 Tomatoes are harvested in San Joaquin Valley, Calif., by Ingomar Packing Company. MUST CREDIT: Photo by John Brecher for The Washington Post.

Tomato sauce is feeling the squeeze, and ketchup can't catch up.

California grows more than 90% of Americans' canned tomatoes and a third of the world's. Ongoing drought in the state has hurt the planting and harvesting of many summer crops, but water-hungry "processing tomatoes" are caught up in a particularly treacherous swirl of problems that experts say will spur prices to surge far more than they already have.

The drought threatens to imperil some of Americans' favorite ingredients. Pizza sauce, marinara, tomato paste, stewed tomatoes and ketchup all hang in the balance. And this comes not long after completely unrelated shortage of pizza sauce and individual ketchup packets during the height of the food-delivery-crazed pandemic.

This also comes on top of already steep increases in the price of fruits and vegetables, which have been rising since the coronavirus pandemic was declared last year.

"If you're a producer or a canner and see these problems coming, why would you not raise prices now in anticipation?" he said, adding that consumers don't see the price tag for a lot of the processed tomatoes consumed away from home. "It's embedded in the menu board -- but it is one more reason prices at Chipotle and Pizza Hut will go up."

In a normal year, Aaron Barcellos, a farmer in Firebaugh, Calif., grows 2,200 acres of processing tomatoes. This year he's decided to drop to 900 acres on his farm, which is on the border of Merced and Fresno counties. He's left the remaining acres unplanted, choosing to focus all of his precious water on almonds, pistachios and olives grown on trellises -- crops that command higher prices and represent already-significant sunken costs.

"We get 8 inches of rain in a normal year. Last year we got 4½ inches," he said. "We got zero percent of our water allocation, which forced us to buy a lot of expensive water, and it doesn't make sense to put it on tomatoes."

He said many growers have made the decision to use their limited water on permanent crops -- trees and things like grape vines -- choosing to forgo planting annuals like tomatoes, onions and garlic, or even letting crops already planted wither in the desertlike conditions.

This year's shortage of processing tomatoes has been a long time in the making. Farmers already had been planting fewer tomatoes. From 2015-19, fewer countries were importing American tomatoes, partly because the dollar was strong, which made U.S. canned tomato products more expensive. This created an oversupply of California tomatoes, said Rob Neenan, chief executive of the California League of Food Producers.

Processors cut back their orders, and farmers planted fewer acres. At the same time, partly because of a trade war, a global shortage of steel sheets used to make cans for food production caused can prices to soar. Major processing plants in Williams, Lemoore and Stockton, Calif., closed, citing higher production expenses, leaving fewer places for growers to sell. Inventory at the beginning of 2020 was low, and supplies had tightened up worldwide.

And then the pandemic hit. Cue the tomato hoarding.

Early in the pandemic, gallon cans of tomatoes sat unwanted on restaurant distributor shelves, hurting those who sold to the restaurant industry and other food-service sectors -- this included caterers, event arenas and corporate cafeterias that all closed in the spring of 2020. Meanwhile, retail sales at grocery stores -- from 5-ounce cans of paste to 28-ounce cans of diced -- soared.

"If you were just selling to food service, they didn't want all those tomatoes last year when restaurants closed. But if you were in retail, you were in hog heaven," he said, going on to describe the uptick in pandemic pizza delivery, which used up all of those gallon cans, followed by a ketchup shortage when curbside pickups and food delivery services grabbed all of the little packets.

On top of the chaos of the supply problem, there's still the threat of the coronavirus. Thousands of farmworkers throughout California have gotten sick on the job. Outbreaks still occur, despite robust vaccination pushes.

Muller said there were few infections among his farmworkers because his tomatoes are mechanically picked, but he's worried about worker shortages.

"We made it through last year, but here we are, and the workforce is still not returning because of enhanced unemployment benefits, and that has affected seasonal processing plants," Muller said.

All these problems are leading to fewer tomatoes. Processors reined in their estimate of how many tons of tomatoes they would contract for this year, dropping it by more than a million tons, and now even that looks overly hopeful. Muller said this is the first year processors didn't get all the tomato tonnage they wanted from farmers. "This year will be some of the lowest inventory levels that we've ever seen," he said.

Prices were already on the rise. In April, processing tomatoes worldwide was 7% more expensive than during three previous seasons, according to the World Processing Tomato Council. And before this summer's heat wave struck, the California Tomato Growers Association had negotiated a price on behalf of farmers with the tomato processors that is 5.6% higher than last growing season, because, as Muller says, farmers' expenses are rising. "Supplies, fuel, drip tape, anything with steel, you name it, it's going up."

"Tomato processors have very expensive facilities that can only do one thing. If they don't want to be out of business, they will have to bid up tomatoes rather than leave facilities idle," said Swanson, the agricultural economist.

Those price increases are expected to be passed along to the big companies that contract with processors, agricultural experts say. Companies that have deep ties to tomatoes have yet to signal price increases. Kraft Heinz declined to comment about pricing for this article, as did Campbell Soup, which is a grower as well as a processor and uses about 2 billion pounds of tomatoes annually for its iconic soup, V8 beverages, and Prego and Pace sauces.

But a lot of these business decisions were made before the recent blistering, record heat wave. Fresno County, the top producer of tomatoes, saw a long stretch of triple-digit temperatures. Yolo, Kings, Merced and San Joaquin are the next largest in terms of tomato production, and all five are in the "exceptional drought" category, the highest level on the U.S. drought map. Severe drought conditions have enveloped nearly all of California's landmass, with the state's rain and snowfall well below average and its network of reservoirs holding much less water than usual.

Muller said in a typical year he has allocated 3 or 4 feet of water for every acre of farmland that needs irrigation. This year he got a smidgen of 1 foot, just 3.6 inches of water per acre. Much less rain than usual, as well as much less irrigation water than usual means growers must turn to groundwater, which is more expensive, to save their crops.

"In Yolo County, we have relatively stable groundwater and replenishment of the aquifer. It's like having money in the bank, so we're pumping water out of the ground like a withdrawal," he said. "We're just keeping our fingers crossed that the water table will maintain itself. That's caused a whole new level of concern."

Greg Pruett, chief executive of Ingomar Packing Co. in Los Banos, a partnership of four growers, says the situation is going to be significantly worse next year because while there were reasonable reservoir levels going into this growing season, that will be entirely depleted by growers turning to groundwater.

Last month, California's State Water Resources Control Board released an order that would cut farmers off from turning to rivers and streams in the Sacramento and San Joaquin river watersheds, removing yet another source of water in an extreme drought year.

"Growers will have the worst water situation ever by the end of this growing season," Pruett said. "The cost increases this year -- in water, cans, all the other ingredients, labor, transportation -- all those things add up to major cost inflation. And that pales in comparison to what's going to happen next year."

Bottom line, he says: If the drought continues and the water table dips significantly, many growers may not plant tomatoes next year. 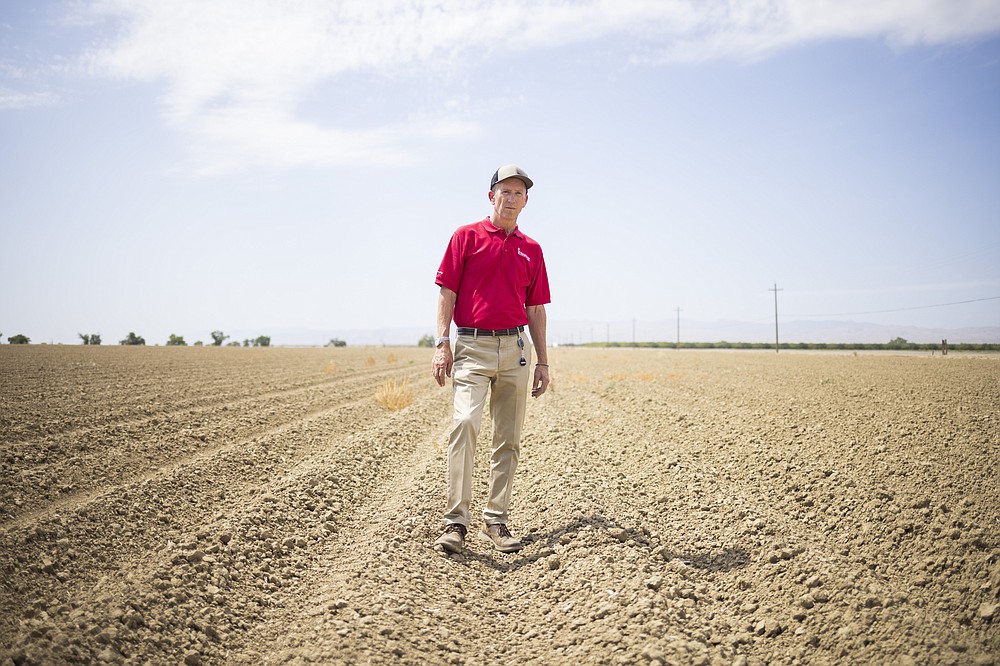 Greg Pruett, the chief executive of Ingomar Packing Company, stands in a fallow field. MUST CREDIT: Photo by John Brecher for The Washington Post. 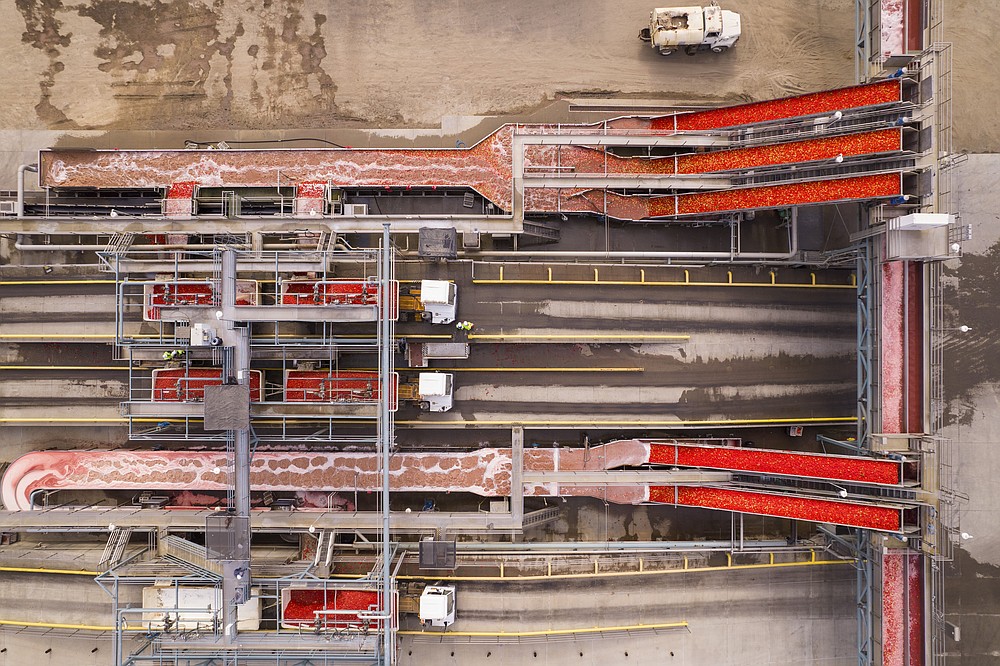 Tomatoes harvested in San Joaquin Valley are processed in Los Banos, Calif. MUST CREDIT: Photo by John Brecher for The Washington Post. 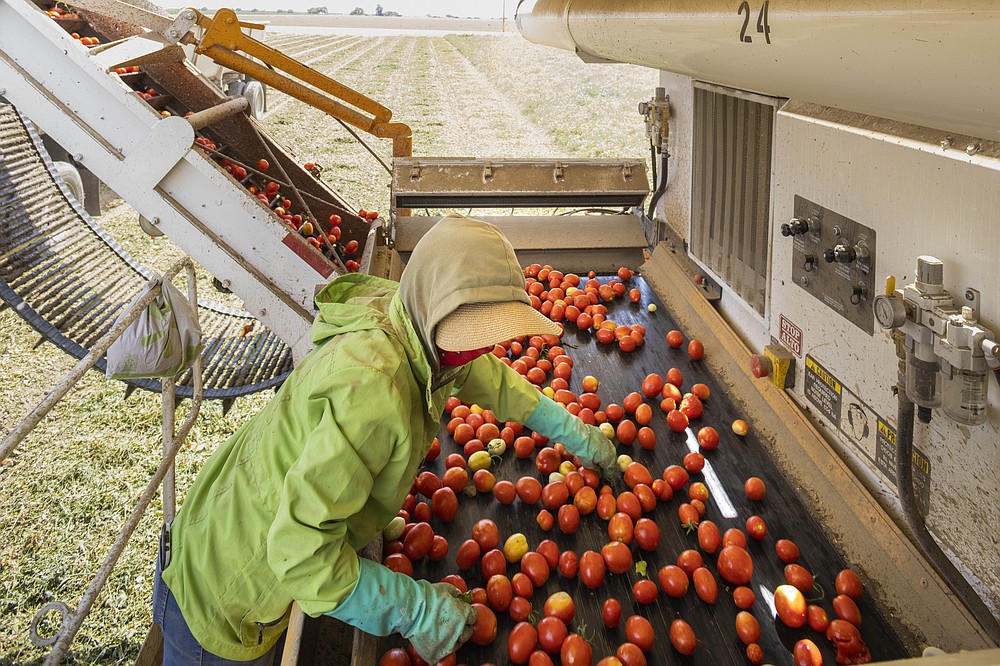 A worker harvests tomatoes in San Joaquin Valley. MUST CREDIT: Photo by John Brecher for The Washington Post. 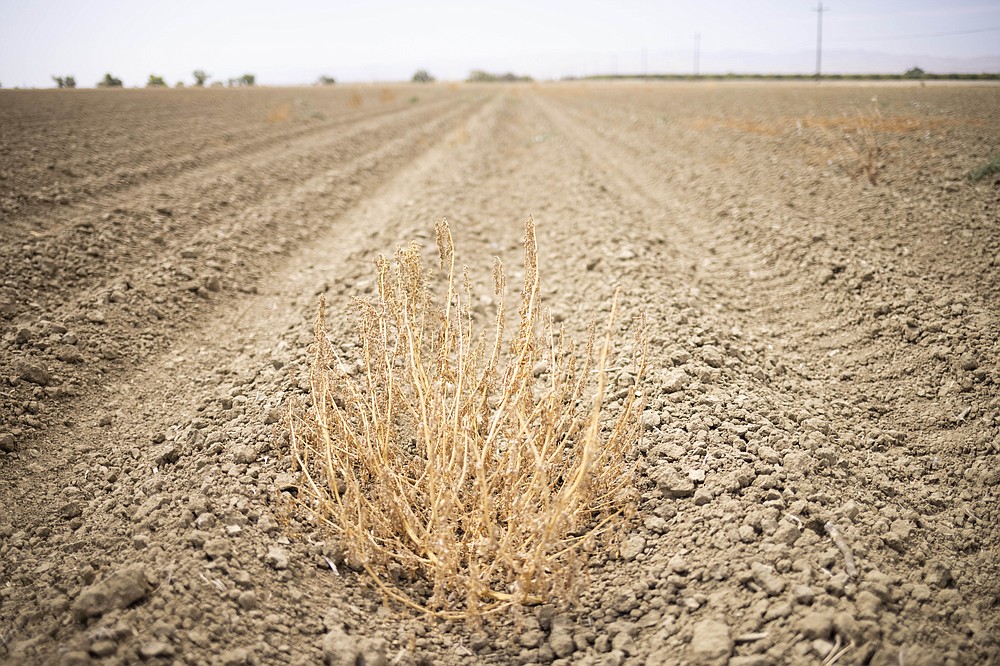 A dried weed in a fallow field in Los Banos, Calif. MUST CREDIT: Photo by John Brecher for The Washington Post.