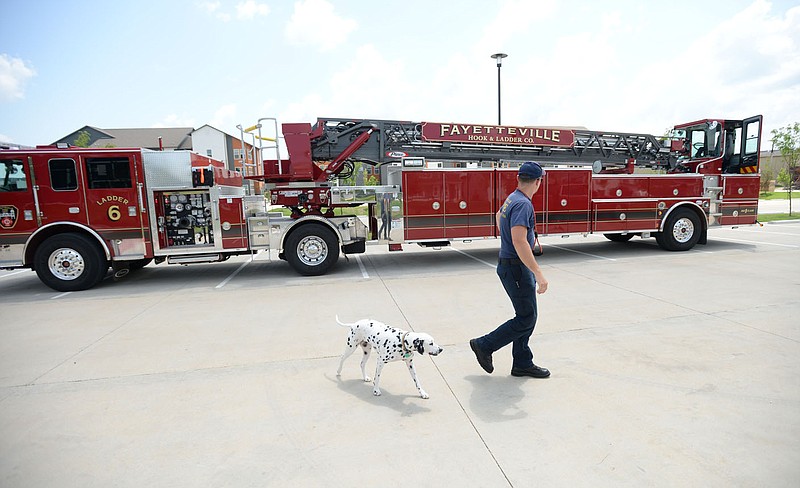 Martin Striefler, a firefighter with the Fayetteville Fire Department, and his dog, Ember, walk Tuesday, July 27, 2021, around Ladder 6 while training on the department's new tiller truck off Hollywood Avenue. The department bought its first tiller truck for $1.4 million using money from its share of city sales tax revenue. Early voting starts Tuesday, and Election Day is Aug. 10, to continue the 1-cent tax for operations and some capital expenditures. Visit nwaonline.com/210728Daily/ for today's photo gallery. (NWA Democrat-Gazette/Andy Shupe)

FAYETTEVILLE -- The time when the city could operate without sales tax revenue is long gone, administrators say.

Officials are asking voters to continue the city's 1-cent sales tax for operations and some capital expenditures. Early voting for the Aug. 10 election begins Tuesday.

Sixty percent of the revenue from the tax on goods goes to general operations, mostly personnel. The remaining 40% goes to capital improvements.

The tax generates about $22.5 million in revenue annually, according to Paul Becker, the city's chief financial officer. That equates to about $13.5 million for operations and $9 million for capital expenditures.

Voters have continued the tax twice in special elections held in 2011 and 2002. The City Council enacted the tax in 1993. The tax passed with a significant majority in each election.

The levy is set to expire in two years. Continuation of the tax would extend it until 2033.

No groups in opposition have filed with the Arkansas Ethics Commission.

The city would need to cut more than 130 positions if the tax fails, Becker said. Services to the public would take a hit as a result. Basic programs such as street overlay, new sidewalks and trails, and equipment and technology upgrades and replacements would end, he said. The reduced revenue would begin in 2023 if the tax extension fails, he said.

The city receives a portion of Washington County sales tax revenue and property taxes, Becker said. However, the amounts aren't enough to maintain the current level of services for residents, he said.

Trying to cut the budget more than $20 million in revenue would take a deep analysis, Becker said.

"There's no way to not cut people," he said.

There's an example on the city website of what would happen if cuts were made evenly across departments. Becker said the numbers likely would differ if the vote fails, but the example shows the scale of the impact. The City Council would make the final decision on budget cuts.

The example says if the city cut the budget by 27% -- the percentage of revenue the tax brings to the general fund -- across all operational categories, personnel expenditures would be reduced by about $11 million.

There are nearly 500 full-time equivalent positions paid for under the city's general fund, and a 27% cut would result in about 150 city employees losing jobs, according to Becker.

If applied equally in each department, about 48 of 176 police employees and 33 of 122 employees in the Fire Department would be let go. Seven full-time equivalent positions would need to be eliminated from the Parks Department.

Also in Becker's example, the city's contracts with organizations such as the Boys & Girls Club, 7 Hills Homeless Center, Area Agency on Aging for the senior center, public access television and the Arkansas Air & Military Museum would be drastically reduced or cut entirely.

The city's population has just about doubled since 1993 when the sales tax was first put to a vote. The city depended on revenue from property taxes before then, said Stephen Davis, who worked in the city's Financial Department from 1991 to 2006 and served as the budget administrator. The population was about 42,000 in the mid-1990s, according to the city's 2030 plan. The population in 2019 was more than 85,000, according to census data.

Fayetteville overall has a 9.75% sales tax rate. One penny of the 2% city sales tax is the one up for continuation. Voters renewed the other penny in an April 2019 special election to pay off $226 million in bond projects. 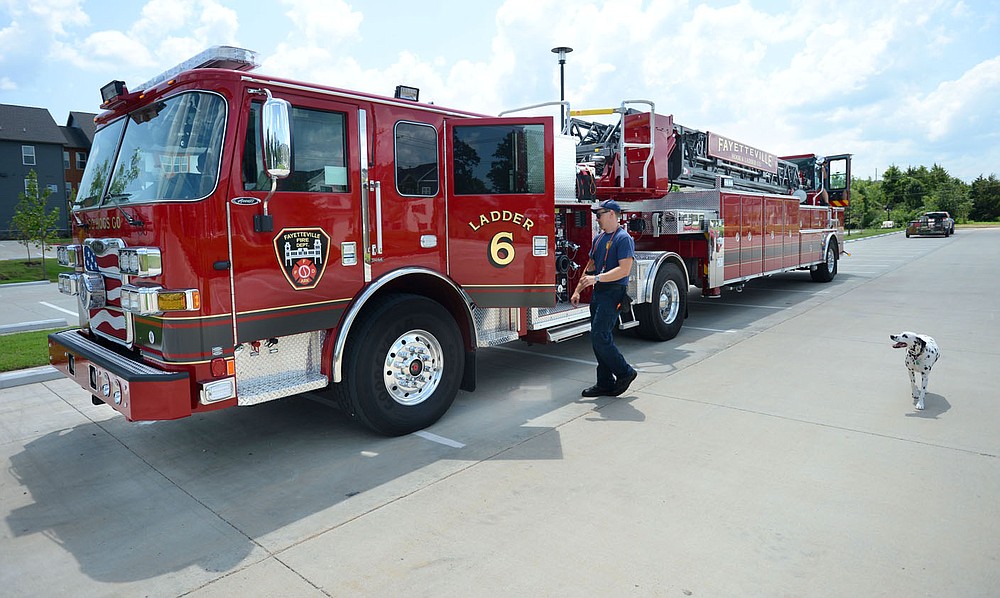 Martin Striefler, a firefighter with the Fayetteville Fire Department, and his dog, Ember, walk Tuesday, July 27, 2021, back to the cab of the Ladder 6 while training on the department's new tiller truck off Hollywood Avenue. The department bought its first tiller truck for $1.4 million using money from its share of city sales tax revenue. Early voting starts Tuesday, and Election Day is Aug. 10, to continue the 1-cent tax for operations and some capital expenditures. Visit nwaonline.com/210728Daily/ for today's photo gallery. (NWA Democrat-Gazette/Andy Shupe)
More News

City voters will decide whether to extend the 1% local sales and use tax in Fayetteville from its June 30, 2023, expiration to a new expiration date of June 30, 2033.

Early voting is 8 a.m. to 4:30 p.m. Tuesday through Aug. 9 at the County Clerk’s Office of the Washington County Courthouse, 280 N. College Ave. The courthouse will be closed for the weekend days, Aug. 7 and 8.

For election questions, call the Washington County Clerk’s Office at 444-1711.

For more information on the election issue, go to: