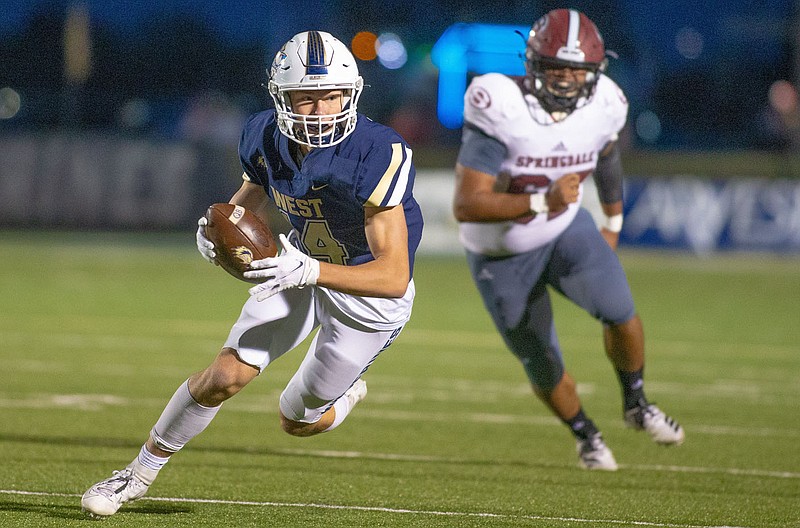 Ty Durham (14) of Bentonville West runs with the ball after a catch during an Oct. 2 game against Springdale at Wolverine Stadium in Centerton. The Wolverines are ready to start a new season when they hit the practice field Monday afternoon. / Special to NWA Democrat-Gazette/ David Beach

CENTERTON -- Bentonville West ended its 2020 football season by not playing a postseason game for the first time in the school's brief history.

It wasn't supposed to be that way, though. West (6-4, 4-2) had finished third in the 7A-West standings and was scheduled to open the Class 7A State Playoffs with a home game against Little Rock Catholic, but the Wolverines were never able to play that game after a number of players and coaches tested positive for the coronavirus and others had to be quarantined.

That's now in the past, and West coach Bryan Pratt wants to keep it that way when the Wolverines open preseason workouts Monday afternoon.

"One of the things we talk about is when the season is over, that team dies," Pratt said. "We have a whole different team this year, so we put that behind us. We haven't used that as motivation because it was a weird situation with what we've had to deal with in society right now."

Pratt has relished more normal conditions this summer as West was able to participate in team camps and 7-on-7 competitions. That wasn't the case last year, and the Wolverines had sophomores like Ty Durham and Braden Jones immediately thrown into the fire with limited workouts as they played on national television at Broken Arrow, Okla.

West's players have spent the offseason battling against each other for starting roles and playing time. Now Pratt is ready to see the Wolverines pull together in time for their scrimmage game Aug. 17 against Fort Smith Northside and their season opener 1o days later against Mansfield, Texas.

"We've practiced a lot with spring ball, team camps and 7-on-7," Pratt said. "So we've addressed what we've had to do right now. Now it's team unity I want to see.

"We've spent so much time competing against ourselves, but now it's a matter of getting ready for an opponent. I want to see our kids as they game plan for a week because it gets important during the season."

Two head coaches will make their preseason debuts with their teams Monday after they were chosen in April to take over their respective teams. Brey Cook assumes the head spot at Pea Ridge after being an assistant there last year, while former Greenwood offensive coordinator Zach Watson takes over at Elkins.

Cook, a former offensive lineman standout at Springdale Har-Ber and Arkansas, said he expects 68 out for the Blackhawks' afternoon workout. Something that will need to be addressed quickly, according to Cook, is the need for Pea Ridge to show some "physicality in pads."

"We had a helmet issue during spring workouts because of covid," Cook said. "So we weren't able to have a lot of full-pad practices. We scheduled as many team camps as we could during the summer to get those reps, and we did a great job with Bentonville West, Har-Ber and other schools to get those practices in.

"We need practices in those full pads, physicality and tackle football for the next two weeks."

Watson said he was only about to install about 60 percent of his no-huddle, upbeat style of football during Elkins' spring workouts because of players still in baseball. That's where summer workouts came in handy, and Watson said he now has "about 95 percent" installed before the Elks take the field.

"They were no-huddle, but I don't think they were used to the pace in which I like to play," said Watson, who hopes to have 47 at practice Monday. "Getting that implemented took a little adjustment, but by the end of the spring they started to flourish and figured out the pace at which I want to play at.

"The great thing is we've been going Monday through Thursday during the summer, with the exception of the dead period. We closed that gap, so Monday is a matter of fine-tuning some things and installing the rest of the stuff we want in."

NOTE Mountainburg will not play a scrimmage game.