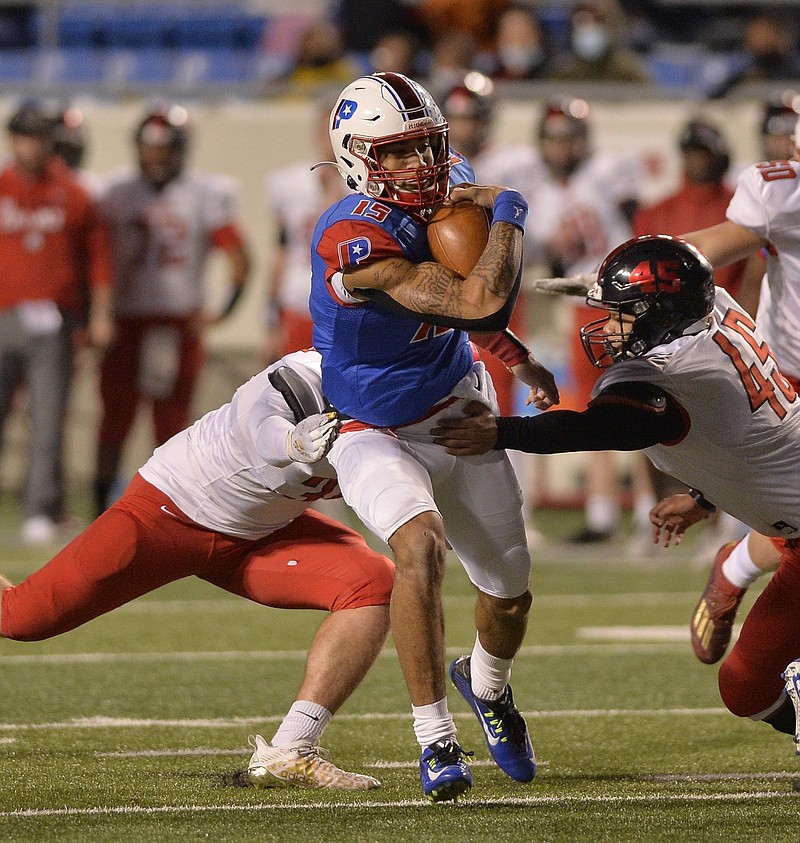 The Arkansas heat can make summer workouts brutal for college football athletes, especially incoming freshmen making the transition from high school. For some, just the thought of doing strength and conditioning drills in 100-degree temperatures is intimidating.

But for a guy like former Little Rock Parkview quarterback Landon Rogers, grueling practice sessions aren't frightening at all. In fact, he embraces it.

"Man, Coach [Brad] Bolding kind of coached us like we were in college," Rogers said of his high school coach. "His workouts were hell. Then coming up here to Fayetteville, it's like, 'Ah, it's the same thing.'

"To me, it's all a mindset, and coming from him, Coach Bolding really prepared me in a way that I didn't think I was prepared. Turns out, he did a [great] job because I've been ready for it."

Staying ready is the next step for Rogers, who's gearing up for his freshman season for the University of Arkansas. He said preparation was something he never had to worry about at Parkview because of Bolding's coaching style.

"When it comes to the running, the physicality of the game, just how he approaches it mentally and the way he prepares his body, Landon's 100% ready," Bolding said. "Really, any guy that we have come through this program, we make sure they're ready for that, and a lot of them are blessed enough to carry that on to the collegiate level. The thing with Landon is how quickly he learns their system.

"Everybody's philosophy is different, everybody's X's and O's are different. But he's got a mindset that will allow him to adjust accordingly. He's that gifted, not just physically but mentally."

Those attributes helped Rogers become one of the state's most sought-after players during his playing career with the Patriots.

His performance drew attention from several Division I programs and led to offers from schools such as Arkansas, Houston and Kansas. He committed to the Razorbacks on April 16, 2020, but decided to reopen his recruiting on July 4.

He said he was still sold on the Hogs, but he felt he may have pounced on the offer too quickly. Three weeks later, Rogers re-committed to Arkansas.

"That staff sold me from the start, honestly," Rogers said. "They're all energetic. And just talking to them on the daily like I did, it really pushed me to make that step because I've always wanted to be a Razorback."

Rogers' decision gave him a chance to focus solely on a senior year filled with high expectations. The Patriots averaged nearly 33 points, including 49 in a season-opening blowout of Little Rock Southwest, with Rogers at the controls. He threw for 1,247 yards on 92-of-150 (61.3%) passing and 6 touchdowns, and he ran for 1,148 yards on 150 attempts with 22 touchdowns.

Parkview finished 8-2 and lost 7-0 at Sylvan Hills in the quarterfinals of the Class 6A state playoffs. His final statistics would have been larger if the Patriots didn't have some of their games canceled because of covid-19.

"We dominated at times," Rogers said. "It was like we were unstoppable at times, and it was fun. Sometimes stuff happens though. But it was just a fun time, high school in general. You can't ever forget that. You can always think back and remember it."

As a Razorback, Rogers is eager to make more memories. He said he's been hitting the playbook hard because he believes that's the key to not only his development but also to opportunities he sees on the field.

Bolding, whose team is expected to be in the mix for a state title this year, thinks that whenever Rogers' number is called, he'll be the same difference-maker for the Razorbacks that as he was for the Patriots.

"He's got a ceiling that I don't even know where the ending is," Bolding said. "That's kind of scary. He's extremely gifted and talented athletically. He can jump, run, he's got ginormous hands, he's big. And the thing is, he's going to get even bigger, faster and stronger.

"It's just really scary to think about what he'll be able to do over the next 4-5 years."

NOTEWORTHY Was ranked as the No. 5 player in Arkansas by Rivals. … Rated as a three-star prospect by Rivals, ESPN and 247Sports. … Had scholarship offers from Arkansas, Houston, Kansas, Louisiana-Lafayette, Louisiana-Monroe, North Texas and Tennessee-Martin. … Combined for more than 4,600 yards of total offense and 57 touchdowns during his final two seasons at Parkview. … Completed 63% of his passes (64 of 102) for 713 yards and 8 touchdowns as a sophomore.