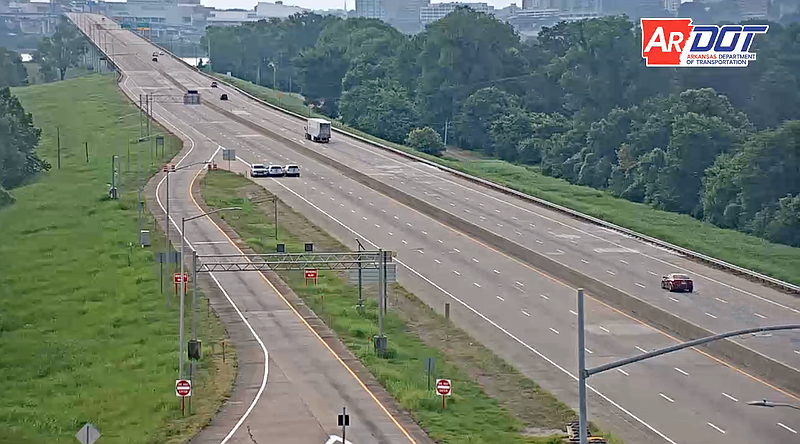 Vehicles travel east on Interstate 40 toward the Hernando de Soto Bridge on Sunday morning in this screenshot of video provided by the Arkansas Department of Transportation.

MEMPHIS — Authorities on Saturday night reopened the Interstate 40 bridge linking Arkansas and Tennessee that had been closed ever since a crack was discovered in the span in May.

The Hernando de Soto Bridge, a key artery for U.S. commerce, reopened to the public for eastbound traffic, according to video shared by the Tennessee Department of Transportation.

The eastbound lanes had previously been scheduled to open on Monday, but officials recently moved up those plans. The transportation department has said it plans to reopen the bridge's westbound lanes Aug. 6, though it said that could also get moved up.

The I-40 bridge over the Mississippi River was shut down May 11 after inspectors found a crack in one of two 900-foot horizontal steel beams critical for the bridge's structural integrity, forcing thousands of trucks and cars to detour to the nearby Interstate 55 bridge during the I-40 bridge's repairs.

Beverly Robertson, CEO and President of the Greater Memphis Chamber, celebrated the news of the re-opening.

"The trucking industry has lost a lot with us being the third busiest trucking corridor in the country. So many goods and services come here and then go out from there," Robertson told WREG-TV.

An estimated $9.5 million has been spent so far on the bridge's repairs, design and inspection after the closure, an Arkansas transportation official said this week. The cost will be split between the two states.

I-40 runs from North Carolina to California. Manufacturers and shippers rely on the interstate to move products and materials across the river. About 50,000 vehicles typically travel across the bridge when it's open, with about a quarter of those being commercial trucks, Tennessee transportation officials say.