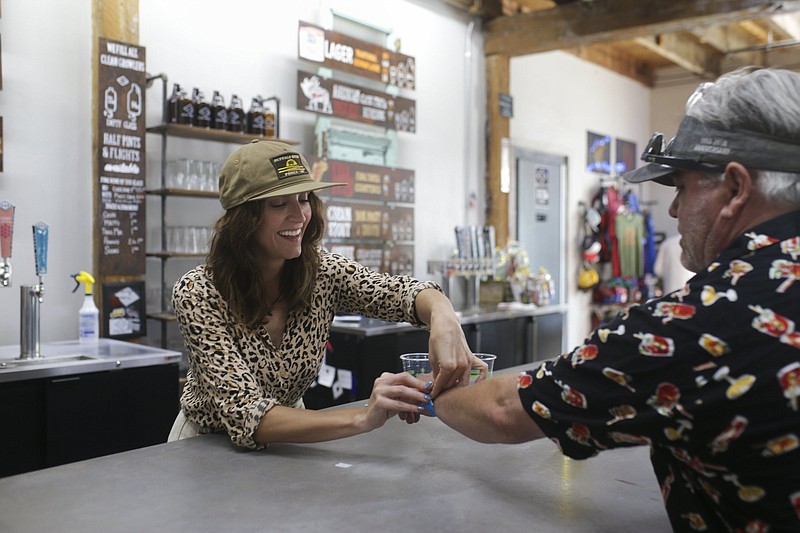 Jessy McCormick, director of hospitality, puts an entertainment district wristband on Clayton Morgan of Rogers, Friday, July 23, 2021 at Ozark Beer Company in Rogers. They expanded their patio area and added to their capacity. The brewery is in downtown Rogers and was the second largest beer producer in the state in 2019. Check out nwaonline.com/210724Daily/ for today's photo gallery. (NWA Democrat-Gazette/Charlie Kaijo)

ROGERS -- Ozark Beer Co. has added a patio to its downtown brewery and is expecting the delivery of a new brewing system in September that will double its production capacity.

Andy Coates, co-owner of the brewery, made clear that the additional capacity will be focused on meeting the needs of Northwest Arkansas and southern Missouri customers who get their suds at the brewery, in area bars and restaurants, and at retail outlets.

Ozark Beer Co. was Arkansas' second-largest brewery by production in 2019, according to data provided by the Alcoholic Beverage Control Division of the Arkansas Department of Finance and Administration, the most recent statistics available.

Mart Shutter, marketing director for Ozark Beer said the company is adding a new system to allow it to brew about twice as much beer annually. The company also will be adding a pilot system to produce smaller batches of specialty beer and will be getting two new 60-barrel tanks.

In early 2020, just before the coronavirus pandemic struck throughout the state and nation, Ozark Beer added a centrifuge to improve its filtering system,upgraded its canning line, and increased tank capacity.

Ozark Beer first began production in 2013 in Rogers, moving to its current location, which serves as a production facility and taproom downtown in 2017. The company is owned by Laci Bray and Coates, her husband, as well as Jefferson Baldwin.

The high price of lumber earlier this year, nearby street construction, and other factors delayed Ozark Beer's plans for a deck-like patio outside its downtown brewery. Then one day things changed.

Coates decided to demarcate the boundary of the patio area with conventional fencing, wooden barrels and metal barrel racks from the brewery and to add tables and benches. The place already had been approved by the state for outdoor service. Customers just needed a place to sit and drink their beer.

"Andy said, 'Let's just do it,'" explained Shutter. "We improvised a bit, but it's working. Just having 10 people out there just adds so much life."

The ad hoc system will remain until road construction near the brewery is completed.

In response to emailed questions, Doralee Chandler, directer of the Alcoholic Beverage Control administration, explained that breweries in Arkansas don't have to have special or supplemental permits for outdoor seating. She added that they do have to submit a letter asking for an expansion of the floor plan and an agent does visit the property to make sure the required signs and fencing are in place before approval is granted.

"After the covid situation most have expanded to some outdoor seating," she said of breweries around the state.

Bart Watson, chief economist for the Brewers Association, a trade group for craft brewers from across the U.S., said things are looking up for breweries that were forced to scramble over a year ago when the pandemic caused them to shut down taprooms and slashed their sales to places like restaurants, which also were forced to shut their doors for a time.

"We are seeing recovery but it's hard to say how far along we are, because nobody really knows what the recovery from a pandemic looks like," Watson said in a recent phone interview.

The second wave of cases currently hitting the country, caused by the delta variant, could be a complication, but it's a little too early to tell how serious it will be, Watson said. He noted the severity of the pandemic is varying greatly around the country, so the impact likely will be localized, unless it gets dramatically worse.

He said sales of draft beer to restaurants as well as at brewery taprooms is up when compared with last year, while off-site package sales -- something that kept many operations afloat in the worst parts of the pandemic -- are trending downward slightly.

While it is down from peak levels during the pandemic, Watson said to-go beer sales is something that likely will stay a key element of brewery sales going forward. He said many breweries invested in outdoor space during this and last summer and it seems to be resulting in increased sales.

"We're not completely back to where we were but we've made progress," Watson said.

Sylvia Blain, executive director of the Arkansas Brewers Guild, said Arkansas has 47 operating breweries, some of which operate more than one taproom. She said two brewers, Wicked Head in Trumann and Social Project in Bentonville, are expected to open in the near future.

Arkansas producers brewed 16% more beer in 2019 than in the year before, according to information provided by the Alcoholic Beverage Control Division in November. The state's brewers reported production of 40,818 barrels of suds in 2019, up from 35,193 barrels in 2018. A barrel of beer contains 31 gallons.

Lost Forty Brewery in Little Rock was the state's largest beer producer, making 14,238 barrels in 2019, down slightly from the previous year. The company's production made up nearly 35% of the state's total. Ozark Beer Co. was the second-largest producer in 2019 with 5,003 barrels, followed by third place Bike Rack Brewing of Bentonville with total production of 3,783 barrels. 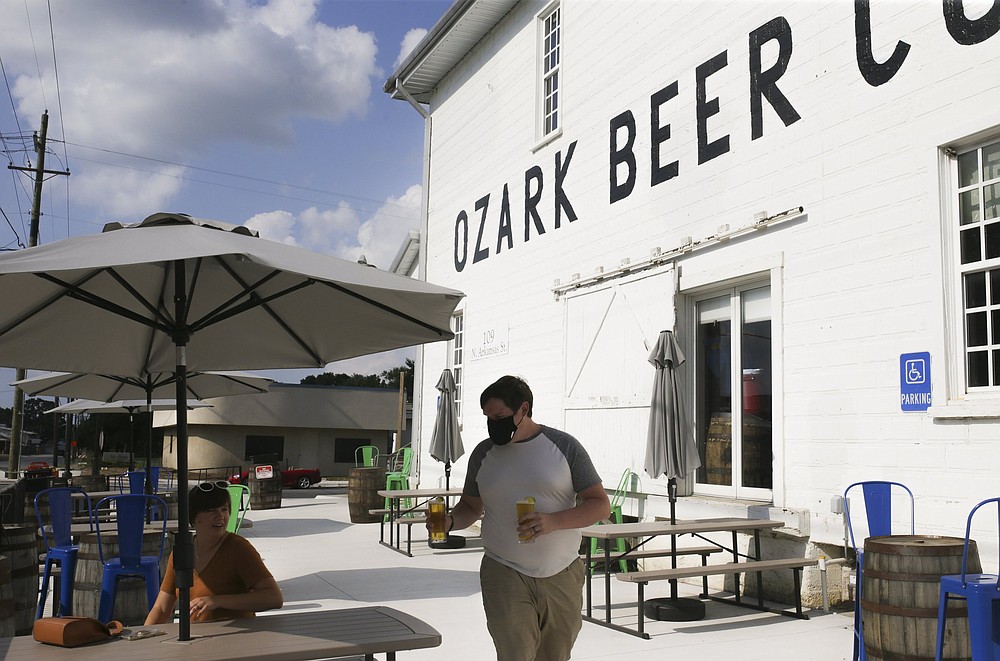 Elliot Holder of Pea Ridge (center) joins his wife Cassie Holder as he carries drinks, Friday, July 23, 2021 at Ozark Beer Company in Rogers. They expanded their patio area and added to their capacity. The brewery is in downtown Rogers and was the second largest beer producer in the state in 2019. Check out nwaonline.com/210724Daily/ for today's photo gallery. (NWA Democrat-Gazette/Charlie Kaijo)