Barred from shop in '52, woman tries on dress 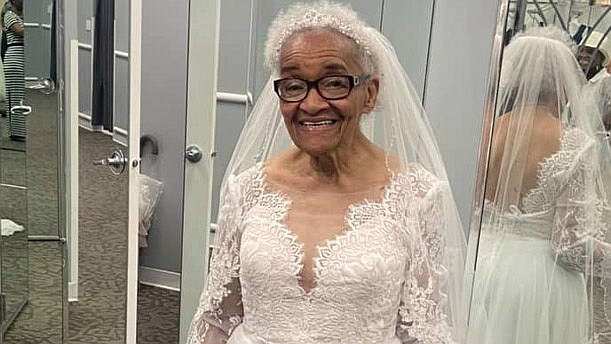 Martha Tucker, 94, tries on a wedding gown for the first time. Tucker always dreamed of wearing a traditional wedding gown, but when she got married in 1952, she was barred from entering bridal shops due to racial segregation. MUST CREDIT: Angela Strozier.

Martha Tucker always dreamed of wearing a classic white gown on her wedding day. But when she got married in 1952, she was barred from entering a bridal shop because of her race.

As a Black woman in Birmingham, Ala., she was forbidden from trying on her dream dress: An embroidered white gown with lace overlay and long sleeves. At the time, "I wasn't even thinking about buying a wedding dress because I knew I couldn't go in the store," Tucker, who is now 94, recalled.

There were no Black-owned bridal stores in the city, she said, and white-owned retail stores didn't allow Black people to try on clothing. "If you bought anything you had to go in the basement and get used stuff," Tucker said.

Jim Crow laws in Birmingham also prohibited her from being served in the same restaurant or riding in the same vehicle as white people. Black people were also barred from playing games such as checkers with white people.

Tucker and her husband wed in a simple ceremony in their pastor's living room. Not having a traditional wedding -- or dress -- has been a sore spot ever since. "I always have been sad about it because I felt like I should have been able to wear it if I wanted to," Tucker said.

Recently, though, Tucker's wish to wear a wedding dress was finally granted, when her family took her to a bridal shop for a long overdue gown fitting -- nearly 70 years after her wedding day.

The idea came to her granddaughter, Angela Strozier, 46, when they were watching the 1988 film, "Coming to America." During a wedding scene, Tucker -- who has four children, 11 grandchildren, 18 great-grandchildren and one great-great-grandchild -- turned to her granddaughter and said: "I've always wanted to wear a wedding dress. I've been wanting to do that for a long time, ever since I got married."

Strozier had heard stories about the racism and ridicule her grandparents had endured, but until that moment, she hadn't realized that her grandmother never had the chance to try on a wedding dress -- simply because she was Black.

"It was a terrible reason why she couldn't," Strozier said. "It shocked me and motivated me to get it done."

SURPRISE AT THE SHOP

After Tucker made the comment about longing to wear a wedding dress, Strozier booked an appointment at David's Bridal in Hoover, Ala., for a gown fitting. She then invited several of their family members to surprise Tucker at the shop.

"I just wanted to do this for her," Strozier said. "I wanted her to understand that a dream deferred didn't have to be a dream denied." She described her grandmother as "a giver," who dedicated her life to advocating for voting rights. In 1963, Tucker became a poll worker -- a duty she proudly upheld until after the 2020 election, which she decided would be her last season.

While raising her children, Tucker worked as a housekeeper for a number of years, as well as in the nutrition department at a high school, before she retired in her mid-70s. She also taught singing lessons and was in multiple gospel groups throughout her life. She is currently the oldest member of her church choir.

Tucker is a big sports fan, too, and is especially fond of basketball -- her favorite NBA player is Stephen Curry. She says she has never missed a sports game of one of her children, grandchildren or great-grandchildren.

"She is our hero," Strozier said. "Anything she expresses that she wants to do, we try to make it happen for her."

HAD HER MAKEUP DONE

The bridal appointment was scheduled for 1:30 p.m. July 3, and before taking her grandmother to the shop, Strozier took her for lunch and arranged for her to have her makeup done.

By the time they arrived at David's Bridal, Tucker felt like a beaming bride-to-be, she said. "I was too excited," she added.

Mary Adams, a bridal stylist at David's Bridal, gave Tucker a tour of the store and chatted with her about what she had in mind for her dream dress. Although it was clear that Tucker wouldn't be buying a gown, Adams said she still took the selection process as seriously as she would with any bride at the free fitting.

"When I heard her story, that made it all the more special," said Adams, 28. "Being a young Black woman, I felt sorrow that she wasn't able to experience something that every young girl looks forward to -- their wedding day."

The opportunity to help Tucker fulfill her long-held wish, she said, was "an honor."

Shortly into the appointment, Tucker pointed to a particular gown on a mannequin and enthusiastically declared: "That dress has my name on it." When she emerged from the dressing room -- wearing a V-neck sparkling sequin lace gown with sheer sleeves and a crystal-beaded waistband -- "my dream had come true," Tucker said.

Gazing at the mirror, Tucker was in disbelief at the bride before her. "I asked the mirror, 'Who is that?' " Tucker said. "I really can't explain how I felt."

Her family, as well as staff at the store and other brides who were there for their own appointments, gathered around. "She came out, and the tears began," Strozier recalled. "I thought she looked like a doll. She was smiling so big, and it made my heart smile. It was a priceless experience."

"Everyone just stood around in awe. It was a beautiful moment," echoed Erica Tucker, 36, one of Tucker's granddaughters who was at the appointment. "Every part of me was just happy that she was happy. I knew what it meant to her, and so it meant a lot to me."

Staff at the bridal shop said the experience was deeply moving -- and memorable -- for them, too. "She was absolutely stunning. I will never forget it," Adams said. "The whole store just lit up."

But no one was more delighted than Tucker, who tried on a second dress in a similar style, and even slipped on a garter.

"It made me feel like a real bride. I wish I had been in that dress when I got married," said Tucker, whose husband died in 1975. "I wish he could have seen me in it."

Still, she decided it was better late than never. "I always said before I left this world that I was going to get in a wedding dress," Tucker said. "And I'm glad I did." 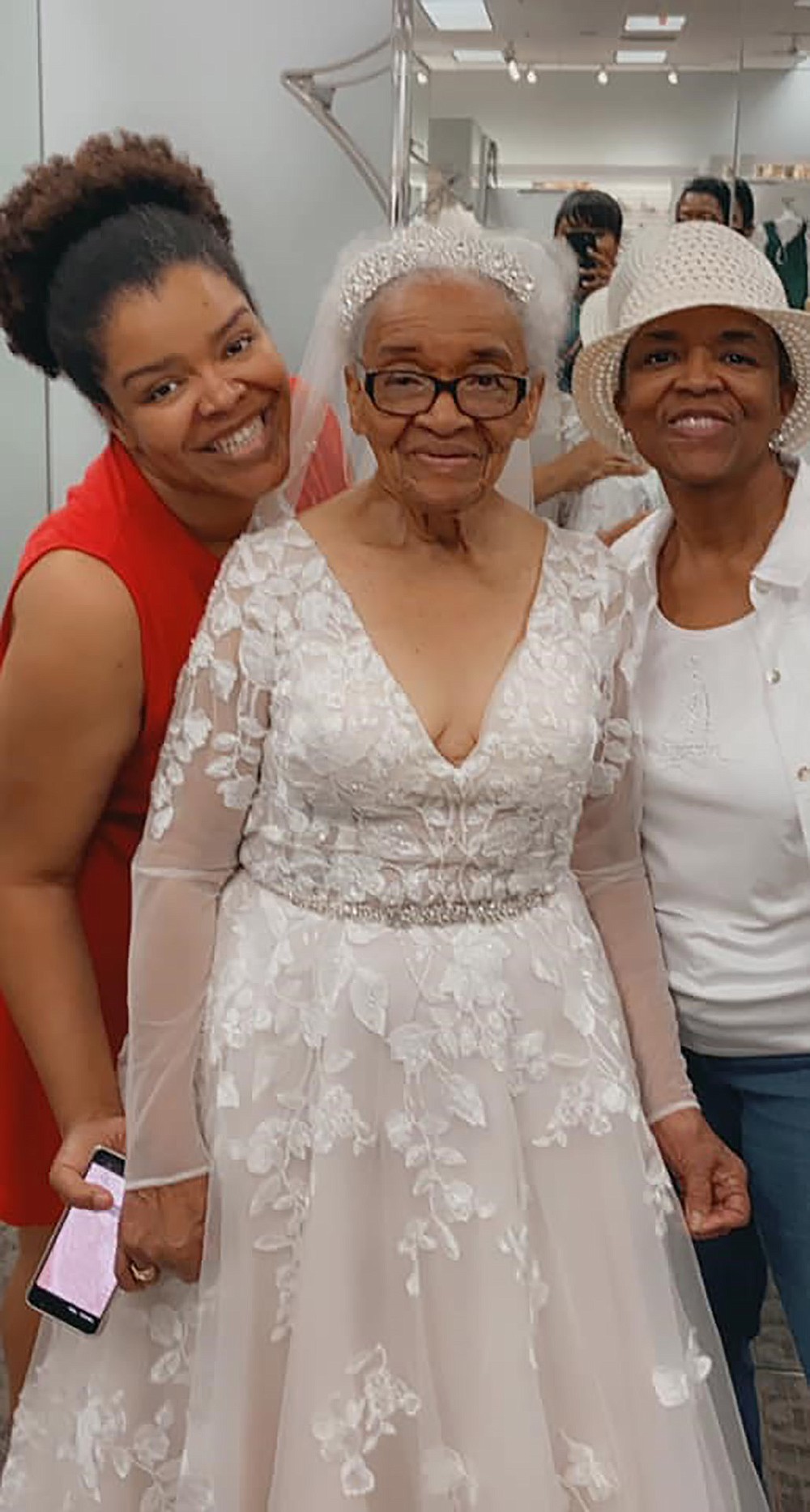 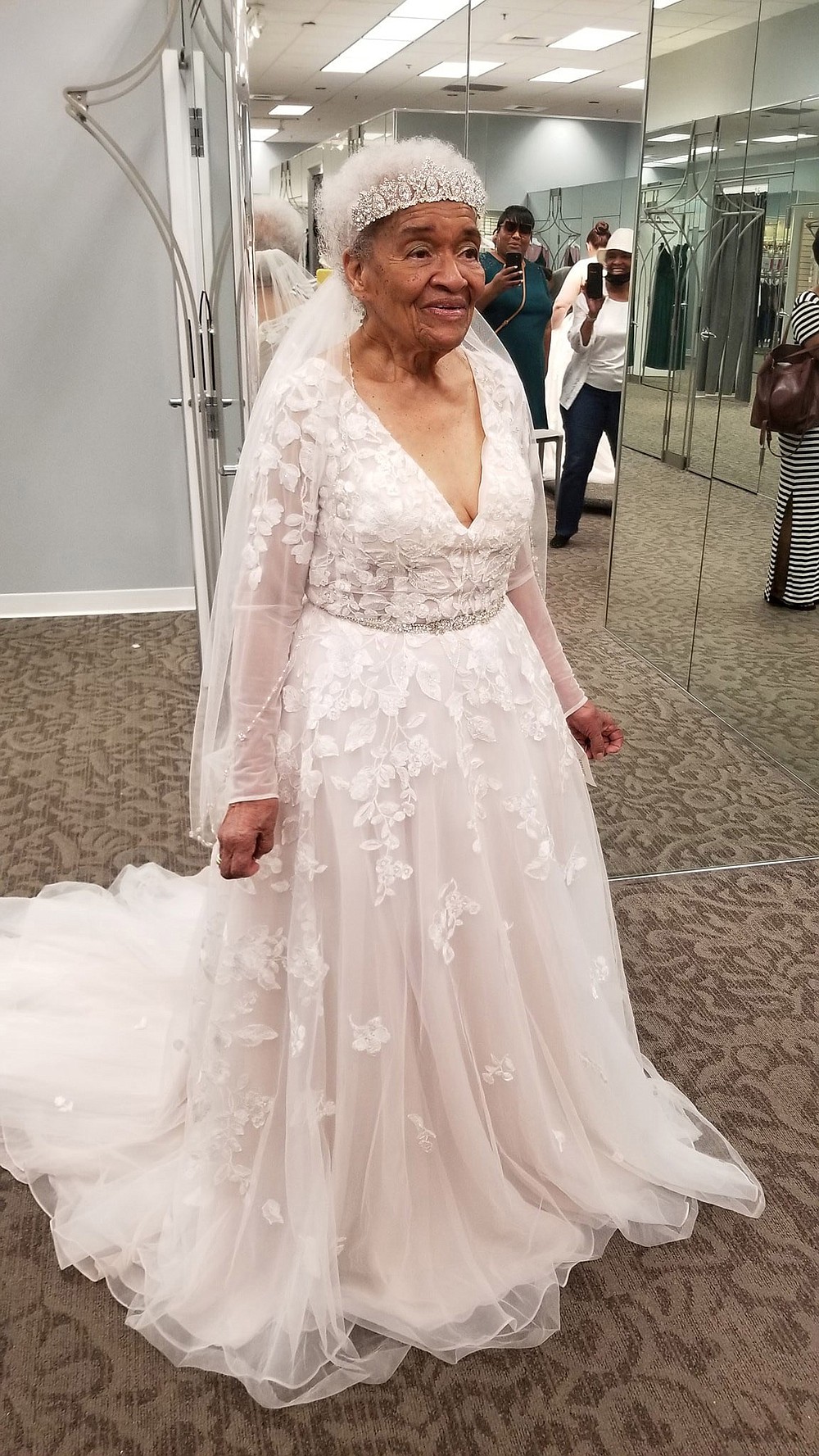 Print Headline: Barred from shop in '52, woman tries on dress