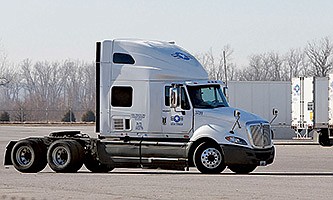 USA Truck on Thursday reported its best first-quarter result in company history, with net income or $3.6 million and earnings per share of 40 cents.

A year ago, as the pandemic began sweeping across the nation, the Van Buren trucking and logistics company reported a loss of $2.6 million, or 30 cents per share.

"The first quarter marked the best first quarter earnings in the company's history," James Reed, USA Truck's president and chief executive, said in a news release. "I am proud of how the team has bought into our vision, and how our transformation continues to manifest itself in improved operating and financial results."

The consensus estimate of analysts compiled by Zack's investment research was 16 cents for the quarter that ended March 31. Earnings were released after the stock market closed Thursday.

The logistics business also showed significant improvement with load volume increasing by 21.4% in the quarter. Logistics reported operating revenue of $68.4 million, nearly double the $35.8 million recorded in the same period last year. Operating income in the segment was $2.5 million, compared with a loss of $624,000 last year.

Nevertheless, Reed said the company is retaining drivers, noting that as the recruitment of drivers continues to be an issue "our driver retention strategy contributed to this quarter's record performance, with lower turnover and reduced costs in the most difficult driver hiring environment in recent memory," he said in the release." Our much-improved retention levels of current drivers are evidence that there has been a positive shift in the driver experience at USA Truck."

The company's management team has scheduled a conference call for 8 a.m. today to discuss the first-quarter results. Participants can dial (877) 407-9205. A live webcast of the conference call be broadcast in the investor relations section of the company's website at usa-truck.com.

USA Truck has more than 2,100 employees and primarily serves the eastern half of the United States and parts of Mexico.