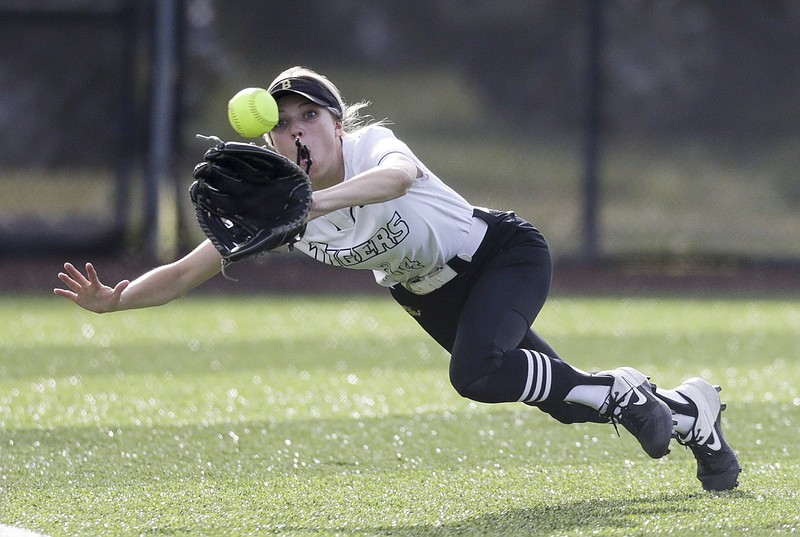 Bentonville left fielder Alleyna Rushing leaps to make an out during Thursday’s 9-0 victory over Rogers in a 6A-West clash at Bentonville High School. More photos at arkansasonline.com/430rhsbhs/. (NWA Democrat-Gazette/Charlie Kaijo)

BENTONVILLE -- Emily Perry got Bentonville off to a fast start Thursday, but the Tigers were far from done.

Perry's solo home run to lead off the bottom of the first inning was all the offense Bentonville needed but the Tigers did not stop there, rolling to a 9-0 win against Rogers High in a battle of 6A-West leaders at the Tiger Athletic Complex.

"That's why she is in the lead-of spot," said Bentonville coach Kent Early. "That was huge. She can change the game with one swing of the bat. That's her fourth game this season to lead off with a home run. It sets the tone and that's why she's there."

The dinger was the start to a big day at the plate for the senior second baseman. Perry added a double and another run-producing single to finish a 3-for-4 day at the plate.

"I was looking for a first-pitch strike," said Perry. "I didn't get that and I swung at a rise ball. But you have to swing early in the count with Madison or she'll get you with that rise ball and she knew I would chase it."

Perry's blast was a no-doubter off the bat and cleared the left-field fence with ease, giving Bentonville (24-1, 12-1 6A-West) all the momentum it needed to secure the No. 1 seed from the West at the Class 6A state tournament in Cabot in two weeks.

The Tigers added another run later in the first on a wild pitch to make it 2-0.

That was all the run support senior pitcher McKenzie Vaughan needed. The right-hander allowed six hits and struck out three to earn the complete-game win, but the Tigers turned in multiple defensive plays that were highlight-worthy, particularly left-fielder Alleyna Rushing.

"The girl that made the difference in the game was Alleyna Rushing," said Rogers coach Mike Harper, whose team will be the No. 2 seed from the West and also receive a first-round bye in the state tournament. "Those two great plays out there ... one of them would have scored at least two runs if it gets by her. She played great. They made several diving plays, their right-fielder made a play. They were just all over the place."

The first defensive gem turned in by Rushing came in the fourth when Rogers (22-3, 12-2) got a lead-off single by Jenna Williams and a walk by Kadence Janney. With two outs, Kylee Clowers lined a fast, sinking hit down the left-field line that looked like extra bases. Rushing dashed to her left and laid-out to snare the ball just inches from the turf, likely preventing two runs from scoring.

Then in the sixth inning, Rushing made an even more spectacular play on a bullet off the bat of Rogers pitcher Madison Heinle, again making a sliding catch on the line in left.

The Tigers broke the game open in the bottom of the fifth inning, scoring four runs. Perry blasted a one-out double to start the rally and scored on Kenzie Derryberry's RBI single. Derryberry stole second and third base and scored on a two-run double by Kasey Wood to make it 5-0 and Trista Peterson also added an RBI single to make it 6-0.

Perry said getting the early lead was big for the Tigers after falling to Rogers 2-1 earlier in conference play.

"We were already hyped up and had all this adrenalin," said Perry. "We were just happy to be playing and we were ready to win. Hitting that home run and having my team cheer for me, that was just awesome."