Oscar win deserving for 'Round' 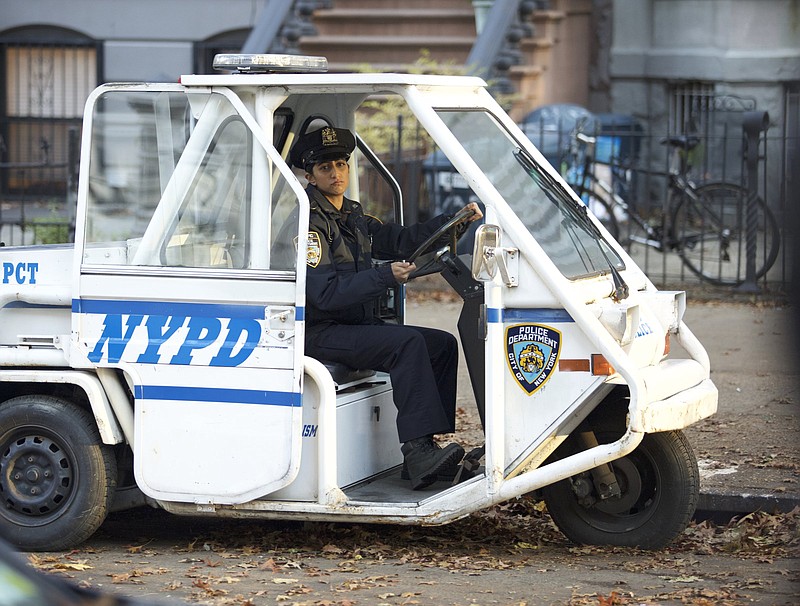 Despite what you may have heard, Officer Slater (Sunita Mani) isn’t really a “fascist.” Like every other character in “The Outside Story” she turns out to be a pretty nice person.

People sometimes ask me if I get to vote on the Oscars. No, I do not.

I'm not a member of the Academy of Motion Picture Arts and Sciences, I don't work in the film industry. I don't want to vote on the Oscars, I think it's inappropriate, sort of like baseball writers voting for who goes into the Hall of Fame.

But I am grateful that most studios, as a courtesy, send me computer links and screeners for the nominated films, and usually by the time Oscar night rolls around I have watched most of those in contention, which probably puts me ahead of a lot of members of the Academy.

I didn't see but three of the films nominated for Best International Picture this year, but was glad to see Thomas Vinterberg's "Another Round" (the Danish title is "Druk," which Google Translate tells me means "binge drinking") win. I was also aware that Vinterberg's 19-year-old daughter, who was poised to make her film acting debut in "Another Round," was killed in a car wreck four days after filming began.

Vinterberg's ex-wife, Maria Walbom, was driving with their daughter to Paris when another car crossed the centerline and hit their vehicle head on.

"Someone was looking at a cellphone," Vinterberg said as he accepted the award. "We miss her and we love her."

"Another Round" is one the best films of last year; certainly deserving of winning. But so is "Collective" and "Quo Vadis, Aida." I imagine the other films were of quality too. I have a hard time scoring works of art; they either work or they don't. It's not really a competition. Winning only means more people voted for you; it doesn't prove anything.

And I doubt the Academy voted for "Another Round" because Ida Vinterberg died. Most members of the Academy found out about that when Vinterberg made his speech. I'd only found out a few days earlier, when director Rod Lurie -- who lost his 27-year-old son Hunter while he was in preproduction for his movie "The Outpost" -- talked about it in a Facebook post.

Obviously an Oscar is no recompense for the death of a child.

I'd prefer to believe there was no sympathy vote for Vinterberg or Chadwick Boseman, who before the event was expected to win a posthumous Best Actor Oscar. Boseman's win seemed like such a lock that the producers re-arranged the usual order so that the Best Actor award would be presented last, giving the show a rousing, emotional climax.

Only Boseman didn't win; the award went to Anthony Hopkins, who was asleep in the U.K. when his name was read.

I like that twist; if nothing else, it proves Price-Waterhouse security can be trusted. No one knew who the Best Actor winner was going to be.

This has nothing to do with whether Boseman or Hopkins gave the better performance; I don't know how you could decide that. Is there a higher degree of difficulty in playing a hothead cornetist or an octogenarian beset by dementia?

The only honest way to vote is for the performance that moved you more, and I don't think I could choose between them on those grounds.

Which is one reason I'm happy not to vote for anything as consequential as an Oscar. I'm happy to get the screeners, though.

I was positively charmed by Casimir Nozkowski's gentle "The Outside Story," available on the usual streaming platforms today.

It's a low-key sketch of a movie about introverted video editor Charles (Brian Tyree Henry), whose main gig is preparing the obituaries of celebrities who aren't dead yet, who gets locked out of his second-floor apartment and spends the day reluctantly interacting with street-level reality. Still raw from breaking up with his girlfriend Isha (Sonequa Martin-Green), Charles had planned on staying inside and feeling sorry for himself, but his sojourn in the fresh air starts him on the path to self-discovery and healing.

It's not an important or particularly perceptive movie, but it does showcase Henry's remarkable charm and allows him a lot of screen time in which to engage our empathy. "The Outside Story" feels like a throwback to '90s indie cinema with its modest ambitions and earnest performances (not all of which harmonize with the protagonist's).

Another enjoyable streaming option is Dutch director Ivo van Aart's "The Columnist," as bracingly visceral and over-the-top violent as "The Outside Story" is warm and cozy.

It's a revenge fantasy about newspaper columnist Femke Boot (Katja Herbers, who has had significant roles on "Westworld" and "The Americans"), who acts out against trolls who harass her online. She's just a little more extreme than Jay and Silent Bob were at the end of "Jay and Silent Bob Strike Back" (2001) when they spent their newfound wealth traveling the country and beating up everyone who "besmirched their good name" on the internet.