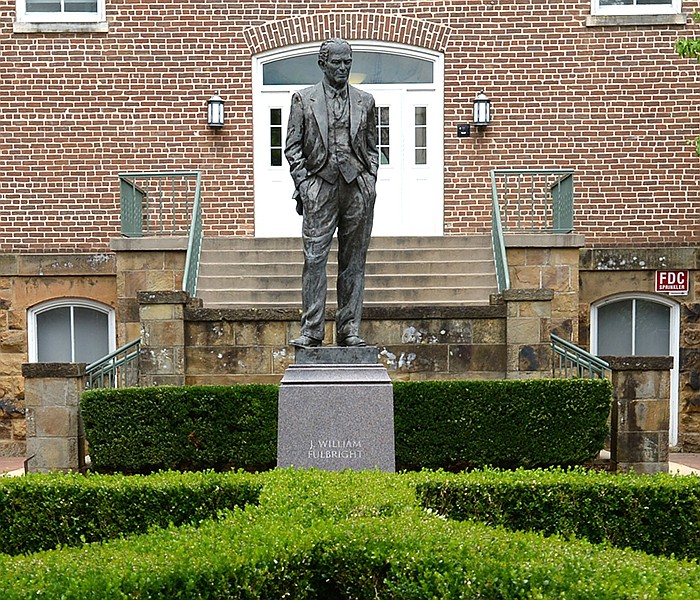 A statue of J. William Fulbright stands Wednesday, July 1, 2020. near the west entrance of Old Main on the University of Arkansas campus in Fayetteville. The statue was dedicated in 2002. Visit nwaonline.com/200702Daily/ for today's photo gallery. (NWA Democrat-Gazette/Andy Shupe)

Appoint a committee to make a recommendation and the gravitational pull toward change is immediate and strong.

Who, after all, wants to devote time and energy to a process that concludes nothing different needs to happen?

Some federal and state agencies are forced by either law or regulation to add a "do nothing" option to any formal proposal. That's because it's possible doing it the way it's been done might be just fine. It's also because it's highly likely the concept of doing nothing might not occur to those involved.

Since the August 2020 creation of a University of Arkansas committee to evaluate the institution's exaltation of former U.S. Sen. J. William Fulbright, the possibility of a "do-nothing" recommendation seemed out of the question. Yes, the university's College of Arts and Sciences has borne the name of Fulbright, a former president of the UA, since 1981. A statue of the man, long hailed nationally and internationally for his advocacy of peace and understanding around the globe, was given a prominent spot on the Fayetteville campus in 2002. President Bill Clinton in 1993 awarded the former senator the Presidential Medal of Freedom.

To say he earned such accolades is to state the obvious.

But it's what Fulbright didn't do that's become relevant, especially for students with a vested interest in cleansing the campus of symbolism that today appears to celebrate a leader who ignored the plight and dignity of Black Americans at crucial moments of the nation's history.

The University of Arkansas, in creating the committee, described Fulbright's as a "controversial and complex legacy." Part of that complexity comes from the dissonance created by his lack of support for Black Americans advocating for civil rights in the United States at the same time he championed peace and reciprocal respect among peoples on the world stage.

Here was a U.S. senator from a Southern state who got reelected for nearly 30 years, whose leadership created the international fellowship program that bears his name, who was the longest-serving chairman of the Senate Committee on Foreign Relations and who became a heroic figure for many Americans as one of the leading establishment voices opposed to the Vietnam War.

But he remained in office, in part, because he didn't embrace civil rights. In 1956 -- not long before the Central High School crisis over integration in Little Rock -- Fulbright even went so far, just like the other congressional representatives of Arkansas, to sign the Southern Manifesto. That document expressed opposition to racial integration in public places, including schools.

All the accolades for Fulbright are rooted in his considerable achievements, not his shortcomings on civil rights. But is it very hard to recognize how that statue looming over the campus highlights both? How Black students walking by the Fulbright College of Arts and Sciences may have trouble forgetting the senator's achievements were built in part on his willingness to forgo their future rights and well-being?

The consequences of Fulbright's calculated actions are that he would be judged harshly when times changed, and they did change. The committee has recommended removal of the Fulbright name from the college and relocation of the statue.

The committee's recommendation is just that. Any final decisions will come from the university's board of trustees. It is difficult to imagine the board has room for a "do nothing" option.

Whatever comes, it's fair to ask that Fulbright's contributions to the state, to education, to the nation and world be presented in context. He was in the wrong on a huge matter of public policy. He was in the right on other important issues. It's fair to point out which is which.

A university has customers. They are students and the people of Arkansas. They are, thankfully, an increasingly diverse collection of people. It's not hard to imagine that Fulbright, the man who made his political choices, might if he were alive understand his accolades would be reevaluated as the world became the more enlightened place he, in many ways, hoped it would become.

Perhaps it was inevitable, given former U.S. Sen. J. William Fulbright’s history, that a day of reckoning would arrive.