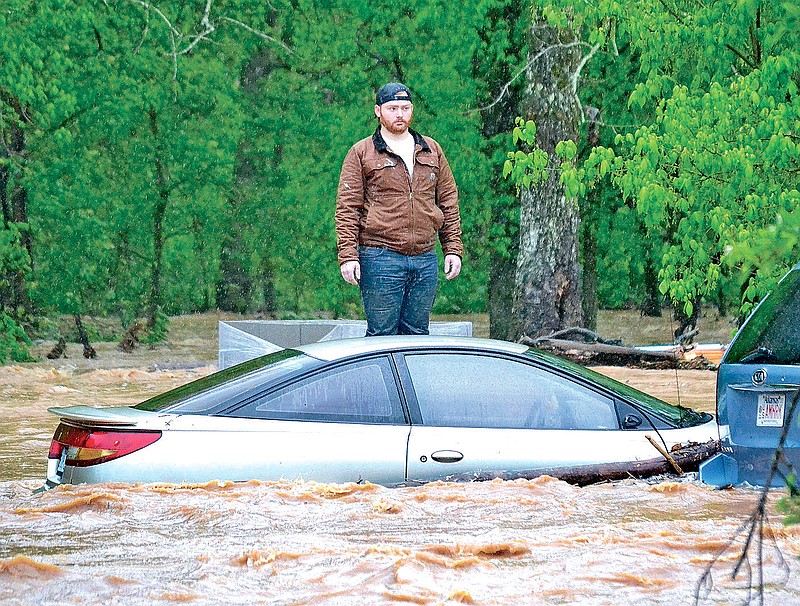 Jaxon Douglass, 21, waits Wednesday morning for water rescue personnel to reach him as he stands on concrete blocks outside his grandparents’ home in Little Flock in Benton County. His uncle was swept away by the water but was also rescued. More photos at arkansasonline.com/429/nwarain/. (Pea Ridge Times/Annette Beard)

Heavy rain blasted Benton and Washington counties Wednesday, flooding roads across the region and stranding some motorists in high water.

The National Weather Service office in Tulsa, Okla., said the storm system that began moving through Northwest Arkansas on Tuesday night dropped from 1 to 3 inches of rain across most of the area by mid-morning Wednesday, with rainfall of 4 to 6 inches reported in some areas.

Joe Sellers, meteorologist with the weather service, said the forecast called for another 2 to 4 inches of rain in the region before the system moves out of the area this morning.

The weather service reported a tornado was spotted 3 miles south of Garfield at about 8 a.m. Wednesday, but Robert McGowen, Benton County's administrator of public safety, said Wednesday afternoon he hadn't confirmed whether a tornado had touched down anywhere in Benton County and he hadn't received any reports of tornado damage.

McGowen said there were swift water rescues across the county.

[Severe Weather Awareness Quiz not showing up above? Click here to test your knowledge » arkansasonline.com/aware/]

The Springdale Fire Department responded to several reports of drivers moving their vehicles into water and becoming trapped, including one Springdale school bus. No injuries were reported.

The department responded to Kelly Road at 7:43 a.m. to assist with the bus, which was carrying two junior high school students, according to Trent Jones, district spokesman.

The bus driver decided it wasn't safe to proceed after coming upon an area where water was spilling out of a culvert so fast, it was chewing up the road, Jones said.

Two firefighters -- both of whom happened to be former Springdale school bus drivers -- reached the bus by driving a Chevrolet Tahoe down a nearby dirt road. They got the students off the bus and got them to school on the truck, Jones said.

"It was everybody working together to take care of each other," he said.

[Video not showing up above? Click here to watch » https://www.youtube.com/watch?v=twMJb-h-ajk]

Another Springdale school bus was delayed in the Camelot subdivision of Elm Springs when the driver was unable to find a way out of the subdivision not flooded. Six junior high students were on that bus, Jones said. Water on the road eventually receded enough so the bus was able to drive off.

Skelton said the Fire Department was called to six or seven instances of vehicles in water, but no injuries were reported.

Leslee Wright, a spokeswoman for the Bentonville School District, said a district bus slid into a ditch and into water on Battlefield Road near Central Avenue in Bentonville. She said one student was on the bus, but neither the student nor the driver was injured, and the student was taken to school.

Bentonville had several streets closed because of flooding. Bentonville Police Chief Jon Simpson said there were a couple of accidents, but no serious injuries.

Keith Foster, a Rogers Police Department spokesman, said Rogers had many closed roads, and firefighters responded to many swift water rescues. Foster said people were being advised to get out of their cars and get on the hoods or roofs until firefighters could come get them.

"The main thing is saving lives and then we will take care of the property," Foster said.

Steve Harrison, assistant chief with Central Emergency Medical Services, said the ambulance service had been called to four reports of vehicles trapped in floodwater as of mid-morning Wednesday. Harrison said no injuries were reported and no one was transported from those incidents.

In Pea Ridge, more than 4.5 inches of rain was recorded by noon Wednesday, according to retired meteorologist Bill Ryan and city street superintendent Nathan See. Numerous city streets and county roads in the area were quickly flooded. Even when the water receded, debris -- logs, rock, gravel, bricks -- was left behind, causing traffic hazards.

Sgt. Anthony Murphy of the Fayetteville Police Department said the department received three or four calls of accidents Wednesday morning, but none were specifically weather-related.

Kelly Cantrell of the Washington County Sheriff's Office said the Sheriff's Office had received nine weather-related calls beginning around 7:30 a.m., most of them reporting roads closed due to flooding or because of fallen trees blocking roads, Cantrell said.

"It doesn't take much water to wash away a vehicle," Jenkins said. "Inches of water can sweep one away."

Siloam Springs had received 3.8 inches of rain by 11 a.m. Wednesday, Sellers said. Flooding closed several city streets and police had to direct traffic at five intersections because power to the traffic lights was out.

Routes to Northwest Arkansas National Airport from the south, including Arkansas 112, Arkansas 612 and Arkansas 264 had flash flooding issues Wednesday, according to Alex English, airport marketing specialist at Northwest National. A couple of departing flights were delayed.

Lance Arbuckle, principal of New Technology High School in Rogers, said the school had some flooding in two parts of the building, including a hall between the biology lab and the physical science lab. Staff members used four wet-dry vacuum cleaners to suck up the water and sand bags to block additional water from coming in, he said.

"There wasn't any damage, other than we've got wet carpet squares we're drying out," Arbuckle said. "It was surprising because that kind of flooding hasn't happened to us before. But it was under control within an hour or so." 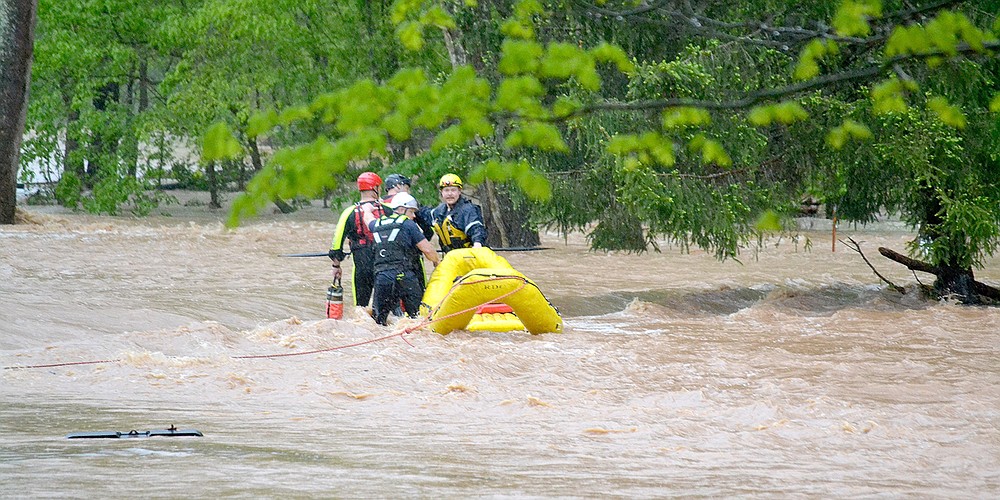 To see a video of Pea Ridge flooding, visit: nwaonline.com/428pearidgeflooding/

To see a video of Northwest Arkansas flooding, visit: nwaonline.com/428nwaflooding/

To see a video of Northwest Arkansas flooding, visit: nwaonline.com/428nwaflooding2/