James Hales: Daisy BB Guns changed the fortunes of Rogers, then and now 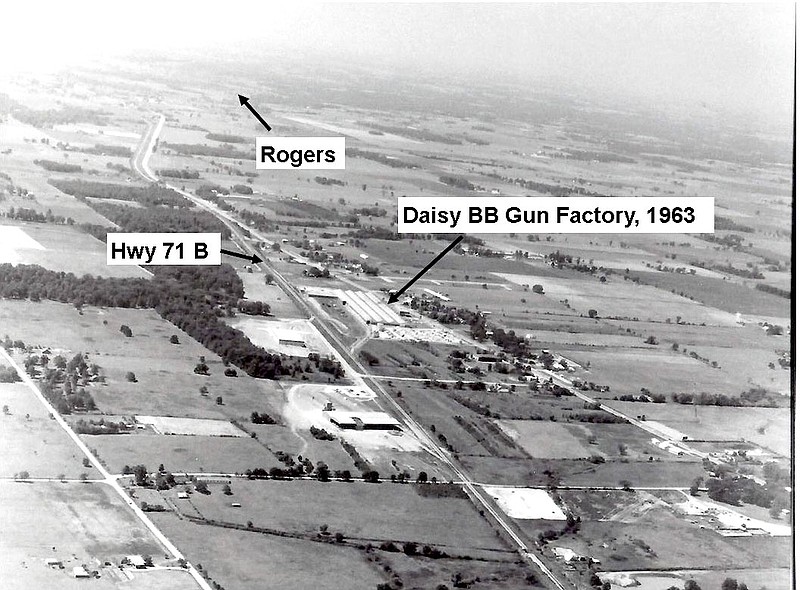 Aerial photo of Daisy Plant June 28, 1963. The factory and offices were on U.S 71S a few blocks south of New Hope Road. Rogers is at the far top left of the picture. Notice how far out in the country Daisy was in 1963. (Courtesy photo/Rogers Historical Museum)

Most of the folks who grew up in Rogers know the story of Daisy BB Guns and the company's influence on our history and development. However, many youngsters and newcomers have no idea of the importance of this company and the "family" of Daisy folks who were, and are, major contributors to making our town the great city it is today.

Until the late 1950s, there was very little industry in Rogers except farming, and the entire business community was concentrated in a five block area downtown. The population had remained fairly constant at about 3,500 for the previous 30 years, and then in 1958 something happened that changed the city forever.

The local construction firm of Garner & Larimore built a huge facility south of Rogers at 2111 S. Eighth St. (U.S. 71S) to house the manufacturing company. In 1958, Daisy moved the entire plant, lock, stock, and barrel with about 60 key personnel and their families, to Rogers. The move took 38 train cars and 71 truck loads to move the machinery and raw materials for the new plant. It was almost miraculous that the move was completed and the company was back in business in a scant six months. The first BB gun was produced in Rogers on June 26, 1958.

Daisy initially provided 500 good-paying jobs for the people of Rogers, and this number soon grew to about 1,000. Its success attracted other major industry, and in the 1960s several major companies located here.

A column by Charlotte Horvath described the phenomenon in the January 2012 Friendly Note, the newsletter of the Friends of the Rogers Historical Museum: "Yes, the city of Rogers declared, the manufacturing door opened. Fifteen new major industries were announced as considering making a move to this area, according to the Rogers Area Chamber of Commerce in 1957. What more can be said? Thank you, Daisy, for selecting Rogers, Ark."

The new plant drew considerable interest from locals and visitors alike. Many folks had heard of Rogers because they knew that was where the Daisy BB guns were made. Another column by Charlotte Horvath in the Friendly Note pointed out how they handled the many visitors: "There were days when the main entry to the plant was filled with folks and resembled a theater waiting line. Tours of the facility were offered to many groups including teachers, business owners, and families of employees. Tourists dropped in by the bus loads. The service department provided the original guides for tours. Later Ruth Papini was the supervisor of the college students who were hired as guides for visitors. Ruth also wrote a column in the Daisy Aim newsletter and had a program about Daisy on KURM radio. A quote from Ruth, who always had a chuckle: 'A psychiatrist is a person who, if you are going crazy, helps you.'"

The president of Daisy wasted no time getting involved in his new hometown. Cass Hough contributed his time and money to the people of Rogers including the Rogers Memorial Hospital and city library. Until 1964, the Rogers Public Library was a room in the City Hall on Elm Street, but Hough donated more than $100,000 to renovate the old post office on Poplar into a modern library. The dedication of the Rogers-Hough Memorial Library in 1964 was a major event for Rogers. Hough's wife, Beth, was also involved in the evolution of Rogers by founding the Friends of the Rogers Museum in 1975 to support the newly created Rogers Historical Museum.

So, who was this man, Cass Hough? According to those who knew him, he was almost a larger-than-life person – a war hero, businessman, statesman, expert pilot, and friend to thousands of Daisy employees. His two main loves in life were flying and Daisy.

Cass Hough was a hero long before Daisy came to Rogers. At the beginning of World War II, Hough served for 38 months as a colonel and director of technical operations with the Eighth Air Force based in England. Hough broke the sound barrier in an American-built P-38 Lightning – the first such feat in the history of mankind. At the time, the P-38 was a new, untested aircraft and deemed unworthy to compete with the English and German fighter planes. Col. Hough believed in the plane. However, an experienced test pilot was killed while putting one of the new Lightnings through a vertical power dive. When he tried to pull out, the wings came off. A second pilot was also unsuccessful pulling out of the power dive and bailed out but was seriously injured.

Col. Hough and his engineers made some changes, and Hough personally flew the plane in a death dive where seven tons of airplane were hurled from 43,000 feet straight down toward the earth at full throttle. The P-38 reached 800 miles per hour, faster than any human being had ever traveled before. The plane successfully pulled out of the dive, and this time the wings stayed on. The P-38 became the dominant fighter super weapon of World War II and played a large part in the Allied victory. (Excerpts from a story by Frances Drake, Feb. 1944, Readers Digest)

That was the kind of man that led Daisy to great accomplishments from 1959 until his retirement in 1976. After Cass Hough's retirement, Daisy was owned by larger corporations that funneled the air gun profits into other divisions. For the first time in 96 years, Daisy lost money. Hough became concerned, and in 1983 assembled a group of investors who bought Daisy back. The announcement that the ownership of Daisy was returned to Rogers brought long and loud applause from Daisy executives and machine operators alike. Cass Hough died at the age of 85 in 1990. (Excerpts from the History of Benton County, Benton County Heritage Committee, Rogers 1991)

In 1993, Charter Oak Partners, a Connecticut investment group, purchased Daisy and operated it for the next 23 years.

By 1997, it had become more profitable to purchase components from specialized manufacturers than to produce them in Rogers. The site on U.S. 71S had become an assembly facility, and the huge complex was no longer needed. Daisy Manufacturing did the unthinkable for the people of Rogers – they sold the property and the assembly process was moved to an underground facility in Neosho, Mo. The home office was retained in Rogers.

In March, 2000, Arkansas First Lady Janet Huckabee shot a balloon tied in the middle of a ribbon to officially mark the opening of the Daisy Airgun Museum in the 1906 Bank of Rogers building at 114 S. First St. The museum is an independent non-profit devoted to preserving and promoting vintage products and artifacts of the historic Daisy Company.

On Oct. 25, 2004, the Daisy Museum relocated to the southwest corner of Second and Walnut streets, in the former Rexall Drug building dating to 1886. (Data from the Daisy Airgun Museum Web site)

On Jan. 19, 2021, the world's largest BB gun, a 25-foot tall Red Ryder, was installed on the sidewalk leaning against the museum. According to Ray Hobbs, owner of the building that houses the museum, the gun will attract a lot of traffic downtown to see it and the wonderful museum.

Ray Hobbs was named president, chief executive officer and chairman of the Board of Daisy Outdoor Products in 2001, and in 2007, he brought the entire operation back to Rogers. The headlines of the Morning News on June 21, 2007, proclaimed: Daisy Plant to Return, Air Gun Assembly Site to Relocate from Missouri. In a joint announcement from Ray Hobbs and Gov. Mike Beebe, the Daisy assembly plant will move back to Rogers and be in full production by early August. "We are very thrilled and excited to tell you we are coming back home to Rogers," Hobbs said.

Daisy continued operations at the new facility, 400 W. Stribling Drive, just west of North Second Street, with about 65 employees. On June 26, 2016, big changes came to Daisy when the company was acquired by Gamo Outdoor USA, an affiliate of New York-based private equity investment firm BRS. Keith Higginbotham, president of Gamo Outdoor USA, became the new president of Daisy. On Jan. 18, 2017, Arkansas Gov. Asa Hutchinson and Keith Higginbotham announced that Gamo will be moving its headquarters to Rogers with a major expansion and hiring about 30 new employees.

With all of the new expansion and investment in Rogers, it seems certain that Daisy will continue to be a major part of Rogers for many years to come. 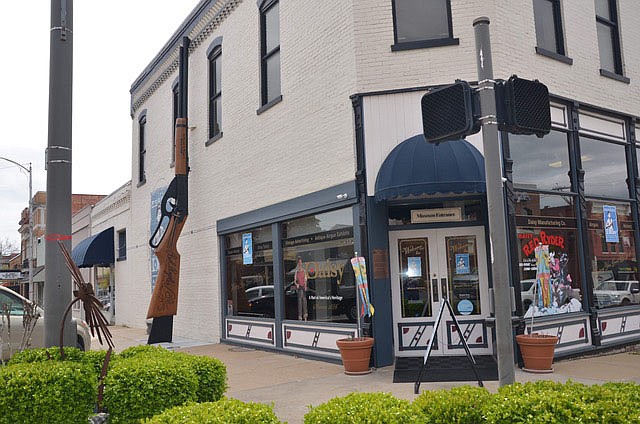