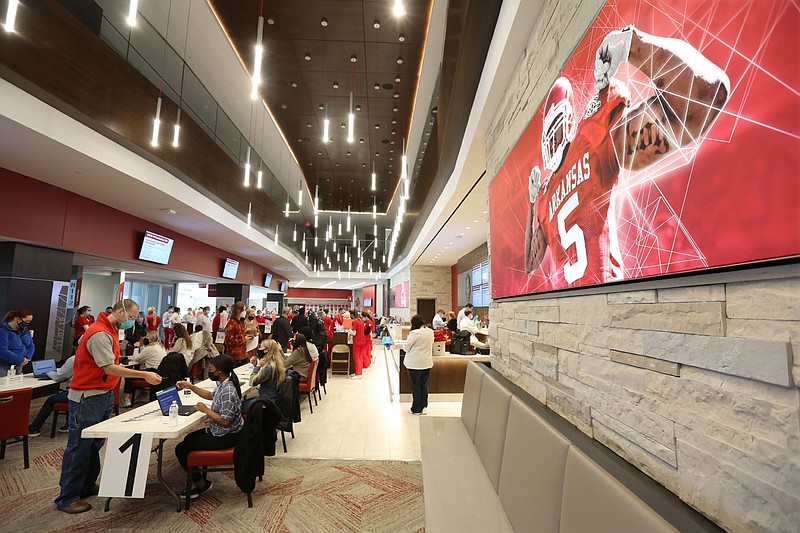 Students and members of the general public join the queue to receive a covid-19 vaccination April 1 during a clinic hosted by the Northwest Arkansas Council in collaboration with the region's health care systems at Donald W. Reynolds Razorback Stadium at the University of Arkansas in Fayetteville. The city's public health officer recommended on Wednesday students and residents alike get a second shot wherever they can, not just where they got the first shot. (File photo/NWA Democrat-Gazette/David Gottschalk)

FAYETTEVILLE -- Students who only receive a first covid-19 vaccine shot on campus should still get one, even if it means they receive a second shot in another state, the city Board of Health discussed Wednesday.

The board of mostly local health professionals met in a hybrid format, with some members online on Zoom and some in person at the Fayetteville Public Library's event center.

Dead Day at the University of Arkansas is Friday. The university's Pat Walker Health Center has access to the Pfizer and Johnson & Johnson vaccines, said Board Member Huda Sharaf, the center's director.

The university had given about 4,000 Johnson & Johnson shots before a national pause April 13 in the single-dose vaccine, Sharaf said. The university ordered about 100 first-dose Pfizer shots and administered about half of them in the past week or so, she said.

Both vaccines will continue to be available at the university, Sharaf said.

"We still want to be a source of vaccine for anybody on campus who wants it and hasn't gotten it yet," she said.

The center's number of doses only reflects on-campus shots, and the number of students receiving a shot off campus is likely far greater, according to a center spokesman. The health center will resume Johnson & Johnson shots Monday. The national pause was lifted Friday after the CDC determined the shot's benefits far outweighed the risk of extremely rare blood clotting found in 15 out of nearly 8 million people.

Marti Sharkey, the city's public health officer, emphasized students and residents alike don't have to get their second shot at the same place they got their first because of the wide availability of vaccine. The CDC recommends a second Pfizer dose three weeks after a first dose, and four weeks for the Moderna shot.

Soon, the recommendation for Pfizer could change to 12 and older, Sharkey said. A preliminary plan is to make the shot available at schools in the city, even though it will be summer break for students, she said.

School nurses are only contracted to work when school is in session, so clinicians likely will need to volunteer to administer shots, Sharkey said. The Board of Health is ready to help coordinate that effort, as well as assist pharmacies in handling the extra load of thousands of shot-eligible children, she said.

As of Wednesday, Benton and Washington counties had 71 new cases of covid-19.

•There were 20 patients admitted to covid-19 units at Northwest Arkansas hospitals.