AGFC relies on anglers for data 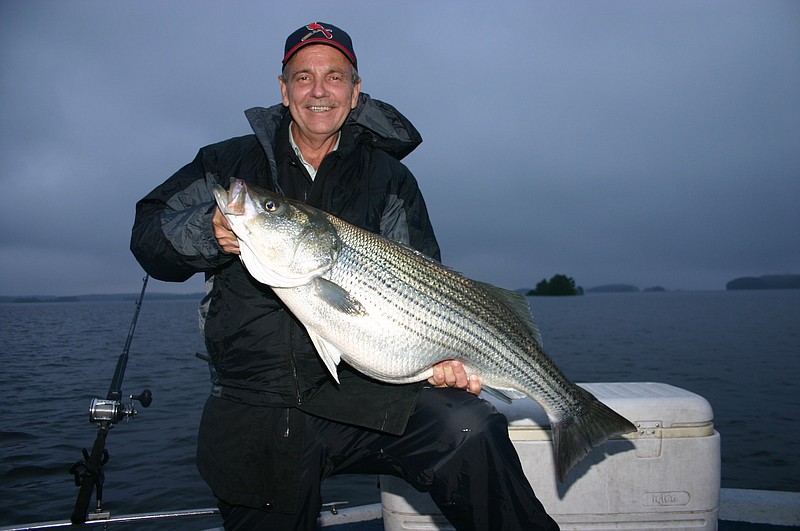 Officials with the Arkansas Game and Fish Commission are concerned about not only large stripers, like the one above, but also smaller ones as there have been a lack of both classes among angler reports. (Arkansas Democrat-Gazette/Bryan Hendricks)

While important, those elements result from extensive data from anglers and from survey samples taken from netting and electrofishing exercises.

All of the participants were avid striper anglers, including John T. Hall and David Cochran, both prominent striper guides on Lake Ouachita. The group also included Bobby McGehee, dean of graduate studies at the University of Arkansas for Medical Sciences. McGehee is an avid recreational striper angler who is known as "Fish Doctor" among the big lake's striped bass fishing fraternity.

All of the anglers were concerned about the lack of big stripers for which Lake Ouachita is famous. Their concerns are significant because stripers are the second most popular fish among anglers at Lake Ouachita behind largemouth bass, Hobbs said.

Despite the striper's popularity, Lusk expressed mild frustration that only three anglers participated in a three-year program to record catch data in diaries. A diary entry records the name of the lake, the date of a fishing trip, the number of anglers and the number of lines used, the time a trip started and ended, and the number and size of stripers caught.

The program's goal, Lusk said, is to obtain a sample size of 500 stripers. The objective is to determine how many stripers were longer than 35 inches and also to determine the catch rate per hour.

Lusk contrasted the lack of participation to Beaver Lake in Northwest Arkansas, where many anglers contribute catch data. However, the sparse data clearly show that anglers are catching decreasingly fewer big stripers at Lake Ouachita. In 2018, for example, 7% of fish recorded were longer than 35 inches. In 2020, only 4% were longer than 35 inches.

Even more concerning is the apparent lack of small stripers.

"Smaller fish grow to be bigger fish," Lusk said. "If you're not seeing small fish, that is concerning."

Lusk and Hobbs broached the idea of putting a big cooler in a known location, such as a popular convenience store that anglers frequent. Anglers could leave their striper carcasses in the cooler after filleting them. Biologists could measure the carcasses and determine their age by examining a bone in the head called an otolith.

"Anytime a fish is put in a trash can, that's the loss of a lot of good data," Lusk said.

Hobbs said that the Game and Fish Commission intends to embed tags onto 200 stripers. The tags carry a $50 reward, which encourages anglers to report catching those fish.

The commission stocks half of its striper fingerlings near Arkansas 27 and half at Denby Point, Hobbs said. Those areas have stained water and cover that reduce the ability of predators to find and eat the fingerlings.

"We don't stock them at Brady Mountain in that clear water," Hobbs said. "That makes them susceptible to predation. Our strategy is to enhance survival. Once they grow to a larger size, they migrate to the east end of the lake in the heat of summer to find thermal refuge. They get transitional, but they have to have a good place to grow and get a start."

Naturally, there was some discussion about conflicts between striped bass anglers and largemouth bass anglers. Lusk and Hobbs said that the science clearly shows that stripers, especially at current stocking levels, are not detrimental to largemouth populations.

"The number of stripers being stocked has virtually no impact on the black bass fishery," Hobbs said. "The main driver for black bass productivity is the vegetation that's popping up around the lake."

Lusk described a visual graph that represented the interaction between game fish and Lake Ouachita's forage base. He said that game fish populations -- including stripers, largemouths and walleyes -- were well within the sustainability threshold for the lake's forage base, which is primarily shad.

The angler conflict, which hit its zenith in 2006, changed the Game and Fish Commission's methodology for stocking stripers, Hobbs said, but it did not change the actual number of stripers that biologists release into the lake. Driving that controversy, Hobbs said, was the myth that stripers eat a lot of bass.

"A lot of people that are worried about stripers eating bass ought to be more concerned about a bass eating a bass," Hobbs said.

One angler asked why the Game and Fish Commission stocks stripers so aggressively in Lake Norfork, which is considerably smaller and more remote than Lake Ouachita.

The Game and Fish Commission is reviewing stocking strategies at Lake Ouachita, Hobbs said. There have been major fish die-offs annually at Lake Norfork for the past 10 years. Summer die-offs were the reason why the commission terminated its striper program at Lake Greeson.

"Hybrids would do better in that system [Lake Norfork]," Hobbs said.

The commission also terminated its hybrid stocking program at Greers Ferry Lake, but it remains very popular and successful at DeGray Lake.

Crappie, which trail striped bass in popularity at Lake Ouachita, got some attention at the meeting. One participant noted that anglers are catching a lot of small crappie, but not many big ones this year.

That phenomenon is common on big reservoirs, Hobbs said. On small reservoirs such as Lake Conway, the system is very fertile and stable, with excellent reproduction and recruitment every year.

Big reservoirs, such as lakes Ouachita and Hamilton, are much more variable. Crappie often have a great year of reproduction and recruitment followed by several years of poor recruitment.

"You have gaps in year classes," Hobbs said. "At the Wally Marshall [crappie] tournament they had a couple of years ago, almost all of the fish they weighed in traced back to one year class."