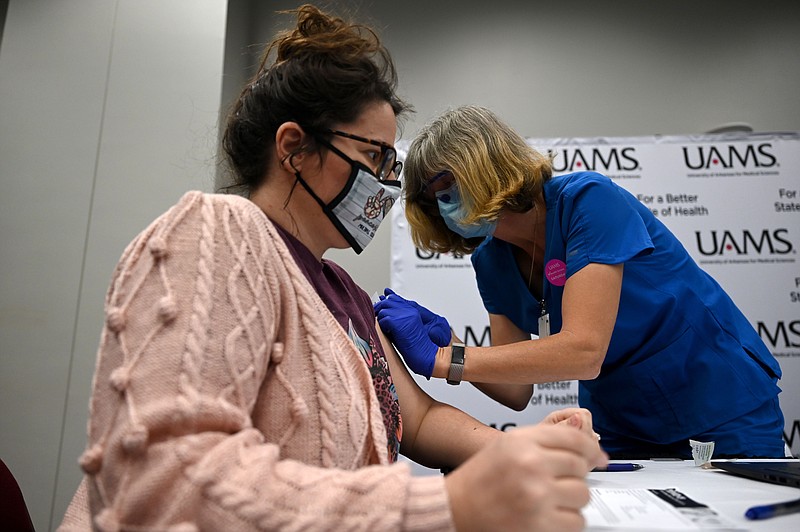 The pace of coronavirus vaccinations in Arkansas continued to show signs of slowing on Wednesday as the state's count of cases rose by 291.

The increase in cases was the first one in four days that was smaller than the one a week earlier.

After falling by 13 on Tuesday, the number of people hospitalized in the state with covid-19 rose Wednesday by eight, to 165.

The state's death toll from the virus, as tracked by the Department of Health, rose by one, to 5,726.

In a statement, Gov. Asa Hutchinson also noted that the 1,904 cases in the state that were considered active, while up from the previous day, was down from the 1,943 that were active the previous Wednesday.

"Our vaccination efforts continue as we have doses of all three vaccines available in every county. These vaccines are safe, effective, and offer us the best path forward toward the end of this pandemic.”

According to the Health Department, the total number of vaccine doses that have been administered in the state, including second doses of the Pfizer and Moderna vaccines, grew Wednesday by 18,224.

That was down by almost 2,500 doses from the daily increase a week earlier.

The average number of doses administered each day over a rolling seven-day period fell by about 350, to just over 14,440.

That average has mostly fallen since peaking at about 23,000 a day during the week ending April 7.

Wednesday's increase in cases was larger than the one a day earlier but fell short of the spike of 352 cases on the previous Wednesday, April 21.

As a result, the average number of cases added to the state's tallies over a rolling seven-day period fell to 175, the lowest level since April 14.

The number of covid-19 patients who were on ventilators rose by one, to 27.