RECIPES: The secret to smooth dough and fluffy bread is already at hand 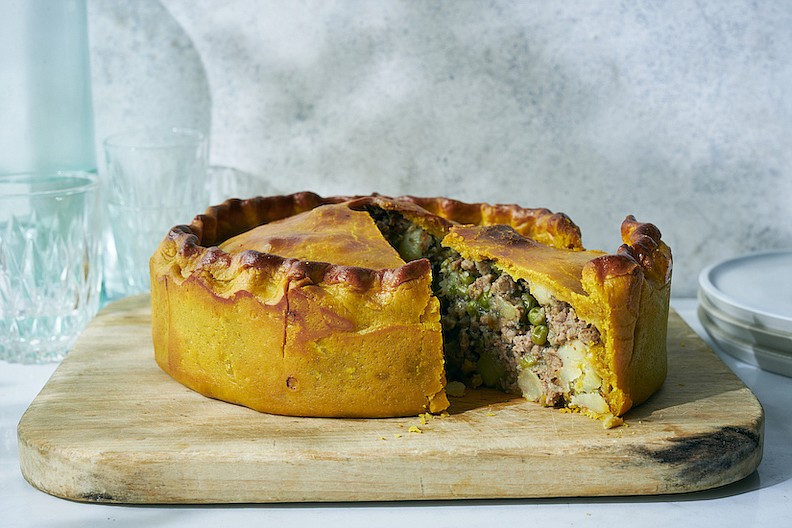 Food personality Nadiya Hussain riffs on a classic Victorian-era hot water pastry crust for the base of her turmeric-rich Samosa Pie. (The New York Times/David Malosh)

If there's a quintessential dish from chef Nadiya Hussain — the "Great British Baking Show" winner who has since found huge success — it's probably the samosa pie with the turmeric crust from the very first episode of her solo cooking show "Nadiya's Family Favourites."

Meant to be unmolded for maximum impact, the pie stands impossibly tall and doesn't crumble, even when sliced. Hussain likes to wrap the whole golden thing in parchment paper and take it to picnics, passing out fat, perfect wedges to family and friends.

Luckily, the trick to it — an old-fashioned British pie crust Hussain makes with flour, shortening and water at a boil — is just as easy.

Hussain appreciates how simply you can roll out the still-warm dough. "I really love a hot water pastry crust," she said. "It is one of my favorite doughs to work with."

Hot water might not seem like the most exciting ingredient, but understanding how and when to use it can transform the way we cook and bake. Found in baked goods across the world — tortillas, milk bread, cornbread and cream puffs, to name but four — hot water can speed mixing time; make it easier to fill and form doughs; yield softer, fluffier breads; and create stunning pie crusts like Hussain's. Best of all, it's readily available.

Some of the science behind these benefits is straightforward: Heat increases the speed at which flour absorbs liquid and results in a smoother dough with less resting or kneading time.

But something even more magical happens when water and flour combine at higher temperatures, said Dan Souza, the editor of Cook's Illustrated and a host of the show "America's Test Kitchen."

When you heat a wet starch above 140 degrees (say, as when mixing flour, which is mainly starch, with boiling water), the starch granules begin to swell quickly into a meshlike network that traps water in the dough even as it cooks, Souza said.

This process is called gelatinization. It makes a dough easier to mix and roll out with very little rest time or kneading — in fact, the dough is almost immediately smooth and supple. The gelling helps the dough stay soft but strong and sturdy after it is cooked, too.

Gelatinization is what happens when you use boiling water to make the silky, supple dumpling doughs used all over Europe and Asia. It's a part of French pate a choux, where water and flour are cooked together to form the foundational pastry for cream puffs and gougeres. It is also the process behind tangzhong, the Chinese method of making a soft, yeasted milk bread, which uses a similar flour-and-water roux. (You add the yeast after the heated flour mixture has cooled.)

Gelatinization can also be used to bind breads made with flour that doesn't contain gluten, Souza said, like tapioca or cornmeal. It's even an added benefit of nixtamalization, the process of simmering dried corn kernels in an alkaline solution to prepare them for grinding and mixing into masa.

You sometimes see the same approach with flour tortillas made across the Southwest, said Freddie Bitsoie, a Navajo chef from Arizona who led the restaurant at the Smithsonian National Museum of the American Indian until it closed during the coronavirus pandemic. When made with boiling water, they're softer and fluffier, he said.

His mother always made flour tortillas with water just warm to the touch, he said, but his sister now uses boiling water for tortillas. She picked up the technique from her in-laws in neighboring New Mexico, Bitsoie said, where some cooks also use it in the masa for corn tortillas or tamales.

Anita Jaisinghani, the chef and an owner of Pondicheri and Bake Lab + Shop in Houston, also learned to use hot water in baking while she was growing up and still uses it in nearly everything she bakes.

Jaisinghani makes flatbreads, tea cakes and savory quick breads with a mix of spices, grated vegetables and dried fruits, as well as flours like buckwheat, chickpea or cornmeal.

Hot water helps hydrate the coarse flours and dried fruits, she said, or diffuse flavors and colors from grated beets or ground turmeric, which is what gives Hussain's beautiful golden pie crust its distinctive hue.

Jaisinghani doesn't like the change in texture that comes with boiling water, she said, but she does enjoy all the other benefits. That's why she usually uses water that is roughly 120 degrees.

Over the years, Jaisinghani has noticed that hot water also makes her baked goods just a little fluffier because it speeds up the reaction time of chemical leaveners like baking soda or baking powder. With hot water, she said, there's a bit more lift happening as you slide them into the oven.

Jaisinghani was a microbiologist before she became a restaurateur but says a lot of these science-based techniques were what she was taught as a child in India.

"Most of this never made sense to me until I figured out the why," she said.

Make the filling: Heat the oil in a large skillet over medium heat. Add the onion and 1 ½ teaspoons salt and cook, stirring occasionally, until the onion is soft and translucent, about 5 minutes. Stir in the ginger, garlic, cumin and red-pepper flakes, and cook until fragrant, 1 to 2 minutes. Add the lamb and cook, stirring occasionally and breaking into small pieces, until it is just cooked through, 6 to 8 minutes. Stir in the potatoes, cover, reduce the heat to medium-low and let everything steam, stirring once halfway through until the potatoes are just soft, about 20 minutes.

Uncover, stir in the peas and cook until just heated through, 1 to 2 minutes. Stir in the cornstarch slurry, then turn off the heat and stir in the cilantro. Season to taste with salt and let cool completely before building the pie.

When the filling has cooled, arrange an oven rack in the lowest position and heat oven to 400 degrees.

Make the pastry: Whisk the flour(s), salt and turmeric in a large heat-safe mixing bowl. Create a small well in the center.

In a small pot, bring 2/3 cup PLUS 1 tablespoon water and the shortening to a boil over medium heat. As soon as the shortening has melted completely into the boiling water, pour the mixture into the well in the flour. Use a wooden spoon to quickly stir the hot water into the flour, making sure everything gets wet. As soon as it is cool enough to handle, knead the dough with your hands in the bowl or on a clean work surface until it comes together in a smooth ball.

Wrap a third of the dough in plastic wrap and set aside. Roll the remaining dough into an 11-inch circle (about 1/8-inch thick) between two large pieces of plastic wrap or parchment paper. Remove one piece of wrap or paper and flip the pastry into an 8-inch springform pan, centering it and using your hands to gently press it into the bottom and against the sides. The dough should be supple and smooth enough that, if you tear it, you can easily patch any holes. Discard the wrap or paper. Add the filling and use the back of a spoon to press it in and level the surface. There should be a ½-inch rim of dough above the filling. Brush it with the beaten egg.

Roll the reserved dough into a 9-inch circle (about 1/8-inch thick) between two pieces of plastic wrap or parchment paper. Remove one piece of wrap or paper and flip the pastry over the filling, centering it and pushing it down so that it fits snugly. The edge of the top crust will overlap the edge of the bottom crust. Press these two edges together gently against the side of the pan. Using a knife, trim the top of the combined edges to create an even border around the pan, then use your fingers to crimp that bit of dough back down into the pie, sealing the edges.

Cut a hole in the center of the pie to allow air to escape, brush the top with egg and bake until the top is deep golden brown and firm, 60 to 75 minutes, rotating the pan halfway through. Let cool in the pan on a rack for at least

1 ½ hours before unmolding and serving.

Recipe from Nadiya Hussain and adapted by Rachel Wharton 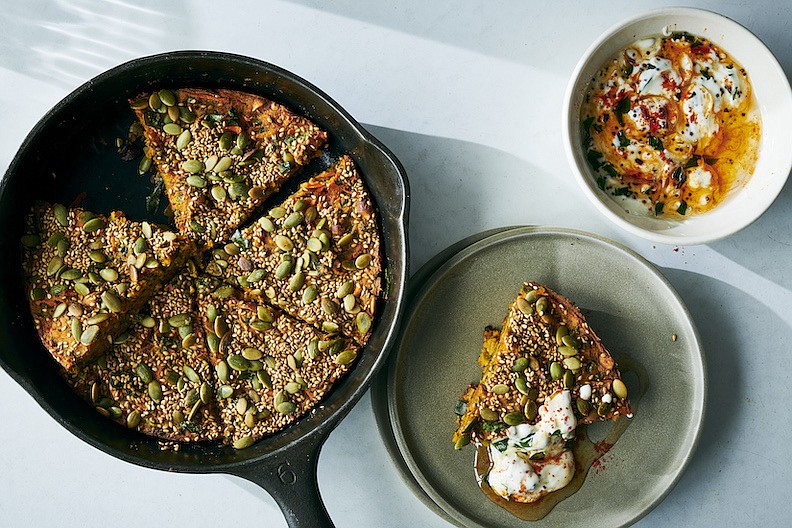 Arrange an oven rack in the lowest position and heat oven to 350 degrees.

Make the handvo: In a large (10-inch) cast-iron or nonstick oven-safe skillet, heat the vegetable oil over medium-high. When the oil begins to shimmer but is not yet smoking, add the peanuts and fry, stirring continuously, until they begin to take on color and toast, 1 to 2 minutes. Immediately add the cumin seeds, stirring just until they begin to pop and sizzle, about 10 seconds, then immediately stir in the curry leaves and turn off the heat. (Be careful as the curry leaves will spatter.) Scrape into a large bowl. Reserve the skillet, but don't clean it.

To the bowl, add the carrots, semolina, fenugreek, cilantro, yogurt, chickpea flour (if using), ginger, salt, baking powder, chile powder, turmeric and baking soda. Stir until well mixed. Run the hot water tap until the water is hot (120 degrees) and measure out 1 cup. (Or heat 1 cup water to about 120 degrees in a small pot or kettle.) Add to the semolina-carrot mixture and stir until everything is evenly mixed. Immediately pour it into the skillet you used to toast the spices in the oil. Sprinkle the sesame seeds and the pumpkin seeds, if using, over the top.

Bake until the sides pull back a little from the edges and the center is set, 40 to 45 minutes. It is better to overbake rather than underbake to achieve a crisp crust. Cool in the pan on a rack for 10 to 15 minutes.

In a small bowl, stir together the yogurt, sugar and salt. Set this aside and, in a small skillet, heat the oil over medium-high to high. When the oil begins to shimmer but is not yet smoking, add the garlic. Stirring constantly, cook it just until the edges turn golden brown, about 1 minute, then immediately add the mustard seeds and chopped curry leaves, and remove the pan from the heat. Carefully pour the oil into the seasoned yogurt, leaving a few teaspoons of the spices and herbs in the pan, and fold the oil and yogurt together. Sprinkle the reserved spices and herbs and the chile powder over the top.

If the edges of the handvo are stuck to the skillet, use a spatula to release the sides. Flip the handvo out of the pan or, to serve it with the seeds on top, gently slide it onto a serving plate using a large spatula. Cut into slices or squares and serve warm or at room temperature with the yogurt sauce.

Recipe from Anita Jaisinghani and adapted by Rachel Wharton