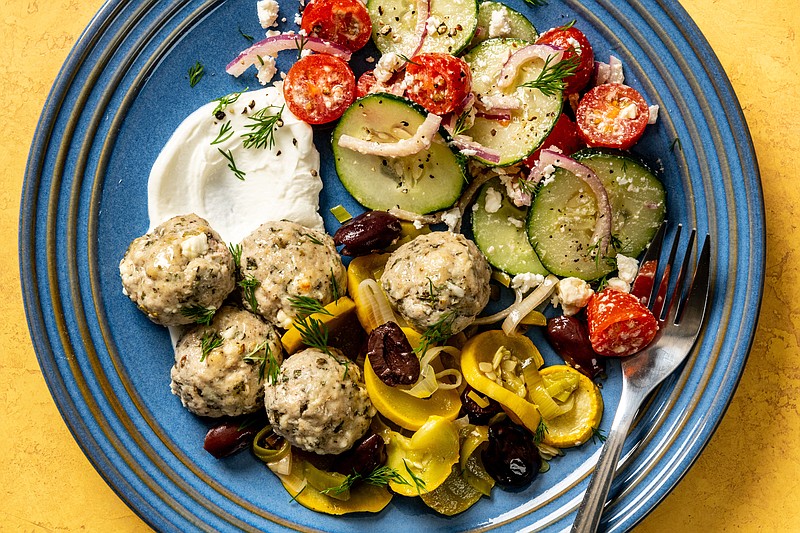 I don't follow a strictly "Mediterranean Diet," but if I ever decide to, it would not be much of a sacrifice. I love all of the flavors and foods associated with that style of eating. And it is no problem for me to make the meat play a supporting role on my plate.

When I saw a recipe for chicken meatloaf that called for feta cheese, fresh mint, leeks, squash and kalamata olives, and suggested serving all of that alongside a Greek salad, I knew I had to try it. And then, of course, tweak it.

I added a bit of Greek yogurt, minced garlic and dried oregano, and turned that meatloaf into meatballs. The feta cheese and yogurt give these meatballs a tangy flavor and keep them moist.

They come together quickly and bake in about 15 minutes, sharing a rimmed baking sheet with the sliced squash, leeks and halved olives.

While the meatballs are in the oven, you have just enough time to whip up a Greek salad of greens, red onion, tomato and, if you like, another little sprinkle of feta in your homemade vinaigrette.

Position a rack in the middle of the oven and heat to 450 degrees. Lightly oil a large, rimmed baking sheet.

In a large bowl, combine the chicken, feta, yogurt, mint, garlic, oregano, pepper and allspice. Form the mixture into 16 equal-size meatballs, just under 1 ½-ounce each, and place in the center of the prepared baking sheet.

In another large bowl, gently toss together the squash, leek, olives and 1 tablespoon of olive oil until everything is coated. Arrange the vegetables around the meatballs and transfer to the oven. Roast for about 20 minutes, or until the meatballs reach an internal temperature of 160 to 165 degrees.

While the meatballs are cooking, in a large serving bowl, combine the tomatoes, cucumber, feta and red onion. In a small bowl, whisk together the olive oil, vinegar, oregano and mustard. Pour the dressing over the salad, lightly toss to combine, and sprinkle with a few mint leaves. Taste, and season with salt, pepper and more feta, if needed.

To serve, smear a heaping tablespoon of Greek yogurt on the plate and place the meatballs and squash partially on top of the yogurt. Spoon the salad next to the meatballs.

Adapted from "Chicken!" by the editors of Good Housekeeping (Hearst Books, 2019).