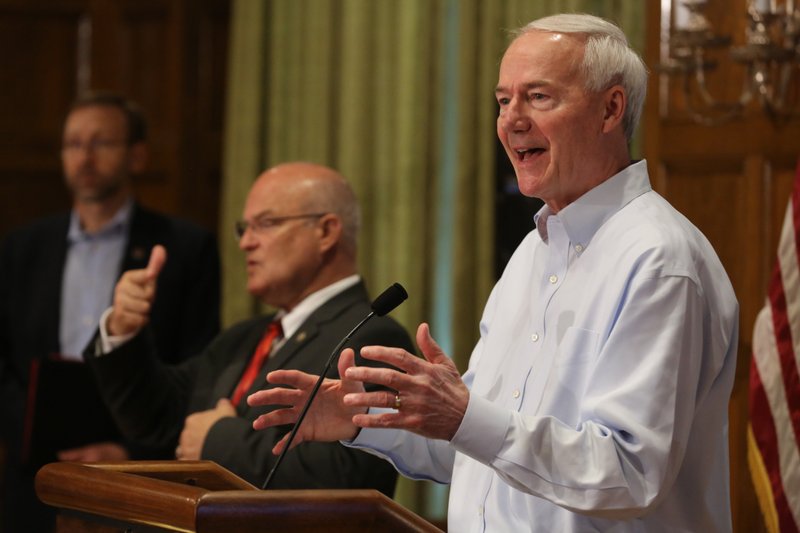 FILE -- Gov. Asa Hutchinson (right) answers a question during the daily covid-19 briefing on Saturday, May 23, 2020, at the state Capitol in Little Rock. (Arkansas Democrat-Gazette/Thomas Metthe)

Despite the resumption of immunizations using Johnson & Johnson's one-dose coronavirus vaccine in Arkansas, the overall pace of vaccinations continued to slow on Tuesday as Gov. Asa Hutchinson called on employers, primary care doctors, and schools to help with the effort.

The Republican governor said he wants to make it as easy as possible for people to get the shots.

"I’d like to see a vaccine clinic made available at [an Arkansas] Travelers baseball game," Hutchinson said.

"I’d like to see it at the malls that are available. I would like to see it more available at the schools and challenged [Education] Secretary [Johnny] Key to continue to encourage our schools to vaccinate [ages] 16-plus, and soon it will be even down from there age-wise."

According to the Health Department, the number of vaccine doses that have been administered in the state, including second doses of the Pfizer and Moderna vaccines, grew Tuesday by 15,170.

That was down by more than 4,400 doses from the daily increase a week earlier.

The average number of doses administered each day over a rolling seven-day period fell to just under 14,800, dropping below 15,000 for the first time since the week ending March 11.

Meanwhile, the state's count of virus cases rose by 229, the third daily increase in a row that was larger than the one a week earlier.

After rising for the previous two days, the number of people hospitalized in the state with covid-19 fell by 13, to 157.

The state's death toll from the virus, as tracked by the Department of Health, rose by five, to 5,725.

At his weekly news conference on the pandemic, Hutchinson said employers should educate workers about the importance of getting vaccinated and give them time off to do it.

Employers can also help by having a vaccine clinic at the workplace or giving employees the opportunity to go to a pharmacy to get the shots, he said.

He said physicians in outpatients clinics have "a growing supply of vaccines" and are "a trusted provider."

"That’s who a patient is used to going to, and they will be there to guide whoever their patient is to the right place to get the vaccine," Hutchinson said.

The increase in the state's case count on Tuesday was larger by 31 than the one a week earlier.

As a result, the average number of cases added to the state's tallies over a rolling seven-day period rose to 184, its highest level since Wednesday.

The total number of coronavirus cases reported in Arkansas remained at 334,769 Tuesday morning, according to a state website. The death toll remained at 5,720.

A total of 1,646,751 vaccine doses have been administered, the website states.

[Video not showing up above? Click here to view » https://www.youtube.com/watch?v=unz1y_JktNk]