Prize fish almost one that got away 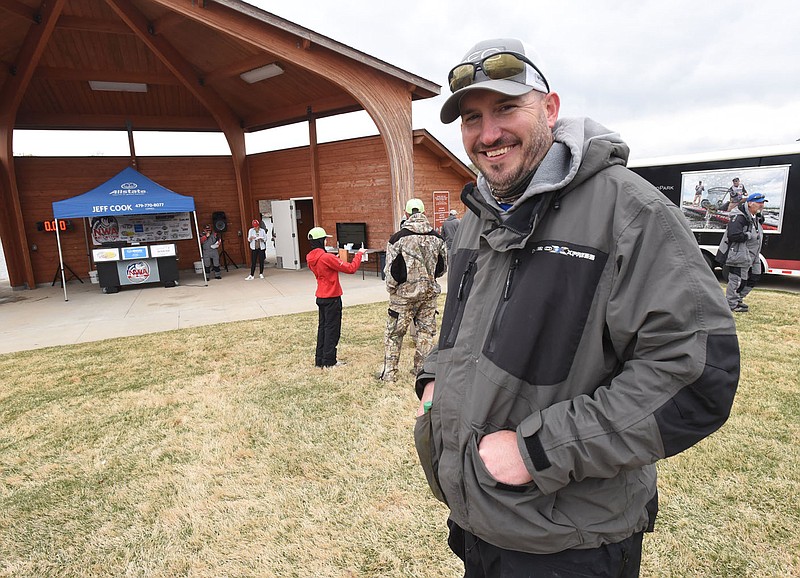 Odds were in the fish's favor when Tyler Hickman of Lowell hooked into a whale of a bass worth $5,000 during the ninth annual Pagnozzi Parker Charities Big Bass Tournament at Beaver Lake.

When the fishing was over and the last bass was weighed during the April 17 contest, Hickman folded the $5,000 winning check into his coat pocket. He happily posed for pictures grinning earlobe to earlobe with a fine souvenir trophy.

But it almost didn't happen.

The 5.85-pound largemouth bass Hickman hoisted into the boat could've given him the slip.

Hickman and his buddy, Jacob Meckem of Lowell, were far up the War Eagle River tributary of the lake. It's one of their favorite bass fishing haunts.

Meckem had his eye on a particular point for a cast not far from the Sidewalk Hole boat ramp. That's when the trouble started.

"My line got caught up in the propeller of the trolling motor," Meckem said. While he undid the tangle, Hickman fired a cast of his Rebel Pop R top-water lure, rocketing the plug to the spot Meckem had in mind.

The Pop R splashed down and all heck broke loose in a blast of spray when the big bass tried to destroy Hickman's prized lure.

The strike was so hard, "I just dropped everything I was doing right there," Meckem said, so he could help Hickman land the lunker.

Meckem grabbed the landing net while Hickman eased the big bass toward the side of the boat. The fish hit hard, but didn't fight that hard, Hickman noted.

"Then the handle came off the net," Meckem said. "I had to hold it and just scoop it down to get the bass in there."

A tangle in the trolling motor and broken net were two strikes that favored the bass, but the two friends hit a home run when they lifted the big fish into the boat.

A 5.85-pound largemouth is a trophy for any fisherman, especially caught on a top-water lure. The Pop R is Hickman's favorite. It's the plug he used to catch his biggest Beaver Lake bass. That largemouth, caught at Monte Ne, weighed 7 pounds, 2 ounces. It's hanging on Hickman's wall at home.

The big bass format is a great concept for a fishing tournament. It's different from the typical contest where the heaviest catches of five or six fish win the money. At the Pagnozzi big bass event, there are weigh-ins every hour with cash prizes for the first, second and third heaviest bass each hour. Each hourly prize this year was $300 for first, $200 for second and $100 for third. Even a modest bass can be worth $100. The smallest bass in the money this year weighed 2.84 pounds, worth $100.

And it's not just a guy thing.

Entry fee was $60 per angler at this year's event. There's also a youth division that pays real money to young anglers. They're the future of fishing, as tournament Director Shannan Moseley mentioned at the awards ceremony.

Profits from the event help fund outdoor programs for the area's youngsters.

It doesn't take a giant bass to win some folding money in this annual big bass tournament at Beaver Lake. Plan to get in on the fun next spring.