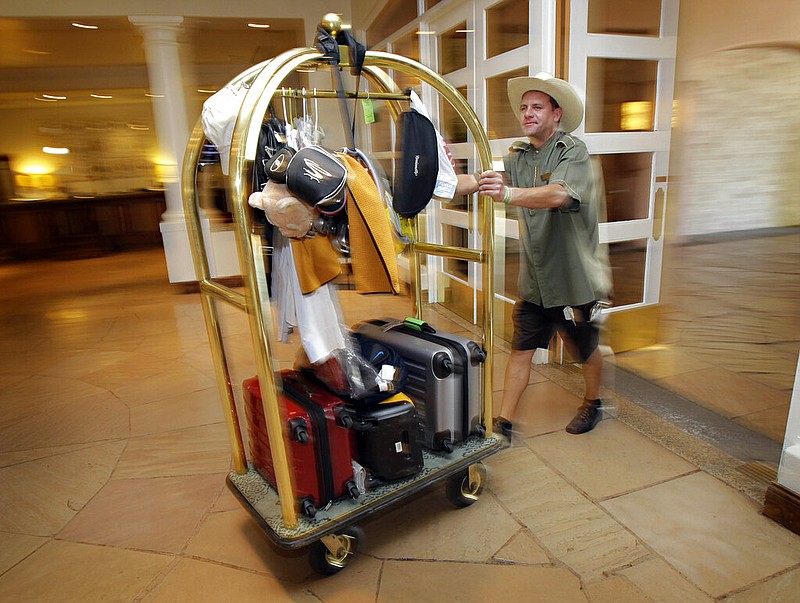 A bellhop transports luggage for guests at a hotel in this October 2010 file photo. (AP/Matt York)

The covid-19 pandemic threw the hotel industry for a loop, but recent stimulus checks and the distribution of vaccines are giving North Little Rock hope for a brighter business outlook this summer.

Stephanie Slagle, marketing director for the North Little Rock Convention and Visitors Bureau, told the Advertising and Promotion Commission during a meeting last week that local hotel managers have seen rising occupancy over the past month.

"We had heard from some of our properties that the stimulus package was one of the reasons they saw a surge," Slagle said in an email Wednesday.

President Joe Biden signed a $1.9 trillion covid-19 relief package in March, which sent direct payments of up to $1,400 to most Americans.

"I know that many of the hotels across the U.S. and in Central Arkansas experienced a surge of customers when the last stimulus check was released and folks had gotten their vaccines," she said.

U.S. hotels reported a 54.6% occupancy for March and the highest levels since the beginning of the pandemic, according to Smith Travel Research statistics.

"Team sports and other gatherings previously restricted by covid-19 were also allowed again after Governor Hutchinson converted those directives to guidances," Slagle said.

Slagle said that historically, North Little Rock hotels have averaged an occupancy rate of 60% to 61% in March.

"With covid-19 cases declining, vaccinations available, restrictions lifted and meetings/events/sports returning, we are optimistic that North Little Rock will soon be following its natural trajectory of occupancy, increasing through the summer months," she said during last week's meeting.

Slagle said local occupancy follows the seasons and that hotels are mostly full during the summer months when there is a lot of activity and leisure travel.

"Typically the peak is in June," she said. "In 2020, the peak was later, most likely due to uncertainty about covid-19 and restrictions on travel.

"The stimulus package may have been a good kickstart, but also the availability of the vaccine and lower number of covid-19 cases will help people feel safer about getting out again for an 'almost' normal summer."

Slagle said she still doesn't believe the city will see any big events this year, but she said enough outdoor sports and smaller group events might help sustain hotels.