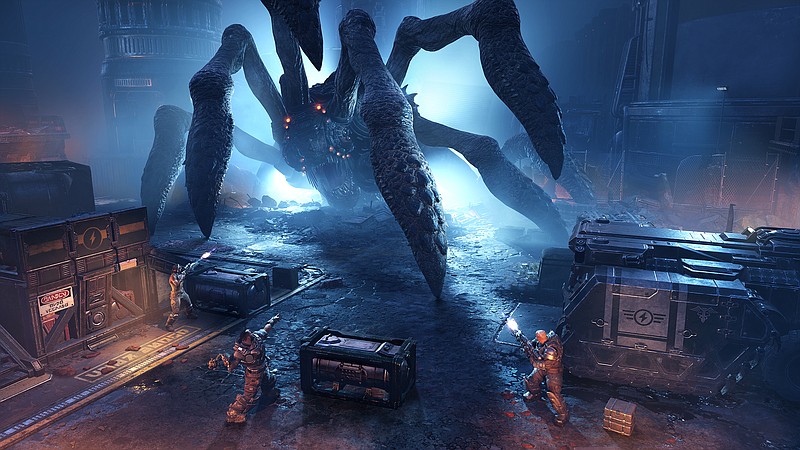 "Gears Tactics" is a turn-based tactics video game developed by Splash Damage in conjunction with The Coalition and published by Xbox Game Studios. It is a spin-off of the "Gears of War" franchise. (Courtesy Xbox Game Studios)

Traditionally a third-person sci-fi action shooter, the "Gears of War" franchise includes more than half a dozen best-selling games, seven novels, comic books and board games, and even a planned feature film. Most of the "Gears" story takes place on the planet Sera and focuses on a war between humans and underground-dwelling creatures known as the Locust that one day emerged from the ground and brought humanity to its knees.

Soldiers, known as Gears, battle to save those humans who remain, although most of the world is now holed up in just a few cities. The "Gears of War" storyline is tragic and spans generations, and is in general quite good. It's rare to see an action-shooter franchise take the horrors of war so seriously, with loss and sacrifice as constant themes.

Also a constant theme — gore — comes thanks in large part to the game's signature weapon, a full-auto assault rifle with a chainsaw bayonet. Said chainsaw can be used to carve enemies into pieces amid a bloody spray. The gore can, thankfully, be toggled off if it becomes too much.

In a shift from other games in the franchise, "Gears Tactics" is a single-player, turn-based game where players take a squad of up to four Gears at a time on missions to combat the Locust horde. The standard "Gears" games relied on squads of players crouched behind cover, using flanking tactics to ambush enemies; and a turn-based adaptation is a perfect fit for the play-style.

Gears spend action points on their turn to move, shoot or use abilities, and certain actions, like executing downed enemies, can boost those action points to keep the squad in the fight and allow it to mow down seriously crazy numbers of enemies. After all Gears action points have been used, the enemy (which often vastly outnumbers the Gears foursome) gets a turn.

Playable characters come in one of five classes, each with its own skill progression tree that allows for extreme customization. For example, the Support class can focus on healing or buffing allies — or dabble in both. Other classes include the Sniper, Heavy, Scout and Vanguard, all with varied skills and roles to play.

Also accompanying the heroes is the flying robot Jack, who can help with tasks and has some limited combat abilities.

As the narrative advances, the Gears soldiers take part in mission after mission, which in a way are like puzzles to solve. The game isn't afraid to throw massive waves of enemies at the player, but unlike the rather frail soldiers in the "X-COM" franchise, Gears are durable and tough to take down. After each mission is complete, soldiers earn experience based on how many enemies they killed and also get random loot to help upgrade weapons and armor. Get enough experience, and they'll level up, which further unlocks the skill tree.

The fundamentals are the same as other "Gears" games: stay behind cover, flank, saw enemies in half whenever possible. But with the addition of skills, the Gears can unleash devastating combo chains of attacks that make a squad of four seem like 40.

"Gears Tactics" borrows a lot from the "X-COM" style of gameplay, including an overwatch ability to shoot enemies when they act during their turns; but there are enough twists and improvements to make "Gears Tactics" a contender for the turn-based crown.

"Tactics" is packed with plenty of the traditional "Gears" flavor, although its narrative-driven storyline means that replayability suffers. And while players can build a roster of Gears soldiers with various abilities to choose from, many missions require the "heroes" of the game to be included, so it's sort of forced onto the player which units to use.

The end of the game isn't quite the end, however. Most players will be about Level 6 or 7 during the final boss battle, but once the game has been beaten, your Gears can go on endless missions, leveling up higher and higher.

Other options are to boost the difficulty level, or to enter Ironman mode, which gives that hardcore experience where all actions are permanent, and if one hero unit dies, it's game over rather than mission restart.

One aspect of "Gears Tactics" that's undeniably better than the "X-COM" series is the boss battles. "Tactics" players will find themselves facing enormous monsters, the size of buildings, and solving the puzzle of how to bring down these massive beasts is pretty rewarding.

The amount of character customization is also pretty impressive, from the extensive skill tree and also the tools and armor a Gear is equipped with.

Overall, "Gears Tactics" looks and feels great, even if the plot railroads the player. Much of the charm is the narrative. The animation, music and art are top-tier, as expected by an AAA studio. Set 12 years before the first "Gears of War" game, the story answers a lot of questions and shows the origins of important figures who appear later in the story.

It's an essential game for fans of the franchise, especially as it serves as an origin story for those important characters.