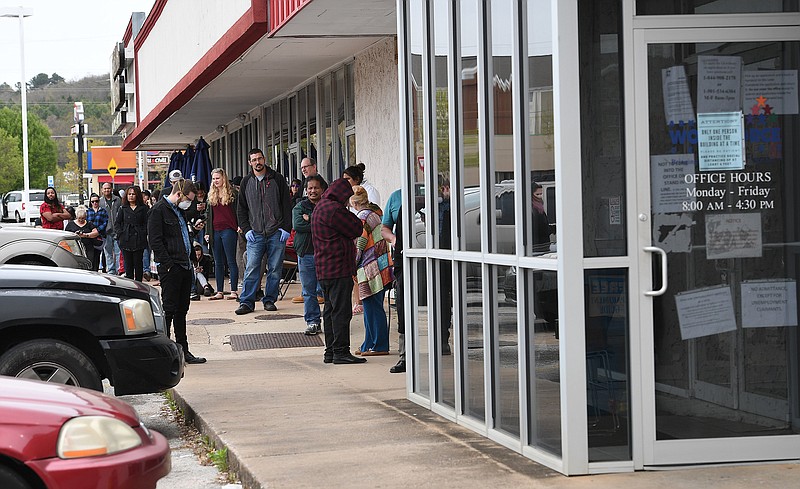 A line of around fifty people extends from the door of Arkansas Workforce Center Monday March 30, 2020 in Fayetteville. (NWA Democrat-Gazette/J.T.WAMPLER )

The covid-19 pandemic hit women with children harder than others whether they kept or lost a job, economists and women's advocates say.

The impact of lost wages and career advancement on families with young children will last for years, said Anna Beth Gorman, executive director of the nonprofit Women's Foundation of Arkansas.

"There already existed a gender wealth gap, gaps in pay equity and business ownership between men and women," she said. "There were gains being made. The pandemic wiped that out.

"We have two economies, the gray economy and the mainstream," Gorman said. The "gray" economy consists of things such as child care, including day care.

"I can't call it a silver lining, but one thing the pandemic shows us is the two really are the same. The mainstream business economy can't do without the other."

Women made up 46% of the U.S. labor force before the pandemic, but account for 54% of the lost jobs to date, according to a recent study by McKinsey & Co. analysts.

Family responsibilities such as taking care of children or older relatives increased an average of 1.5 to two hours per day during the pandemic for women with children -- tasks where women were already spending more time than men, according to research cited by the McKinsey study.

The lopsided impact on women shows in state employment figures, and there's reason to think the same applies in Northwest Arkansas, said Mervin Jebaraj, director of the Center for Business and Economic Research at the University of Arkansas.

Women with children made up a smaller percentage than average of Northwest Arkansas' workforce before the covid-19 pandemic started, figures show.

The average labor participation rate for Northwest Arkansas women who have children younger than 5 years is 66.2%, compared to 75.4% for women in the region with children 6 and older, he said. That 66.2% rate compares to 72.4% in Arkansas as a whole and 71.2% in the United States.

Fewer women in Northwest Arkansas qualify for government assistance for day care because wages are higher here on average than in the rest of the state, Jebaraj said.

One mother of three young kids who kept her job said she questioned her decision every day for much of the year.

Sonia Spinks of Bentonville is senior director for beauty-related products at Walmart headquarters. Her children range in age from 5 to 11 years. The family adjusted to working and schooling from home with the hope the pandemic would be under control over the summer, allowing the children to go to school. She had the good fortune to live next door to a family with a 15-year-old daughter who could babysit at times, Spinks said.

The division of the company's operations in which Spinks works is the same one responsible for soap, hand sanitizer, toilet paper and other items that were in high demand and short supply as the covid crisis grew.

Then her husband's mother, a nurse in Pine Bluff, became one of the first victims of the pandemic in Arkansas, she said.

"This was in March of 2020. She had to be put on a ventilator at the hospital and almost died," she said.

"I never worked out before, but then realized you can't take care of anybody else if you don't take care of yourself," Spinks said. She bought used exercise equipment from a neighbor and worked out as much to relieve anxiety as for the physical benefit, she said.

Her youngest child thought an iPad was for play, so he was perplexed at the thought of using it for prekindergarten lessons. Her middle child missed her friends at school terribly, Spinks said. The family persevered through April and May and made it through the school year.

And then they watched the pandemic last and realized schools would still have to deal with the outbreak the next academic year.

The family had the financial means to hire a tutor.

"That's when it really clicked for me how privileged and blessed we are," Spinks said.