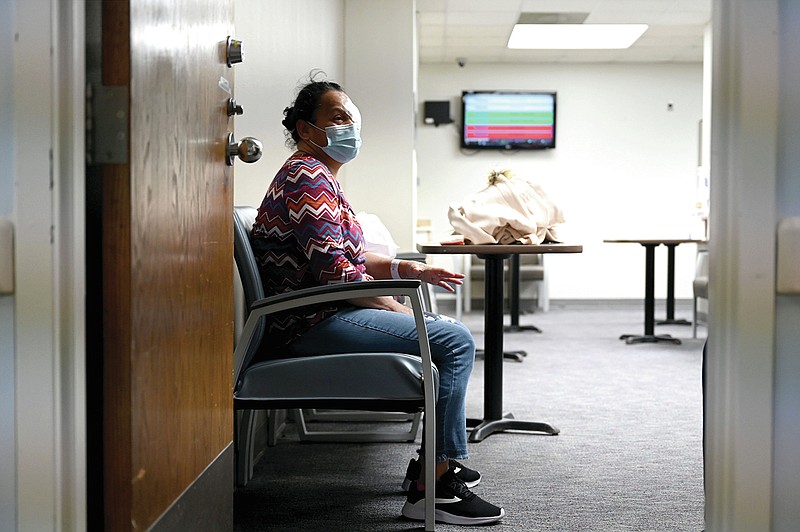 Carol Hiram sits in a post-surgery recovery room with a bandage on her eye after undergoing eye surgery at UAMS during a "The Gift of Sight" event on Saturday, April 24, 2021. The event provided cataract surgery for about 20 members of the northwest Arkansas Marshallese community, including transportation and food, at no cost to the patients. Northwest Arkansas has the largest Marshallese population in the country after many citizens from the Marshall Islands migrated to the United States, beginning in the 1950s, after the US detonated more than 65 nuclear test bombs that destroyed some of their islands and ecosystems. See more photos at arkansasonline.com/425eyes/ (Arkansas Democrat-Gazette/Stephen Swofford)

Libos Gold tried to get the medical insurance she needed for cataract surgery in 2018 but could not get it, she said.

Gold is a native of the Marshall Islands and moved in 2000 to Northwest Arkansas, home of the largest Marshallese population in the United States. She is one of about 20 Marshallese Arkansans who received free cataract surgery Saturday at the University of Arkansas for Medical Sciences' Jones Eye Institute in Little Rock.

"I want to thank God for every plan that he plans and thank UAMS for doing this," Gold said through a translator shortly before her surgery.

Providing surgeries, transportation and food took months of planning and coordination from a variety of entities, said Paul Phillips, the chairman of UAMS' ophthalmology department and the director of the Harvey and Bernice Jones Eye Institute. The project required volunteer medical professionals, donated medical equipment and bus drivers to shuttle patients between Northwest Arkansas and Little Rock.

"If any of these things didn't happen, the project wouldn't happen," Phillips said. "It took every single one of these things to work. As I planned this over three months, it was literally week by week, 'What's going to sink this project?'"

Marshallese workers in the United States live here legally and pay U.S. taxes, and U.S. Census estimates show that Arkansas is home to an estimated 15,000 Marshallese, most of them in Northwest Arkansas.

Marshallese were eligible for Medicaid, a federal health insurance program for the poor and disabled, until a 1996 change in federal law inadvertently took away their eligibility. The Northwest Arkansas UAMS campus has a nonprofit clinic that treats the region's low-income families, which include many Marshallese, and the doctors there found that several Marshallese patients had cataracts but could not afford surgery to remove them.

"They're walking around with treatable conditions that are impairing sight and even causing blindness," Phillips said. "These are cataracts that you don't typically see in the United States. They wouldn't progress this severely for most of the population. Most would go to a physician and get it treated, but because they had no access [to insurance], the cataracts progressed in many of them to the point where they can't even see the big E on the chart."

Removing a cataract takes surgeons only about half an hour and restores a person's sight to "completely normal," a stunning transition for the patients whose cataracts have rendered them essentially blind, Phillips said.

"Tomorrow they will have vision that allows them to get around, read and drive a car," he said.

Marshall Islanders are allowed unrestricted travel to the United States. Their homeland in the Pacific was a U.S. territory before gaining independence in 1979. The United States used some of the islands as a testing site for nuclear weapons while the country was a territory, and the compact granting free travel is in part recompense for the harm done by those tests.

In December, restoring Medicaid eligibility for Marshallese made it into the final version of the second federal covid-19 relief package, thanks largely to efforts by Pacific Islanders and their allies across the United States. U.S. Rep. Steve Womack of Northwest Arkansas' 3rd Congressional District was the first Republican to co-sponsor an earlier House bill that was incorporated into the stimulus package.

However, it could still be "months of paperwork" before Marshallese will officially be Medicaid-eligible again, Phillips said.

Phillips said he hopes the Jones Eye Institute can hold more "cataractathons" every four to six months and restore sight to as many Northwest Arkansas Marshallese as possible, including some of Saturday's patients who have cataracts in the other eye.

The Jones Eye Institute has arranged trips to Central American countries such as Honduras and Nicaragua numerous times to provide the same free surgery to impoverished people, but the covid-19 pandemic made safe international travel impossible over the past year.

"It's not a surprise to do it in other countries, but to find [severe cataracts] in a group that lives three hours from here, that's pretty dramatic," Phillips said.

All recipients of Saturday's operations tested negative for the coronavirus and many had been vaccinated against it beforehand, Phillips said. Additionally, all of the recipients participated in every step of the process, from the pre-operational exam to the covid test, and some were willing to take Saturday off work if necessary, he said.

Carol Hiram, who has lived in Arkansas since 2006, does not have a job at the moment because the cataract in her left eye made it difficult to find one. Now that she has had the cataract removed, she will start looking for a job, probably in a restaurant or a day care, she said.

Like Gold, Hiram expressed gratitude to God and UAMS for the free surgery.

"I've been looking forward to this day for three years," she said through a translator.