Sikh members stunned by another shooting 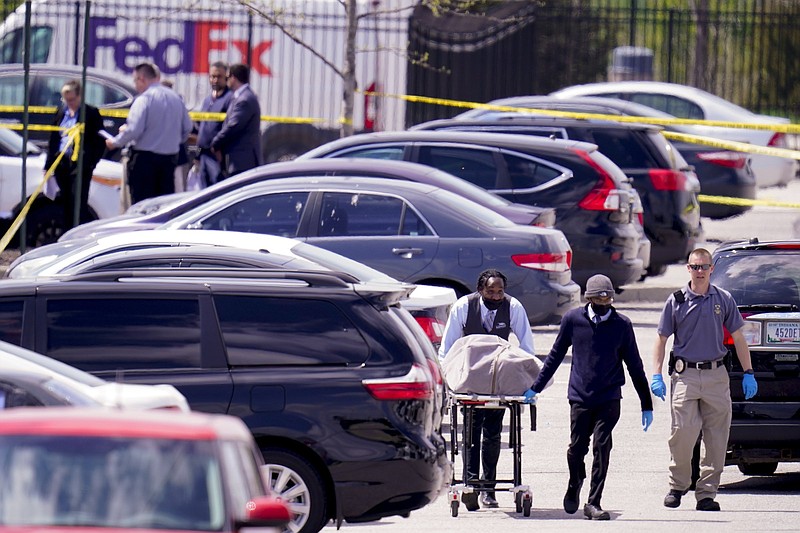 A body is taken from the scene where multiple people were shot at a FedEx Ground facility in Indianapolis on April 16. A gunman killed several people and wounded others before taking his own life in a late-night attack at a FedEx facility near the Indianapolis airport, police said. (AP/Michael Conroy)

INDIANAPOLIS -- Ajeet Singh had to steel himself for a return to work at a FedEx warehouse in Indianapolis on Tuesday for the first time since a former employee shot eight people dead, including four members of Indianapolis' tightly knit Sikh community.

"I've been scared to go back," Singh said. "I don't know why this happened still. Was it random, or was it because of who I am?"

While the motive for last week's rampage remains under investigation, leaders and members of the Sikh community say they feel a collective trauma and believe more must be done to combat the bigotry, bias and violence they have suffered for decades in the country. Amid intense pain, they're channeling their grief into demands for gun reform and tougher hate crime statutes, and calls for outsiders to educate themselves about their Sikh neighbors.

"We are time and time again disproportionately facing senseless and often very targeted attacks," said Satjeet Kaur, executive director of the Sikh Coalition, a New York-based group that has urged investigators to examine bias as a possible motive in the shootings.

"The impact on the community is traumatic," she continued, "not just particularly the families that face the senseless violence but also in the community at large because it's community trauma."

In the days since the shootings, the coalition facilitated a call with federal officials in which Sikh leaders in Indiana asked for the appointment of a Sikh American liaison in the White House Office of Public Engagement, among other requests.

A monotheistic faith founded more than 500 years ago in India's Punjab region, Sikhism is the world's fifth-largest religion with about 25 million followers, including about 500,000 worshippers in the United States.

Kaur said that as a relatively young faith with a low population in the Western world, Sikhism is generally not taught in schools to the same extent as other global religions or integrated in policy-making, resulting in misunderstanding and ignorance. Anti-Sikh discrimination can manifest itself in everything from schoolyard bullying and verbal attacks to shocking acts of violence.

Last year a man accused of running over the Sikh owner of a suburban Denver liquor store after reportedly telling him and his wife to "go back to your country" was charged with a hate crime and 16 other counts including attempted murder.

BECAUSE OF HIS TURBAN

The latest killings dredged up painful memories for Rana Singh Sodhi, an Indian immigrant living in Arizona. He has spent nearly two decades preaching love and tolerance after his brother was shot dead four days after 9/11 by a man who mistook him for a Muslim because of his turban. Balbir Singh Sodhi was the first of scores of Sikhs who were the target of hate crimes in the aftermath of the 2001 terror attacks.

"It's very painful," Rana Singh Sodhi said. "I hope one day ... people will love each other and enjoy the life and working together and living together in this beautiful country."

There are between 8,000 and 10,000 Sikh Americans in Indiana, where they began settling more than 50 years ago and opened their first house of worship, known as a gurdwara, in 1999.

Most of the employees at the FedEx warehouse are members of the community. Gurinder Singh Khalsa of the Indiana-based Sikh Political Action Committee said many Sikhs live on Indianapolis' west and south sides, making the facility's airport location a convenient place to work.

On Monday his committee said it had set up a task force to seek answers about the shooting and to press government officials to take action. An important goal, Khalsa said, is to help people returning to work feel safe.

That would be a relief to people like Gaganpal Singh Dhaliwal, who said two of his aunts had just arrived for their shift at the warehouse when the shooting started. His mother also works there. They all survived, but he's mourning colleagues and friends.

Dhaliwal expressed hope that the tragedy will inspire others to understand the religion and cultural practices better: "To all my fellow Americans, whether Republicans, Democrats, Muslims, Jewish, nonreligious people, everyone: Google the word 'Sikh' today. ... Devote five minutes of your time to be aware about another people around you who may not look like you."

Already he's starting to see some signs of raised consciousness, notably in the flags flying at half-staff outside houses and businesses across Indianapolis and an "outpouring" of support to fundraisers for victims' families. He urged more people to build bridges to his community.

'GO TALK TO THEM'

"If you see a person like me wearing a [turban] on the head -- in your street, in your grocery shop, at your workplace -- go talk to them," Dhaliwal said. "Tell them you know who Sikhs are, or give them a hug and say, 'Hey, you're welcome in the U.S.' Right now we're a community that needs a lot of support, and to know that we have a place in this place called America."

The killings have reverberated nationwide. Pardeep Singh Kaleka, executive director of the Interfaith Conference of Greater Milwaukee and the son of one of seven fatal victims of a 2012 mass shooting at a gurdwara in the suburb of Oak Creek, Wis., said there are concerns about an escalating threat of violence.

And in California, Tejpaul Singh Bainiwal, a Stockton Gurdwara Sahib member and student of early Sikh American history, said he's grappling with a range of emotions including "anger, hurt, hopelessness and a feeling of not belonging." Frustrating, he said, is that much of the public focus has been on the shooter's mental state rather than the community he wounded so deeply.

"I am tired of the same old narrative," said Bainiwal, who was born and raised in the United States but has been told to "fit in."

In Indianapolis, the Sikh community is focusing on helping the bereaved, who are hoping to secure roughly two-dozen fast-tracked visas so relatives overseas can travel for funeral rites set to take place in the next two weeks. The proceedings will begin with cremation and then be followed by up to 20 days of reading of the 1,400-page Guru Granth Sahib scripture, Dhaliwal said.

Earlier last week the home of Sukhpreet Rai bustled with happy chatter and kitchen activity amid celebrations of Vaisakhi, a major Sikh holiday festival, and a forthcoming family birthday. Now it has fallen silent in mourning for two of her relatives, Jasvinder Kaur and Amarjit Sekhon.

"We were supposed to be celebrating a birthday and being together as a family," Rai said. "We're together, and we have one another, but it's for something different -- it's for a funeral."

Information for this article was contributed by Anita Snow and Gary Fields of The Associated Press. 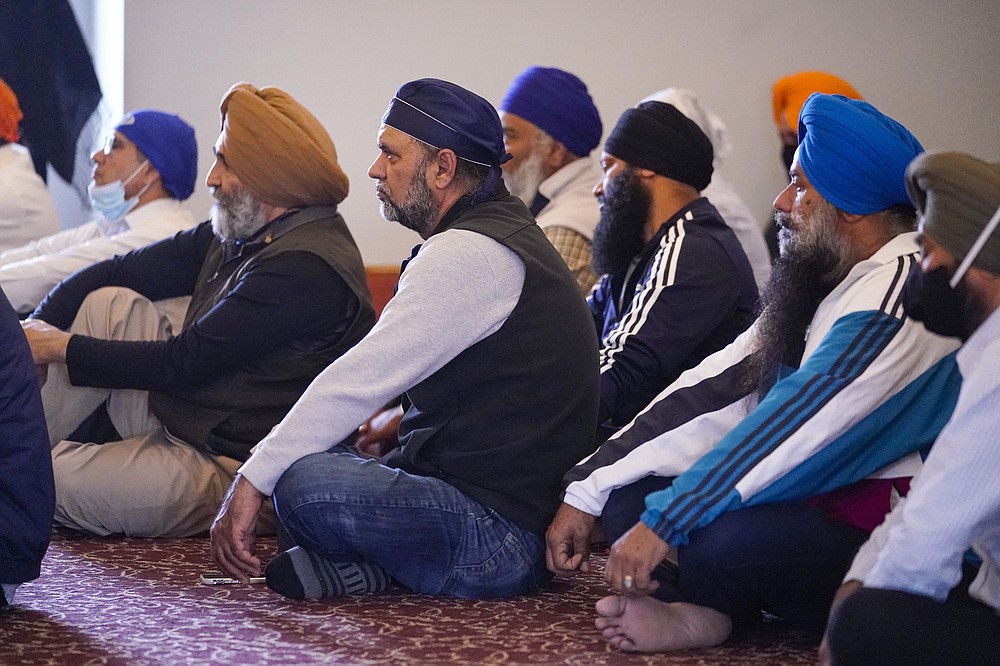 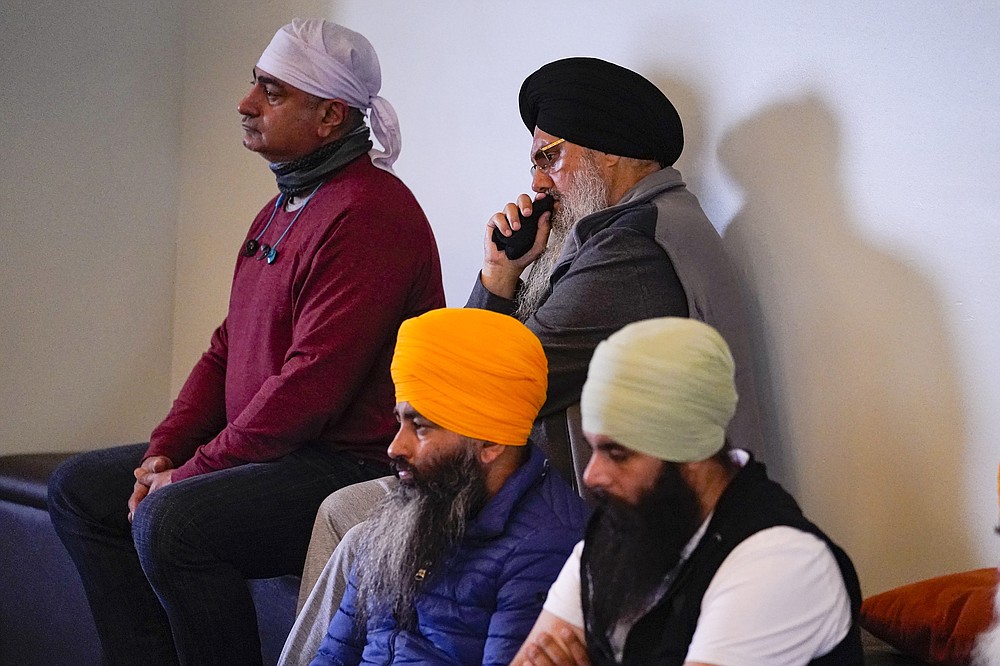 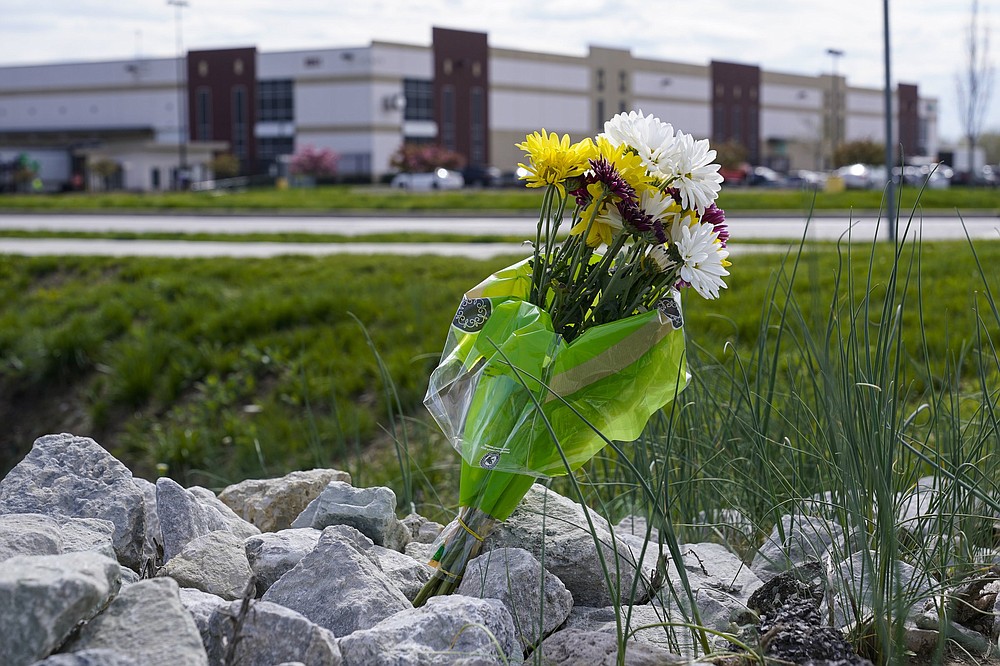 A single bouquet of flower sits in the rocks across the street from the FedEx facility in Indianapolis on April 17 where eight people were shot and killed the day before in the latest in a spate of mass shootings in the United States after a relative lull during the pandemic. (AP/Michael Conroy)
ADVERTISEMENT