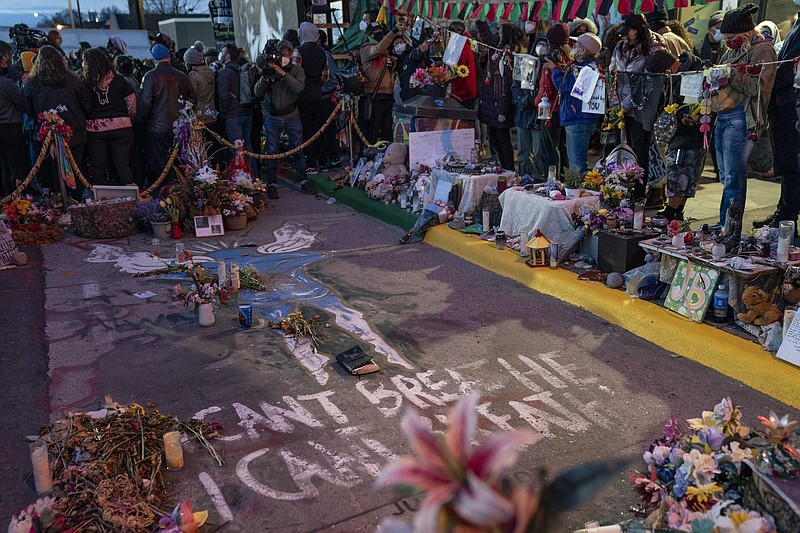 Demonstrators gather around the pavement where George Floyd was murdered outside Cup Foods on May 25 to celebrate the conviction Tuesday of former Minneapolis police officer Derek Chauvin in his death in Minneapolis. (AP/John Minchillo)

Faith leaders in Minnesota and across the United States expressed hope that their advocacy work for racial justice will gain momentum from the guilty verdict rendered against Derek Chauvin, the former police officer convicted of killing George Floyd.

"It's very encouraging for our overall work around racial justice to see the system, in this case, work," said the Rev. Curtiss DeYoung, CEO of the Minnesota Council of Churches. "It makes us believe even more in God."

Stacey Smith, a member of the council's board and presiding elder of the African Methodist Episcopal Church in Minnesota, suggested Tuesday's murder conviction could energize the council's recently launched "truth and reparations" initiative.

Envisioned as a 10-year campaign, the first-of-its kind initiative seeks to address social justice concerns of Black people and American Indians in the context of past violence and oppression they experienced.

"My prayer is that this does really invigorate all of us to want to work on the things that really matter ... breaking down the barriers of white supremacy, providing access to those who have been marginalized," Smith said. "I'm happy about what has taken place and the verdict -- but I know there's tons of work that needs to be done. It's just the beginning."

Erich Rutten, the white pastor of St. Peter Claver, a Roman Catholic church in St. Paul, Minn., with a predominantly Black congregation, said one of his parishioners texted him after the verdict to say, "Thank God -- literally."

"I feel relieved," Rutten said. "It feels like this represents a shift towards holding police to a higher standard of accountability."

The Rev. W. Seth Martin, the Black pastor of Brook Community Church in Minneapolis, said the verdict would reinforce the solidarity of his multiracial congregation.

"When we are all together, protesting, doing spiritual things, and then we see real, tangible outcomes, it gives us more encouragement," he said. "It definitely feels like we're on the right track."

Christopher Johnson, an assistant pastor of Good Hope Missionary Baptist Church who grew up with Floyd in Houston's Cuney Homes public housing, hailed the verdict as a historic moment and a litmus test for the criminal justice system.

"What we just witnessed was the wheels of justice turning finally in the direction of minorities in this country," said Johnson, who wore a red T-shirt that read, "I can't breathe," the words uttered by his friend several times while handcuffed and pinned at the neck under Chauvin's knee.

"This is going to have global ramifications on both sides of the issue," Johnson said. "For police officers, they now have to think twice about how they interact with minorities. For those who are being policed, we understand that this could possibly signify a change in law enforcement's attitude toward Black and brown people in this country."

The Rev. Dr. William J. Barber II, co-chair of the Poor People's Campaign and a prominent racial justice advocate, agreed with others that there is still work to be done.

"We must meet this public act of justice and accountability with federal legislation that will hold officers of the law accountable in every state," Barber said. "And we must continue to work in every community to shift public investment from overpolicing poor, Black and brown communities to ensuring restorative justice and equity for all people."

The verdict comes as the nation's largest Protestant denomination, the Southern Baptist Convention, is roiled by racial tensions. Some Black pastors have left and others are voicing dismay over pronouncements by the denomination's six seminary presidents -- all of them white -- restricting how the subject of systemic racism can be taught at their schools.

One of the convention's most outspoken Black pastors, the Rev. Dwight McKissic of Cornerstone Baptist Church in Arlington, Texas, welcomed the guilty verdict.

"We can see to it that no one else ever faces the awful killing experienced by George Floyd and countless others," said the Rev. Russell Moore, head of the denomination's public policy arm. "And, as we do so, we can weep. Even as we are glad for justice done, we should weep for injustices still at work, and for a life that is still gone."

• Bernard Hebda, Catholic Archbishop of Minneapolis: "The decision by a jury of peers punctuates the grief that has gripped the Twin Cities in these last months and underscores the soul-searching that has taken place in homes, parishes and workplaces across the country as we together confront the chasm that exists between the brokenness of our world and the harmony and fraternity that our Creator intends for all his children."

• The Rev. Bernice King, CEO of The Martin Luther King Jr. Center for Nonviolent Social Change: "Oh, that George Floyd were still alive. But I'm thankful for accountability. The work continues. Justice is a continuum. And America must bend with the moral arc of the universe, which bends toward justice."

• The Right Rev. Mariann Edgar Budde, Episcopal bishop of Washington; the Very Rev. Randolph Marshall Hollerith, dean of the Washington National Cathedral; the Rev. Canon Leonard Hamlin, Sr., canon missioner of the Cathedral; and the Rev. Robert W. Fisher, rector of St. John's Church of Lafayette Square, in a joint statement: "We pray for God's mercy to surround George Floyd's family and friends as they hold their private grief in the spotlight of an international movement demanding acknowledgement that Black lives matter as much as other lives. ... We also pray for all police officers, for their discernment when on duty and for their safety. We pray for those in civic leadership during this time of unrest and racial reckoning, that they will use their authority for the good of all. George Floyd's tragic death has prompted a national reckoning on racial injustice, and rightfully so."

• Rabbi Jonah Dov Pesner, senior vice president of the Union for Reform Judaism: "Today's jury decision finding Derek Chauvin guilty on all counts ends an important chapter in the pursuit of justice. ... Yet the national outcry for racial justice sparked by George Floyd's murder continues across the United States and world as we pursue an end to the systemic racism that disproportionately claims the lives of Black people."

Information was contributed to this article by Emily Leshner of The Associated Press. 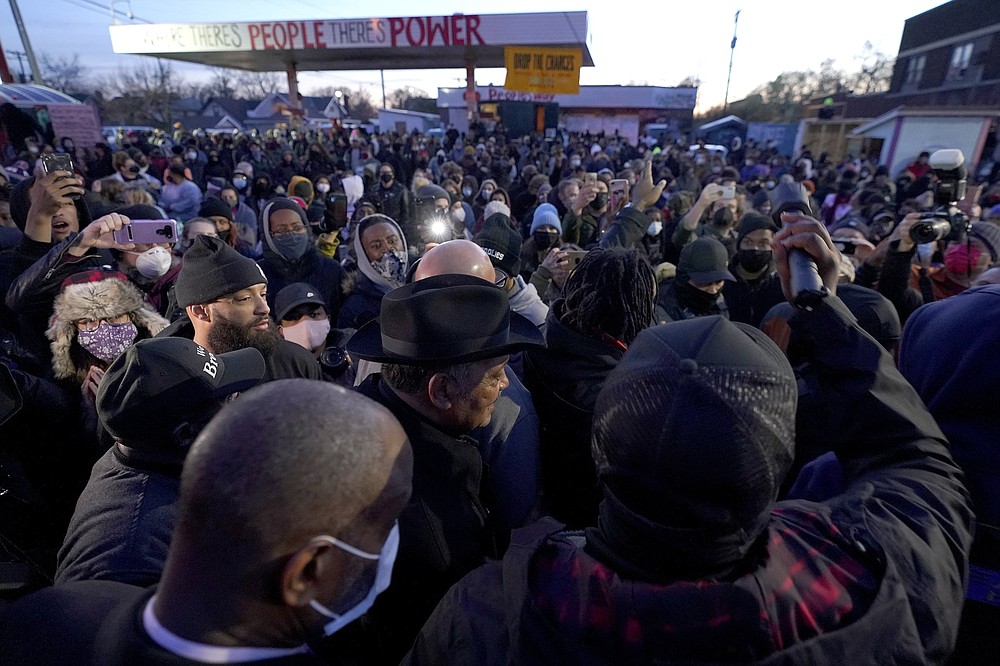 The Rev. Jesse Jackson (center) walks with his security detail at George Floyd Square after a guilty verdict was announced at the trial of former Minneapolis police Officer Derek Chauvin for the 2020 death of Floyd on Tuesday in Minneapolis. Chauvin has been convicted of murder and manslaughter in Floyd’s death. (AP/Julio Cortez)
ADVERTISEMENT