'Pursued' can still pack a punch 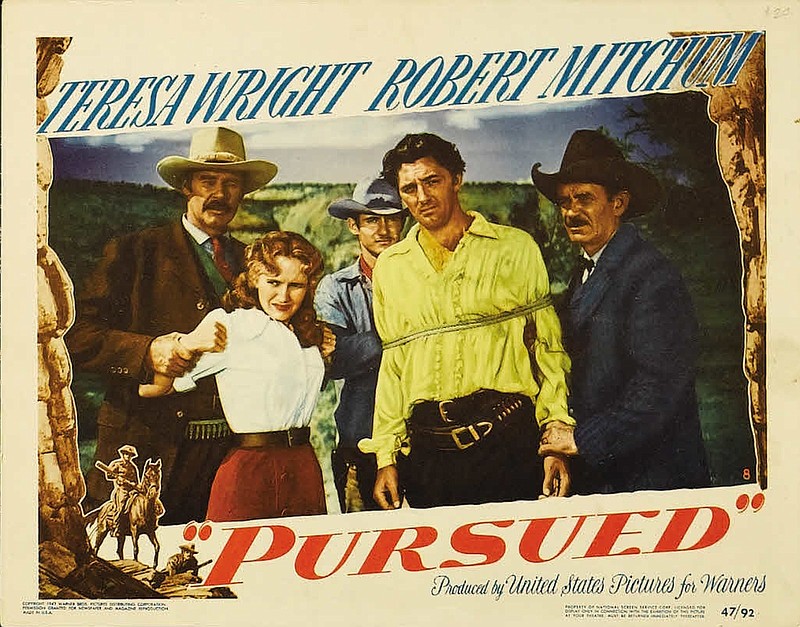 What is film noir? According to my Webster's New World Collegiate Dictionary we get the term from the French, which literally means black film, "a type of film, especially from the 1940s and 1950s, fatalistic, pessimistic, or cynical in mood and often dealing melodramatically with urban crime and corruption."

OK, now comes "Pursued" from Warner Bros. in 1947 -- a Western -- which includes all of the above (except the urban part) plus a whole lot more: secrets, lies, guilt, obsession, infidelity, jealousy, adultery, revenge, treachery, nightmares, feuds, murder, fratricide and a touch of incest. And shot by the esteemed James Wong Howe in New Mexico in glorious black and white with music by Max Steiner.

The first time I saw "Pursued" I didn't know what I was watching. But this film is a Western and a film noir, and "Pursued" is something to see.

A large part of the story is told in flashback. The film begins with a woman (Teresa Wright) swiftly riding her horse through the New Mexico landscape to a burned-out farmstead, which is her husband's hideout. That farmstead is also where his family was killed many years before.

Robert Mitchum plays her husband, the grown-up Jeb Rand, whose family was murdered right in front of him when he was a small boy. He is haunted by that faint memory with nightmares all through his life.

Young Jeb (played by a child actor) is discovered hiding in the basement by Ma Callum (Judith Anderson) who has some terrible memories of her own. She takes the boy back to her house and rouses her two children. They pack as fast as they can to escape the wrath of her brother-in-law, who killed Jeb's family. He is Grant Callum (Dean Jagger), who has sworn revenge on "the last Rand left alive."

Does this sound like any Western you've ever seen? Greek tragedy, maybe.

A few years pass and someone takes a shot at Jeb, who is now 10 and riding his colt in a pasture. His horse is killed instead. Jeb runs back home to face Adam, whom he thinks killed the horse. They fight. Ma breaks it up and when Jeb tells Ma what happened, she instantly knows who tried to kill him. She goes to town to confront Grant who admits his aim was bad. She demands money for the colt and he gives it to her. She tells him she'll use it to raise Jeb. Grant says that the boy will start asking questions about the night she found him and that he will someday bring tragedy to her and her family -- being a Rand and all.

Jeb (now played by Mitchum) eventually falls in love with Thor (Wright) and she with him. Adam (John Rodney) gets more and more jealous of their love. This leads to tragic occurrences for all concerned.

To give away more of the plot would spoil it for those who have yet to see "Pursued." And being a film noir, you know things will probably end badly for the characters. And remember Greek tragedy?

All the actors excel in their roles. As Jeb, Mitchum is perfect in the role of man haunted by his past. And Jagger's Grant is one of the most vile characters on film. His obsession with wiping out the entire Rand family is what drives the narrative.

Available for rent or purchase on most major streaming platforms