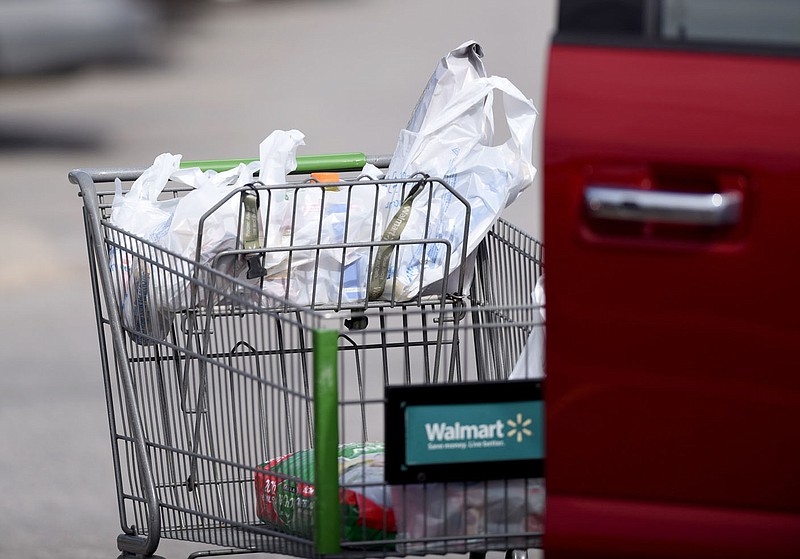 Recently purchased groceries are transported in plastic bags are visible Feb. 27, 2020, in the parking lot of the Walmart Neighborhood Market on Martin Luther King Drive in Fayetteville. The city adopted a ban on single-use polystyrene foam containers and was considering a 10-cent fee on plastic bags that has been rendered unenforceable by recent state law. (File photo/NWA Democrat-Gazette/David Gottschalk)

FAYETTEVILLE -- A state law passed recently likely nullifies the Fayetteville prohibition on single-use expanded polystyrene foam containers, and certainly prevents the enactment of a fee on plastic bags, according to the city attorney.

A House bill sponsored by state Rep. David Ray, R-Maumelle, became law Monday, but doesn't take effect until 90 days after the legislative session ends. The measure prohibits cities and counties from regulating various types of containers and bags from restaurants and grocery stores.

The City Council in November 2019 passed a ban on expanded polystyrene foam containers, commonly known as Styrofoam, as a way to reduce the amount of the material going into the landfill. City officials also contend the material is made from fossil fuels and can break into tiny particles that get into waterways.

Fayetteville's ordinance went into effect in July. Peter Nierengarten, the city's environmental director, said there hasn't been enough time to study whether the measure helped accomplished the goal. It appeared most, if not all, businesses complied, he said.

"We enacted some significant change in terms of business activities in the city," Nierengarten said. "We're hopeful and optimistic that most of that change

About 45 businesses were granted an extension on the July deadline. By October, all were in compliance.

City Attorney Kit Williams issued a memo Thursday to the City Council saying the city likely won't be able to enforce its container ordinance once the state law goes into effect. A note also will need to be added to city code saying the ordinance no longer is enforceable because of the state law.

"It is ironic that on this Earth Day established by a Republican president about a half century ago to encourage increased efforts to end pollution and protect our environment and our citizens' health that I must report to you that the Republicans in our Legislature have ensured that single-use expanded polystyrene foam products will soon again litter our city," Williams said in the memo.

By keeping the ordinance on the city's books, it could go back into effect if the state law is ever repealed, Williams said. Repealing the ordinance would require a majority of the City Council to vote to remove it from city code, he said.

Boynton Beach, Fla., for instance, offers a 10% discount on its commercial recycling rate for businesses that meet criteria such as offering plastic straws upon request only and keeping a litter control checklist, according to WPTV in West Palm Beach, Fla.

In San Diego, a nonprofit group runs an expanded polystyrene foam reduction program that businesses can join. In exchange, the nonprofit group promotes the business as ocean friendly, according to the Center for Sustainable Energy, a national advisory organization.

Ray said earlier this month his bill was about uniformity in commerce across the state.

"This bill doesn't just impact grocery stores; it impacts convenience stores, it impacts our restaurants that serve straws, all sorts of things," Ray said. "Our businesses buy these products in extremely large quantities to take advantage of economy of scale, and so having a patchwork regulatory framework impedes their ability to do that."

Fayetteville is the only city in the state to adopt a ban on single-use expanded polystyrene foam products.

The city also considered placing a 10-cent fee on single-use plastic and paper bags. The item was put on hold because it was on the City Council's agenda in early March 2020 at the onset of the covid-19 pandemic.

Council Member Teresa Turk sponsored both single-use product proposals and said she intended to bring back the bag-fee item once the pandemic ended.

"If state law nullifies it, I don't see any reason to pursue it if we can't enforce it and make it happen," she said. "It seems like it would be a waste of everybody's time."

Turk questioned the idea uniformity in commerce motivated the state law. Local control seems to only suit certain members of the Legislature when it's an issue they agree with, she said.

"It's a well-worn old tactic that's been used by less progressive members of the state Legislature," Turk said. "You can't talk out of both sides of your mouth. They need to be uniform in their approach to government, and it seems like it changes with whatever particular level of power they may be in."