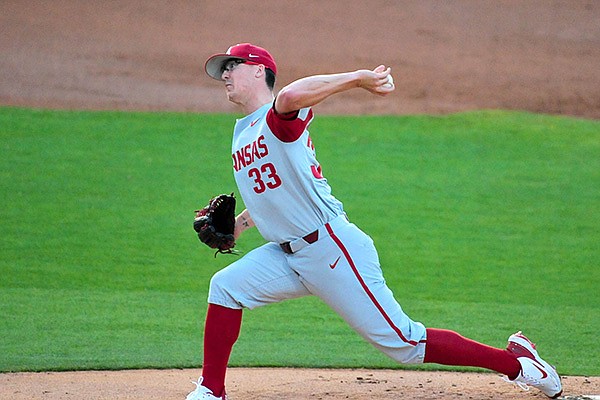 Arkansas left hander Patrick Wicklander allowed one run in a career-high seven innings to lead the top-ranked Razorbacks to a 5-1 series-clinching victory at No. 11 South Carolina on Friday night.

Wicklander allowed 2 hits, hit 2 batters, no walks and struck out 5. Wicklander got South Carolina leadoff hitter Brady Allen to pop up on a 3-2 pitch in the game’s first at-bat and didn’t go to a three-ball count again during his 83-pitch outing in which he faced 25 hitters.

It was only the second time in 25 career starts that Wicklander did not issue a walk. The only other time was March 26, 2019, in a two-inning start against Missouri State.

South Carolina was two-hit for the second time in the series. The Razorbacks held an opponent to two hits for the fifth time this season.

Arkansas (32-7, 13-5 SEC) bounced back after a 6-2 loss to the Gamecocks in the first game of Friday’s doubleheader, when South Carolina rallied from a two-run deficit in the sixth inning.

The Razorbacks never trailed in the nightcap. Casey Opitz, Jacob Nesbit and Jalen Battles hit three consecutive singles to lead off the second inning. Battles’ hit scored Opitz, and Nesbit scored on a fielder’s choice by Zack Gregory to give Arkansas a 2-0 lead.

Wicklander (2-1) made his biggest mistake in the third inning when he hung a 1-2 pitch to Allen, who crushed a solo home run to left field with two outs to cut the Razorbacks’ lead in half.

Arkansas’ Cayden Wallace answered with a two-out, two-run homer in the fifth to put the Razorbacks ahead 4-1.

Arkansas handed South Carolina starter Will Sanders his second loss. Sanders, a freshman right hander, allowed 4 runs on 6 hits in 5 innings. He walked one and struck out three.

Right hander Julian Bosnic provided the Gamecocks with 2 2/3 innings of strong relief. Arkansas scored an unearned run against him in the seventh inning when Battles walked with one out, advanced on a wild pitch and scored on a two-out fielding error by shortstop George Callil.

Arkansas stranded nine runners in both games of the doubleheader.

Kevin Kopps pitched the final two innings for the Razorbacks in a non-save situation. Kopps struck out all six batters he faced in 25 pitches.

Arkansas won its fourth road series this season. The Razorbacks improved to 12-3 in games away from Fayetteville, with wins over seven potential regional hosts that are ranked in the top 15 of this week’s USA Today Baseball Coaches Poll — Texas Tech, Texas, TCU, Louisiana Tech, Mississippi State, Ole Miss and South Carolina.

Arkansas is not scheduled to play again until next Friday at LSU.

Gregory goes down on strikes to start the inning. South Carolina has struck out 10 Arkansas batters today.

Wallace hits a ball that just lands outside of the reach of the center fielder, shortstop and second baseman in center field.

Lloyd balks before his next pitch and that moves Goodheart to third and Wallace to first.

Slavens hits a ball up the middle that bounces off the pitcher's glove, but is fielded by the second baseman and Slavens is out at first to end the inning.

Kevin Kopps comes in to pitch for Arkansas.

Kevin Kopps is dealing once again tonight. Three strikeouts on three batters. He's even got the curveball working today.

Slavens strikes out swinging to start the inning.

Franklin is walked on four pitches.

Bosnic throws over to first on a pick off and throws it away. Franklin goes from first to third on the error.

Moore strikes out for the second out.

Opitz works a 3-2 walk and there are runners on the corners for Nesbit.

Daniel LLoyd comes in to pitch for South Carolina after Bosnic falls behind Nesbit 2-0.

LLoyd misses out and low to walk Nesbit. Fun baseball scoring trivia. Since Bosnic threw the first two balls to Nesbit that walk goes against his line. So he's walked four.

Battles pops up to short center field to end the inning.

Nesbit strikes out swinging to start the inning.

A ball in the dirt allows Battles to advance to second and that will prompt a mound visit from the Gamecocks pitching coach.

Gregory hits a slow roller to short, the shortstop charges and throws to get the out, but Battles advances to third.

Goodheart hits a ground ball up the middle, the short stop Callil can't handle it. That's an error against Callil and the Hogs extend their lead.

Goodheart steals second, but is stranded there as Wallace strikes out swinging.

Just make contact. Anything can happen when the ball's put in play.

Wicklander gets the first batter to pop up to first for the first out.

He then hits the next batter on the knee, basically the same spot he hit the batter in the previous inning.

Then a groundout to third and a slow roller back to the pitcher end the inning.

The six complete innings from Wicklander are tied for his longest outing of the season. The other came against Auburn.

Christian Franklin is hit by a pitch to start the inning and Sanders' day is done.

Left handed Julian Bosnic in to pitch for South Carolina.

Bosnic gets Moore to strikeout, catches Franklin running to second on a pick off move and then strikes out Opitz to end the inning.

Wicklander starts the inning with a pop fly to Nesbit for the first out.

Wicklander bounces a pitch off the knee of the next batter, but he works around it by inducing a flyball to right and a groundout to Moore to end the inning.

Battles goes down on strikes. Gregory works a walk, but then Goodheart follows with a strikeout.

Cayden Wallace wait on a slider and deposits it beyond the left field wall to give the Hogs a 4-1 lead.

Slavens grounds out to first to end the inning.

Bombs Away 💣@cayden_wallace's two-run, two-out dinger left no doubt. None.

Wicklander strikes out the first two Gamecocks and then gets a flyout to left-center field to end the inning.

Wick has five Ks. All swinging.

Opitz gets a two-out single, but that's it for the Hogs in the 4th.

Franklin and Moore grounded out to start the inning and Nesbit flied out to short to end the inning.

Wicklander gets a pop out and a strikeout to start the inning, but then Allen takes him deep to left field to get the Gamecocks on the board.

Wimmer pops up to Moore to end the inning.

Opitz hits a looper right over the shortstop for the first hit of the game.

Nesbit singles to center and Opitz decides to go to third. The throw was not on target, Opitz slides into third safely, Nesbit moves up to second.

Battles comes through with an RBI single through the right side, against the shift. Arkansas has scored first in every game this series.

That prompts a mound visit from South Carolina's pitching coach.

Gregory grounds to the second baseman, they go to second for one, but can't make the turn. Nesbit scores.

Goodheart up and he singles through the right side. Gregory has to stay at second.

Wallace pops up to the shortstop in left field for the second out.

Slavens flies out to end the inning.

Wicklander works around a leadoff single. He got the next batters to flyout, ground into a fielder's choice and then pop up foul. Robert Moore made a fantastic diving play up the middle for the fielder's choice. The turn was about a half second late from being a double play.

Slavens strikes out, Franklin and Moore groundout to end the 2nd inning.

Wicklander gets an infield pop fly before striking out the next two batters to end the first inning.

Arkansas goes in order in the first inning. All three outs were hit to the outfield.

LHP Patrick Wicklander (1-1, 2.38 ERA) is going to start tonight’s game for the Razorbacks.

Game time is set for 6:00 p.m. ARkansas lost the first game of the doubleheader 6-2.

For a recap of that game check out Matt's story here: https://www.wholehogsports.com/news/2021/apr/23/live-updates-arkansas-vs-south-carolina-game-2/