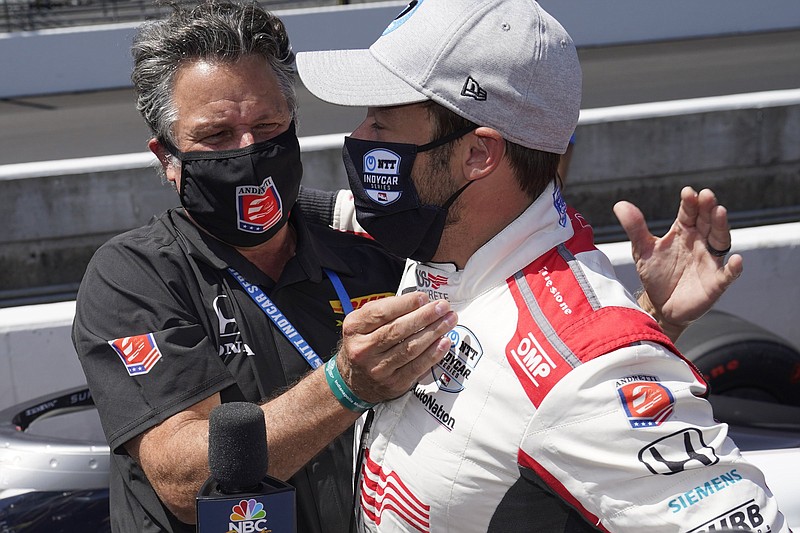 Marco Andretti is congratulated by his father Michael Andretti after Marco won the pole for the Indianapolis 500 last year. Michael, the owner of Andretti Autosport, has expressed optimism for the organization following a 2020 season in which it had one victory. (AP file photo)

ST. PETERSBURG, Fla. -- Alexander Rossi didn't sugarcoat his 2020 season, which was a terrible year at Andretti Autosport. Just one win, never in the championship mix, a driver fired with three races remaining and, worst of all, the team was a non-factor at the Indianapolis 500.

The man running the massive operation is Michael Andretti and he gives Rossi's assessment some validity. But he also believes Andretti Autosport has emerged with at least two legitimate title contenders among four entries Sunday at St. Petersburg. He's down two cars from this time a year ago.

"We're here. We made it out of 2020. We're not going to be out of business," Andretti said in an interview with The Associated Press. "But we're working to make sure we can keep our heads above water and stay competitive. I don't want to have to cut my budget. If I have to cut my budget, our cars are going to go slower and nobody wants that."

Andretti is 58 and has been out of cars full-time since he was 39. He could have kept driving, and physically felt he probably had five more years in him. But he was over it. He had moved on to the next chapter.

There can only be one Mario Andretti, right? At some point you just are Michael Andretti and his career is much different from that of his famous father.

Andretti Autosport will have six cars in the Indianapolis 500, a race Michael Andretti has won five times as a team owner. Rossi and Colton Herta, who had the team's only win last season, could both be considered expected to among the title contenders.

IndyCar is where Andretti Autosport gets most of its attention but Andretti isn't afraid to look beyond his backyard. Andretti Autosport races in Australia and Mexico, and he wants to start an IMSA sports car program for son Marco, who in January said his heart isn't into IndyCar anymore and he only wants to run the Indy 500.

Mario Andretti told AP his son is interested in entering Formula One in some form and Michael Andretti last month announced the formation of a Special Purpose Acquisition Company. The SPAC anticipates being listed on the New York Stock Exchange under the symbol "WNNR" and said in a statement it aims to raise $250 million.

"He's a risk-taker. I'm very proud of what he's doing," Mario Andretti said of his son.

Racing is all Michael Andretti knows and although it doesn't pay the bills -- among the Andretti Group "family properties" is a petroleum consortium of gas stations, car washes and convenience stores up and down the West Coast -- "you need a reason in your life to get up, right?"

"I don't see myself myself doing anything but racing because you need that reason to get up," he says.

Andretti needs to show this year that his IndyCar program is better because Rossi, the 2016 Indy 500 winner, is tired of not winning the championship. Andretti needs him.

Herta, who turned 21 last month, has always been part of the organization. His father, Bryan, was an Andretti driver, part team owner and Marco Andretti's race strategist.

The Hertas this year will be paired on the radio for the first time in IndyCar in a match that never worked with Michael and Marco. The two would end up screaming at each other, but Michael thinks the Hertas can be the exception -- Bobby and Graham Rahal didn't gel either -- and that gives him two strong title contenders.

Ryan Hunter-Reay is on the hot seat, as always, it seems. The 2012 champion, the last driver not from Ganassi or Penske to win the title, turns 41 this year and young talent is coming into IndyCar. Andretti loves the 2014 Indy 500 winner, but said the driver knows he's got to produce this year.

A sixth driver, probably Stefan Wilson, will be added to the Indy 500 lineup alongside full-time driver James Hinchcliffe and Marco Andretti, who will make his season debut next month in that race. Andretti Autosport was struggling last year to sell sponsorship for the third generation racer and Marco told his dad he wanted to do other things.

"As soon as he told me, it was like all the pressure was gone," Michael Andretti said. "He's just happy. That's good for him." 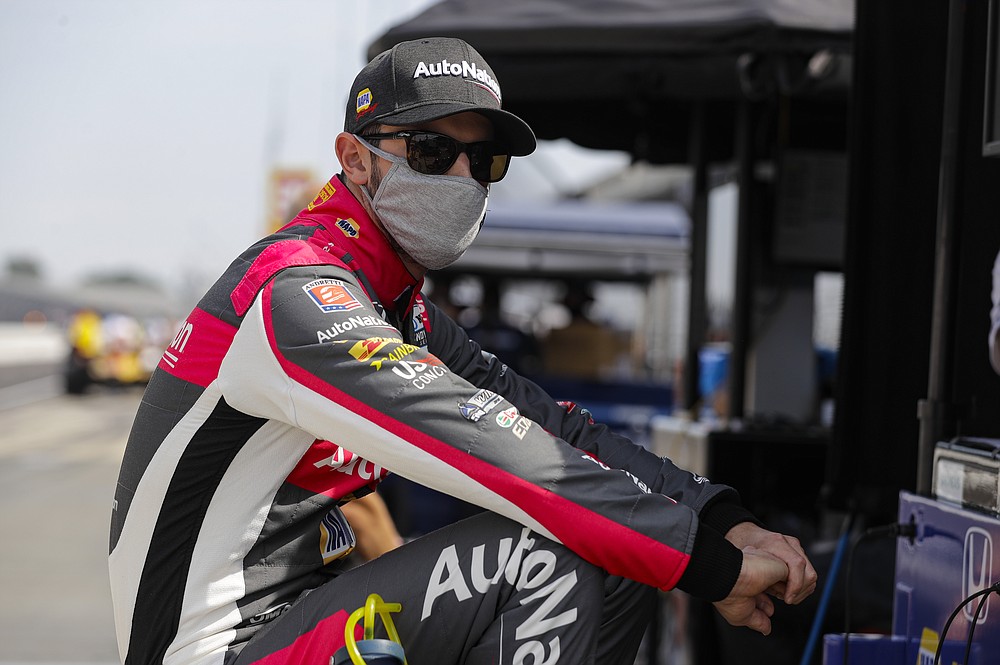 FILE - Race driver Alexander Rossi waits for the start of practice for the IndyCar auto race at Indianapolis Motor Speedway in Indianapolis, in this Friday, July 3, 2020, file photo. Alexander Rossi doesn't mince words about last season, when Andretti Autosport won just one race as an organization. "I just think we sucked globally," he said of the effort. (AP Photo/Darron Cummings, File)