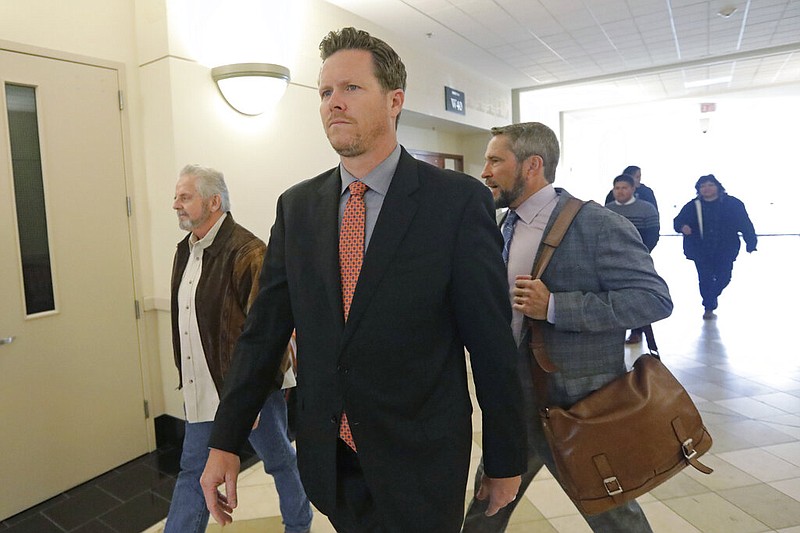 Paul Petersen, an Arizona elected official accused of running a multi-state adoption scheme, arrives at court for an initial appearance on charges filed in the state Friday, Nov. 15, 2019, in Salt Lake City. Prosecutors in three states say Petersen brought pregnant women from the Marshall Islands to the United States and paid them to give up their babies for adoption. He's pleaded not guilty. (AP Photo/Rick Bowmer)

SALT LAKE CITY -- An attorney convicted in an illegal adoption scheme involving women from the Marshall Islands, whose practice included Arkansas, was sentenced to prison for a third time Wednesday.

Paul Petersen, the attorney and a former Maricopa County, Ariz., assessor, received a 15-year sentence in Utah. Petersen already had been sentenced in federal court in Fayetteville to six years and then 10 years in state court in Arizona on similar charges.

Utah Judge Linda M. Jones sentenced Petersen to one to 15 years under Utah's judicial rules, which set a sentencing range, but leave it up to the parole board to decide how long a person serves. Jones said the Utah sentence will run concurrently with the other prison time, which means Petersen could be done with his Utah prison time by the time he completes his other sentences.

Arizona also allowed much of Petersen's state prison time to run concurrently with his federal sentence, but five years on state charges there were set to run after his release from federal prison. In all, Petersen could serve 11 years behind bars.

Petersen illegally paid women from the Pacific island nation to give up their babies in at least 70 adoption cases in Arizona, Arkansas and Utah, authorities say.

Citizens of the Marshall Islands have been prohibited from traveling to the United States for adoption purposes since 2003.

In the scheme, pregnant women were recruited and promised $10,000 in exchange for agreeing to give up their babies for adoption to families in the United States, Utah Assistant Attorney General Daniel Strong said. The women were placed in homes in Arkansas, Arizona and Utah. They often didn't get the full amount of money promised and were deprived of proper prenatal care and crammed into houses where some had to sleep on the floor, he said.

Adoptive families paid about $40,000 per adoption only to find they were snarled in an unethical and illegal scheme, Strong said.

"There is nothing more you can do to me your honor today that I can't already do to myself," Petersen told the Utah judge during sentencing, which was held by video because of pandemic conditions. "I'm in prison now. My family is broken. I haven't seen my kids in three months, and I'm not sure when I will again. They are not watching this, but I apologize to them that I'm going to be gone from their lives."

An Arkansas accomplice of Petersen, Maki Takehisa of Springdale, is set for sentencing at 10:30 a.m. Tuesday in U.S. District Court in Fayetteville.