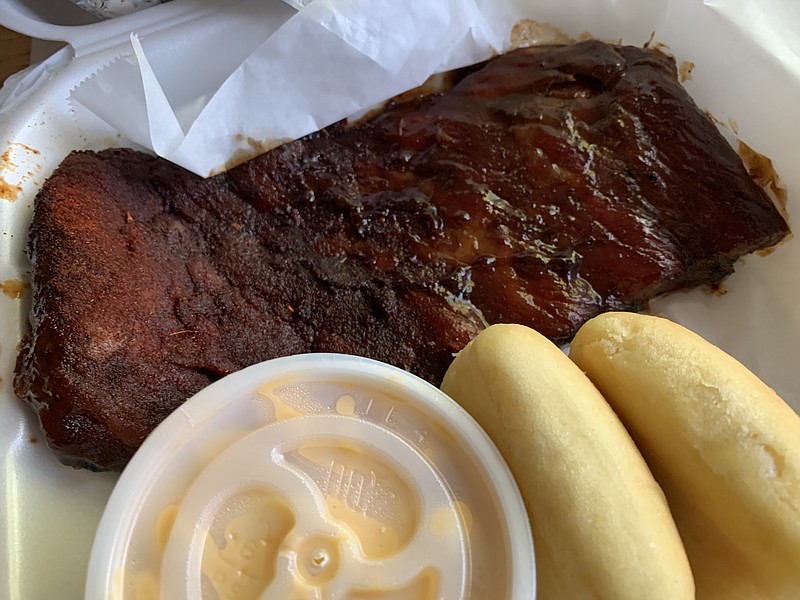 Our half-slab of ribs from Corky's was half "dry" and half "wet," with mac & cheese as one of the two side items. (Arkansas Democrat-Gazette/Eric E. Harrison)

We’re road warriors again this week, though we promise full dine-in reviews are once again on the horizon. This week’s indulgences have been pure Americana — hot dogs, fried shrimp and barbecue.

As per our usual practice, we avoided chains (well, sort of), stayed within our hot-food comfort radius and paid for our meals.

We had been treating Corky’s as a chain place, but that’s really unjust — though its Memphis-based progenitor has a handful of Tennessee locations, the two here (on both sides of the river) are locally owned and operated under a franchise.

Corky’s prides itself on its ribs, so we got some. We ordered our half-slab “half-and-half” — half dry (“basted with Corky’s Original BBQ sauce and sprinkled with Corky’s Dry Rub”) and half wet (“basted with Corky’s Original BBQ Sauce”). The ribs were firm and well cooked, though the meat had to be coaxed/chewed from the bone rather than falling off on its own. We enjoyed, though we were not excited by, the “dry” ribs. The “wet” ribs weren’t that “wet”; the kitchen was somewhat miserly in applying the sauce. If you’re dining in, there are bottles of sauce on the table, but we got no additional sauce in our to-go bag. What we did get, for some reason, was a few packets of ketchup, though we can’t quite figure out exactly what we might have put it on — it certainly wouldn’t have served the ribs very well, nor would it have tasted very good on either of our side items (corn on the cob and a fairly cheesy, slightly tangy mac & cheese).

HOW IT WENT: The dining room is open. We placed and paid for our order at the bar while enduring the shrieks of a child in tantrum (does that make them tantric?) that thankfully ended once the family’s food arrived at their table. Our order took about 15 minutes to come out of the kitchen.

HOW IT’S GOING: The place was not yet busy late in the afternoon but before the main dinner rush, though there were several tables in use and more folks entered steadily throughout. There were, however, no other to-go orders with which to compete. 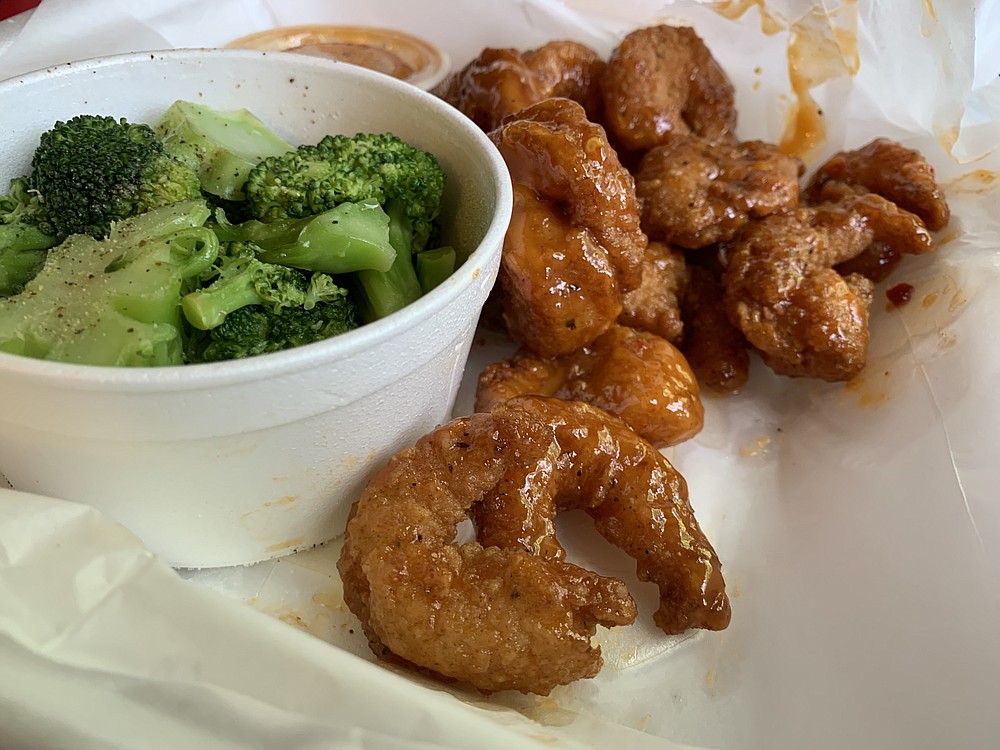 The Sweet Chili Shrimp Basket from All Aboard comes, not with something fried, but with "healthier" steamed broccoli. (Arkansas Democrat-Gazette/Eric E. Harrison)

WHAT WE GOT: Sweet Chili Shrimp Basket ($11.50), half a pound of fried shrimp tossed in sweet chili glaze and served with steamed broccoli and a house-made hush puppy.

We’ve always felt that more than half the fun at All Aboard is hearing that whistle and the automated announcement, “All aboard, delivery on track one,” then watching a little toy train traverse a track just below the ceiling carrying food from the kitchen and dropping it off at the properly designated booth. Which is why we dropped in and ordered in person. It certainly was a bigger draw than the food when we first encountered it, and we still feel the same way today. 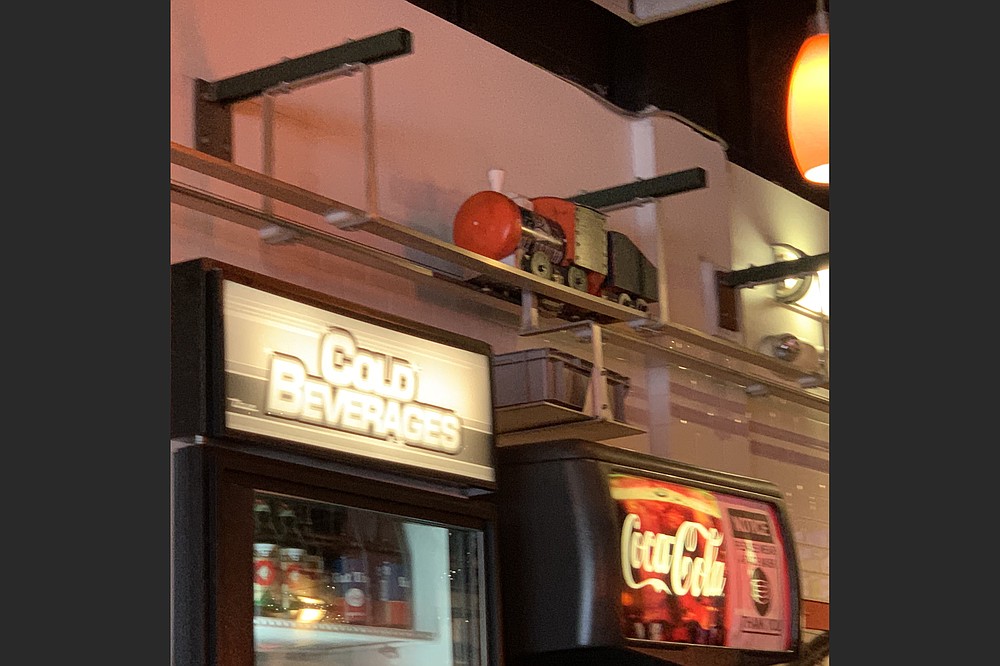 The main attraction at All Aboard isn't the food, but the little train that delivers it. (Arkansas Democrat-Gazette/Eric E. Harrison)

The sweet chili glaze was fine as far as it went, lightly spicy and clinging lightly to the shrimp (and with a generous extra portion in a small plastic cup). But the texture of the coating on the medium-sized shrimp, thick to enhance crunchiness, had a slightly and naggingly unpleasant mouth feel. So while we very much wanted to like it — it’s the bubbly hostess’ favorite thing on the menu, by the way — we gave up after about halfway through. On the side: a large portion of steamed broccoli in a plastic-lidded foam cup — a semi-genius move designed to ease any possible guilt over ordering fried stuff, which covers almost everything on the menu; the comparatively few non-fried options include a range of salads, a turkey club sandwich, some pita-based hand-helds and a veggie Beyond Burger). The broccoli is lightly peppered and most of it is chopped into bits easy to decimate in one bite. The promised house-made hush puppy was AWOL.

HOW IT WENT: It took about 15 minutes for our order to come up; it wasn’t delivered by train, though there’s a “stop” behind the register, so presumably it could have been. Meanwhile, we watched the train “chug” around the track and drop off food to three or four tables …

HOW IT’S GOING: … all filled with families with multiple kids. Though none of them were as “tantric” as the youngster at Corky’s, and the shriek volume wasn’t as individually loud per child, the cumulative effect could be quite wearying upon non-parental ears. 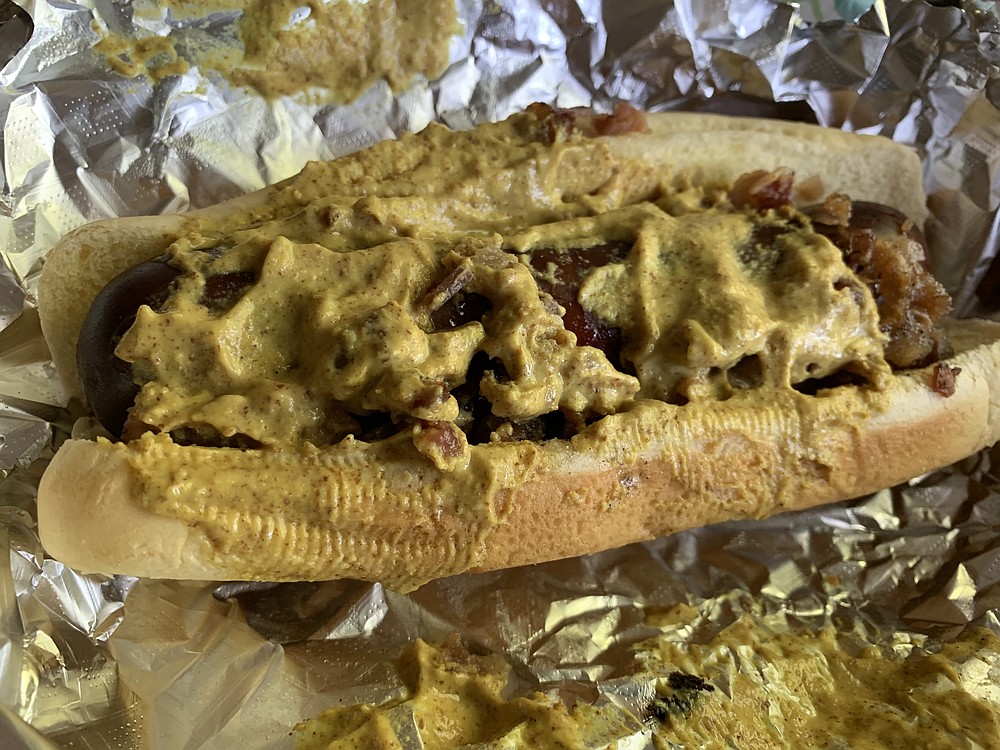 WHAT WE GOT: quarter-pound all beef jumbo dog ($5) with bacon ($1) and spicy brown mustard.

What we envisioned when we spotted this operation on Facebook was a food truck. What we found when we drove onto the Lowe’s lot was a cart — old-fashioned though in some ways newfangled — from which a genial fellow pulls giant hot dogs and slaps them onto fresh full-length buns. For an extra buck, he’ll grill some onions or bacon bits; there may be other toppings, but they’re not on the chart in front of the cart and we didn’t see any evidence of them. Condiments, including relish and two kinds of mustard, are available for customers to add to their own content. Our dog, just wrapped in foil, managed to stay acceptably warm on the way home, though we would have devoured it with equal glee if it hadn’t. Top Dog isn’t just a vendor — it’s a socially conscious vendor, applying proceeds from purchases to feed the homeless and displaced in Central Arkansas.

HOW IT WENT: We waited a couple of minutes while another customer was served, but we were there and out within about five minutes. The “dog server” maintains a playlist of dog-related tunes to enliven the experience; at one point, “Who Let the Dogs Out?” played at top volume.

HOW IT’S GOING: There were a few other walk-up customers.